If you are an anime or manga fan, you may have heard of Banana Fish. But, if you haven’t, Banana Fish is an anime series based on the manga of the same name by Akimi Yoshida.

Banana Fish is about the battle between a mob boss named Dino and a teenage street gang leader, Ash Lynx, who is searching for revenge.

The manga and anime follow Ash Lynx as he discovers a criminal conspiracy involving “banana fish”, a mysterious drug that brainwashes its users. As he investigates banana fish, he meets Eiji Okumura, a Japanese immigrant. The two form a close relationship.

Hailed as a groundbreaking LGBTQ manga and anime, Banana Fish has struck a chord with readers and viewers. Many people relate to the life lessons and fall in love with the characters.

If you are a Banana Fish fan, this large collection of 81 Banana Fish Quotes is sure to delight and inspire you. 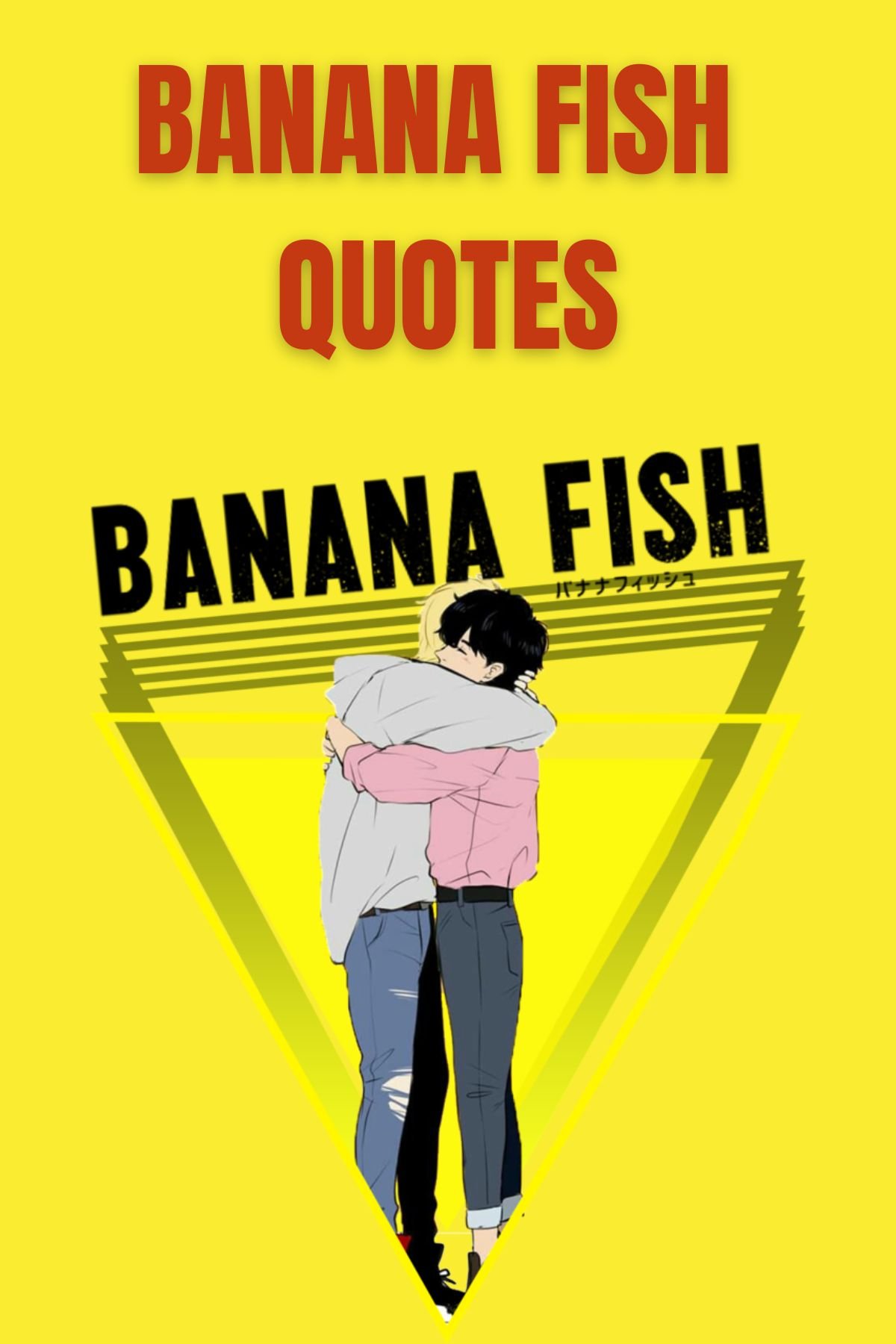 1. “You said to me before, ‘We live in different worlds,’ but I am not sure if that is true. We are from different countries, and our skin and eyes are different colors. But so what? We are friends. Isn’t that enough? What else do we need?” – Eiji Okumura

2. “I know we’ll meet again, no matter how far apart we are. You’re the greatest friend I’ll ever have.” – Eiji Okumura

3. “War is always good business for those in power.” – Ash Lynx 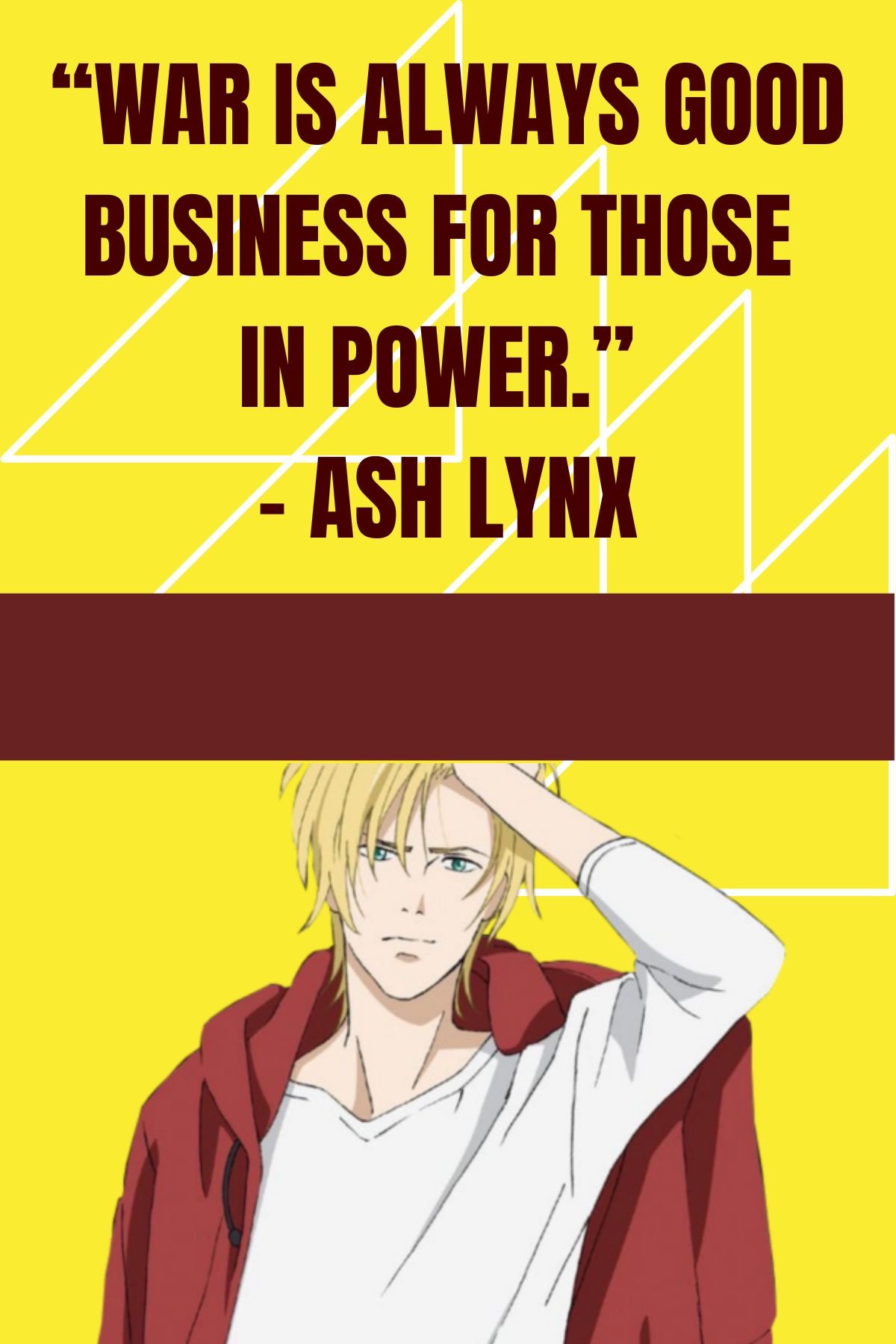 6. “Humans can change their destiny. They have wisdom leopards don’t. Besides, you’re not a leopard.” – Eiji Okumura

7. “That’s right, death. You said I am not like ordinary people. If there was just one thing I’d say that was true about. It is—I’m not afraid of death.” – Ash Lynx

8. “If there really are such things as devils, they’d probably look like you.” – Max Lobo

9. “Logic’s got nothing to do with it! Strength is all that counts!” – Ash Lynx

10. “Innocence can be more dangerous than guns sometimes.” – Max Lobo

11. “People are funny because, of course, they don’t know anything about death. They never experienced it and knew it was something to fear, but they feared it instinctively. There’ve been countless times in my life when I thought I’d be better off dead. That nothing could be worse than what was happening to me right then. At times like that, death looks sweet, and peaceful, and unbearably enticing.” – Ash Lynx

14. “I’m really glad I came to America. I met lots of people, and more than anything, I met you.” – Eiji Okumura

15. “Look, sun’s setting. Sunrise and sunset are about the only times this junkyard of a city looks good.” – Ash Lynx

16. “I wasn’t expecting the law to protect me. I’ve ignored it all my life. I sure as hell don’t plan on hiding behind it now.” – Ash Lynx

17. “Aren’t there any decent parents in this world? It’s not like kids get to choose them at birth, you know, and they can’t exchange them if they turn out to be losers.” – Ash Lynx

18. “I think I wanted to protect you from your future because your fate was sweeping you away like a flood.” – Eiji Okumura

19. “That guy always regarded me as a human being with a real heart, not some sort of tool.” – Ash Lynx

20. “You asked me many times if you scare me, but I never felt scared of you, not even once from the first time I met you.” – Eiji Okumura

21. “My words might not mean anything now, but just remember one thing—even if the world turns on you, I’ll always be on your side.” – Eiji Okumura 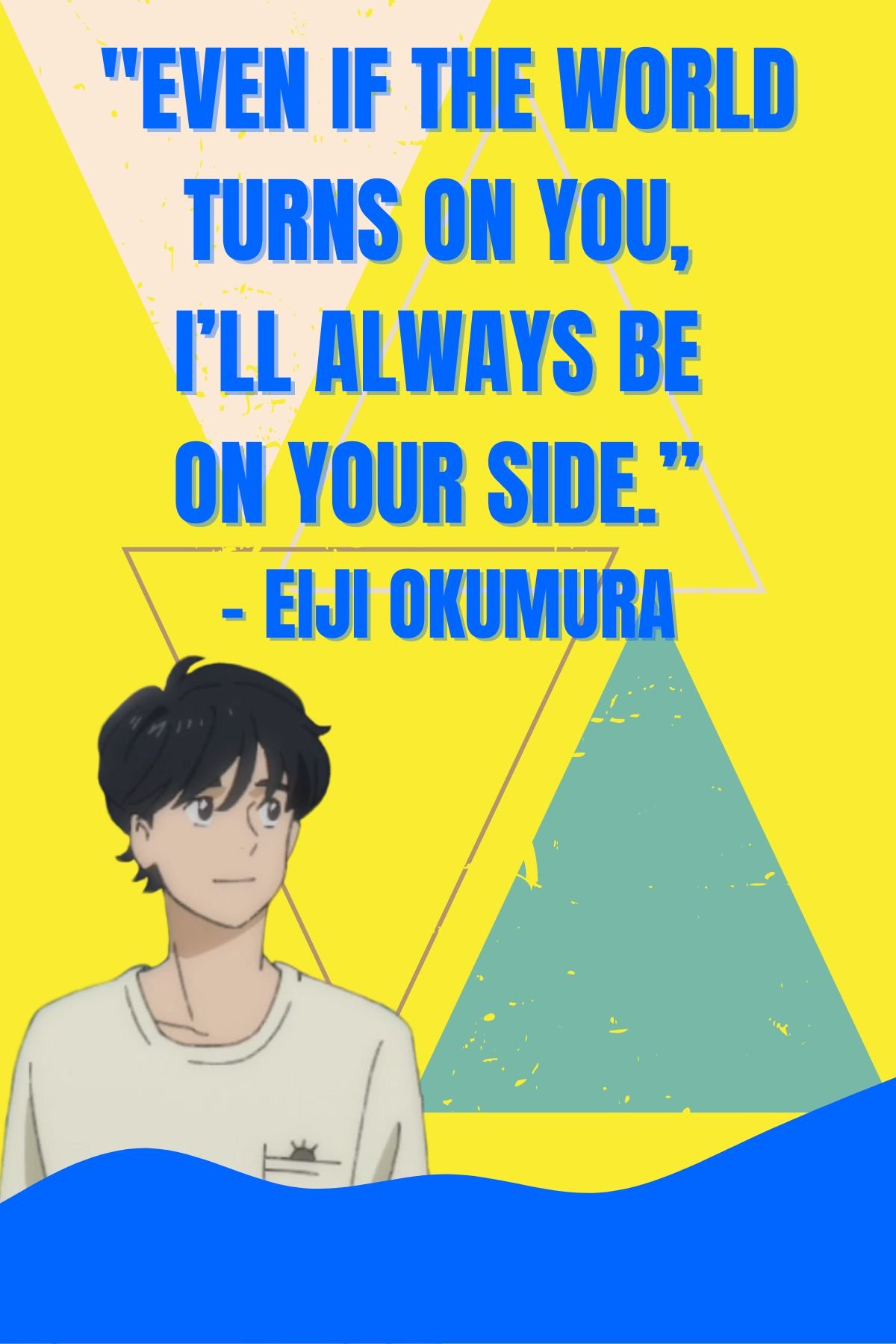 22. “What do you think I am? I’m a murderer, okay? I’m not the student body president or a summer camp counselor. I told you before. I kill people. This is my life! Those guys sold out their friends to save themselves. Anyone who does that once will do it again, and again, and again. They paid the price for their decisions, that’s all.” – Ash Lynx

23. Time is an ironic thing. For us, it means to age. But for boys like him, it means to grow.” – Sergei Varishikov

27. “Some people never change. Still getting champagne and caviar delivered to your door in the same apartment you rent as James Abbot. Still getting your kicks every Wednesday night. What was it you always said? ‘No such thing as a smart blond. They’re all dumb?’ And then your wife and son turned out to be blonds, that was pretty funny.” – Ash Lynx

28. “I wish I could hate you. I need someone to hate. My brother raised me. If it wasn’t for him, I would’ve starved to death. But when I found him in that filthy loony bin, he couldn’t even go to the bathroom by himself.” – Ash Lynx

30. “I wonder if I’m dying somewhere. I remember everything, but it’s peaceful. I see it again, but there isn’t any pain. Leave the weight of joy and sorrow alike down in that bed. That’s how death lifts away, doesn’t it?” – Ash Lynx 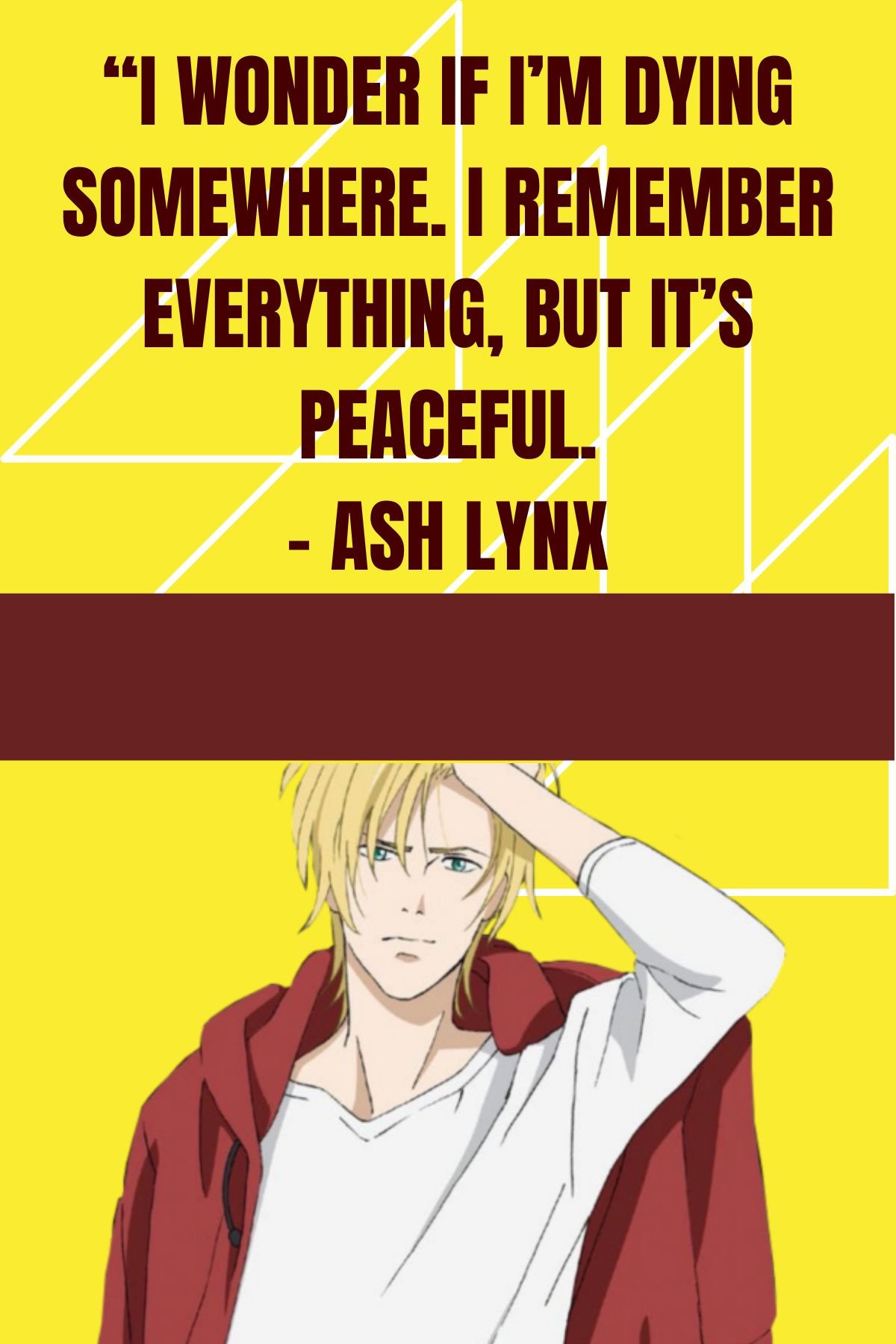 31. “If you feel responsible, the same goes for me.” – Eiji Okumura

32. “This little act of charity, you’re going to regret this, man, because I will kill you.” – Ash Lynx

33. “You want people to protect you, like with Ash, or make them want to tear you apart and crush you.” – Yut-Lung

34. “If we don’t fight back now, we’ll forever be expendable tools.” – Sing Soo-Ling

35. “I am very worried because I haven’t seen you, and I don’t know if you are okay.” – Eiji Okumura 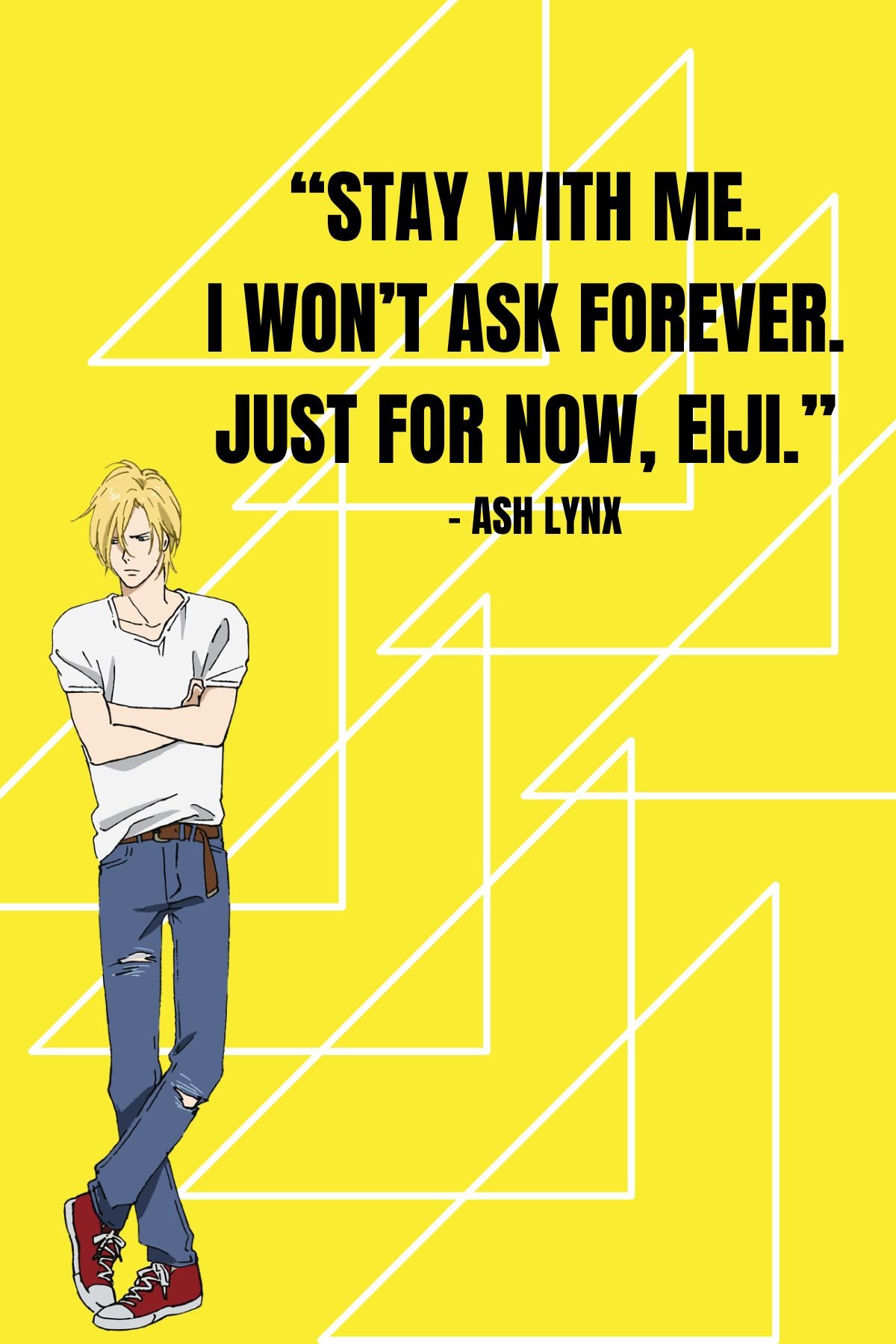 39. “Those pictures you said you took of Eiji, wish I could’ve seen them.” – Ash Lynx

41. “A bloody history is inevitable when you are the ruling clan.” – Yut-Lung

43. “Don’t apologize. That’s something for us Japanese to do.” – Eiji Okumura

47. Shorter Wong: “Once you hit rock bottom, there is nowhere to go but up.”
Ash Lynx: “You underestimate me. I have brought a pickaxe and I am ready to dig!”

49. “When I think of my own death, I try to picture that leopard’s carcass. Why did he come to those heights? For what? Did he lose his way chasing some prey and wander into some spot he couldn’t escape from? Or was he looking for something else, climbing higher and higher until he used up all his strength and collapsed? I think about which way the carcass was facing. Was he trying to get back down or trying to climb higher? Either way, that leopard knew that he would never be going back.” – Ash Lynx

50. “His face when he laughed was cute, and childlike, and totally angelic.” – Shorter Wong 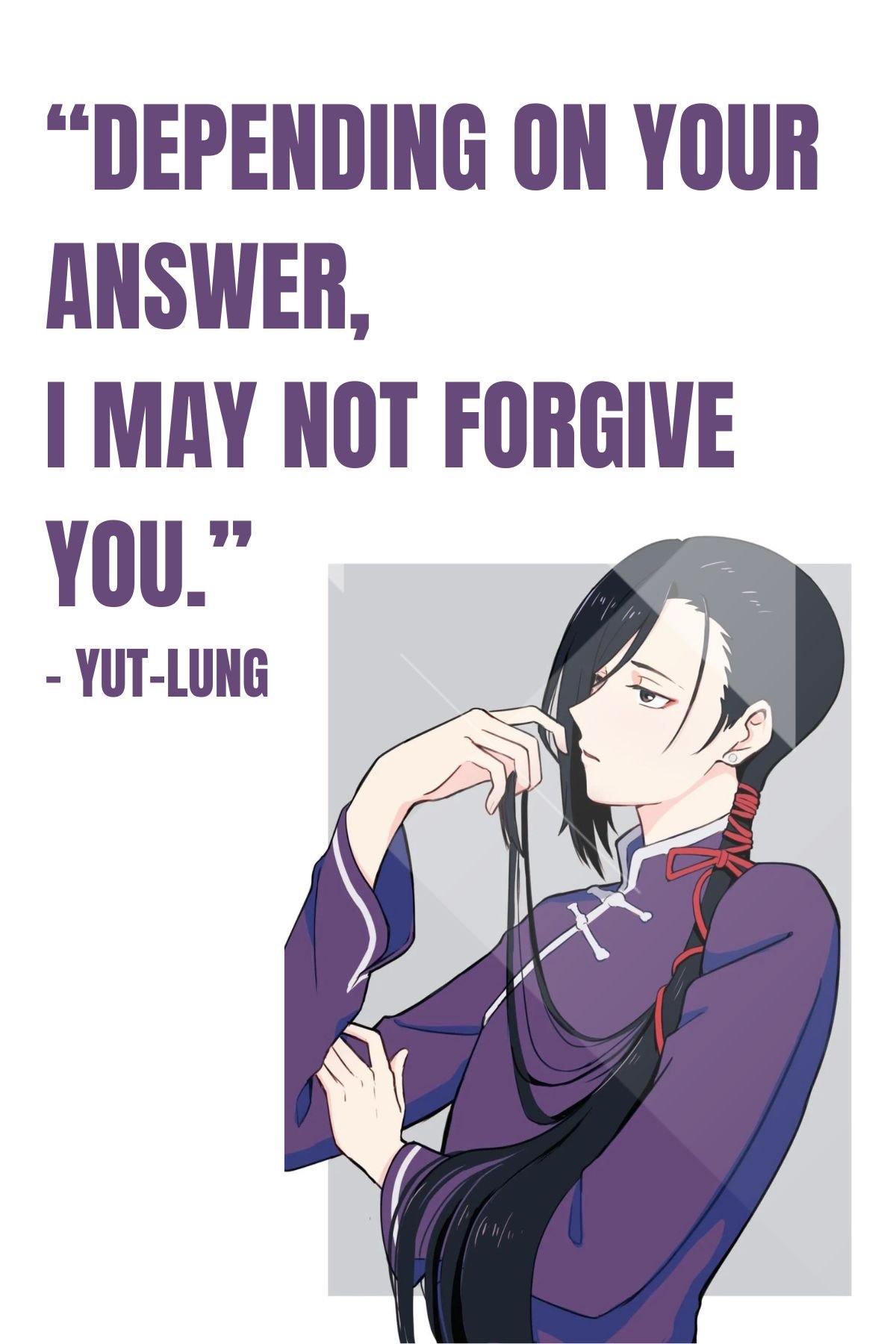 54. “I know there’s at least one person in this world who cares about me. Who doesn’t want anything from me? Do you have any idea what that’s like? I never did. Not once in my entire life until now, and that’s worth more to me than anything else.” – Ash Lynx

55. “Ready to lose your life over a pizza? Don’t be such a greedy bastard, Max. How about exercising a little caution?” – Ash Lynx

56. “What could be more relaxing than three days away from these guys?” – Ash Lynx

59. “What is this place? A massage parlor? I’m telling you. These nurses are all over me! I’m sick and tired of being fondled, okay? Just keep them away from me, please!” – Ash Lynx

62. “You pamper him too much. I don’t know what the problem is, but treating him like you’re giving the pope a bath isn’t going to help. That’s why he can’t even look after himself at his age.” – Ash Lynx

64. “Stick around for another drink, Cain. It’s almost curtain call, and I dropped that heap of crap excuse for a roll Dino tried to pawn off on me. Want a ride in my new Phantom V?” – Ash Lynx

65. “Even if I said no, you wouldn’t go back anyway. Plus, I guess it’s better for me that way too. If you went home, I’d probably worry if something happened to you. So it’s better you’re right here, where I can keep an eye on you.” – Ash Lynx

67. “My name has become the signal for a massacre. What on earth have I become?” – Ash Lynx

69. “Vulture got together with the viper. You make a great pair!” – Ash Lynx 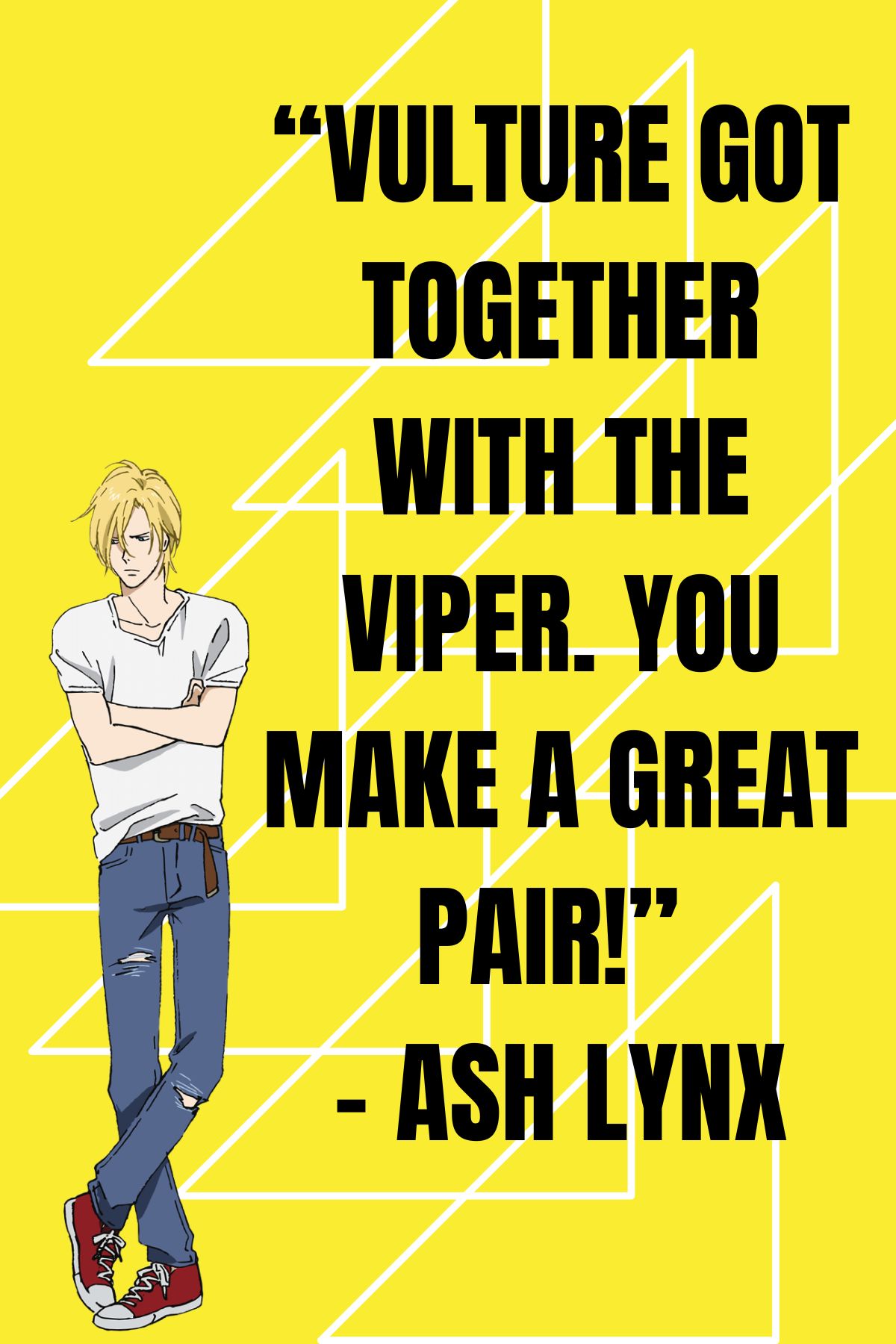 70. “Well, I already know you’re a sick man. Hope the plane doesn’t crash with you on board. It’ll go straight to hell. Not fair to the other passengers.” – Ash Lynx

72. “Watergate is history, Max. Don’t tell me you still believe the pen is mightier than the sword.” -Ash Lynx

73. Shorter: “What a beautiful day in New York it is today.”
Ash: “It truly is just the most beautiful day.”
Shorter: “Eiji sent you a good morning text didn’t he?”
Ash: “With a heart emoji!” 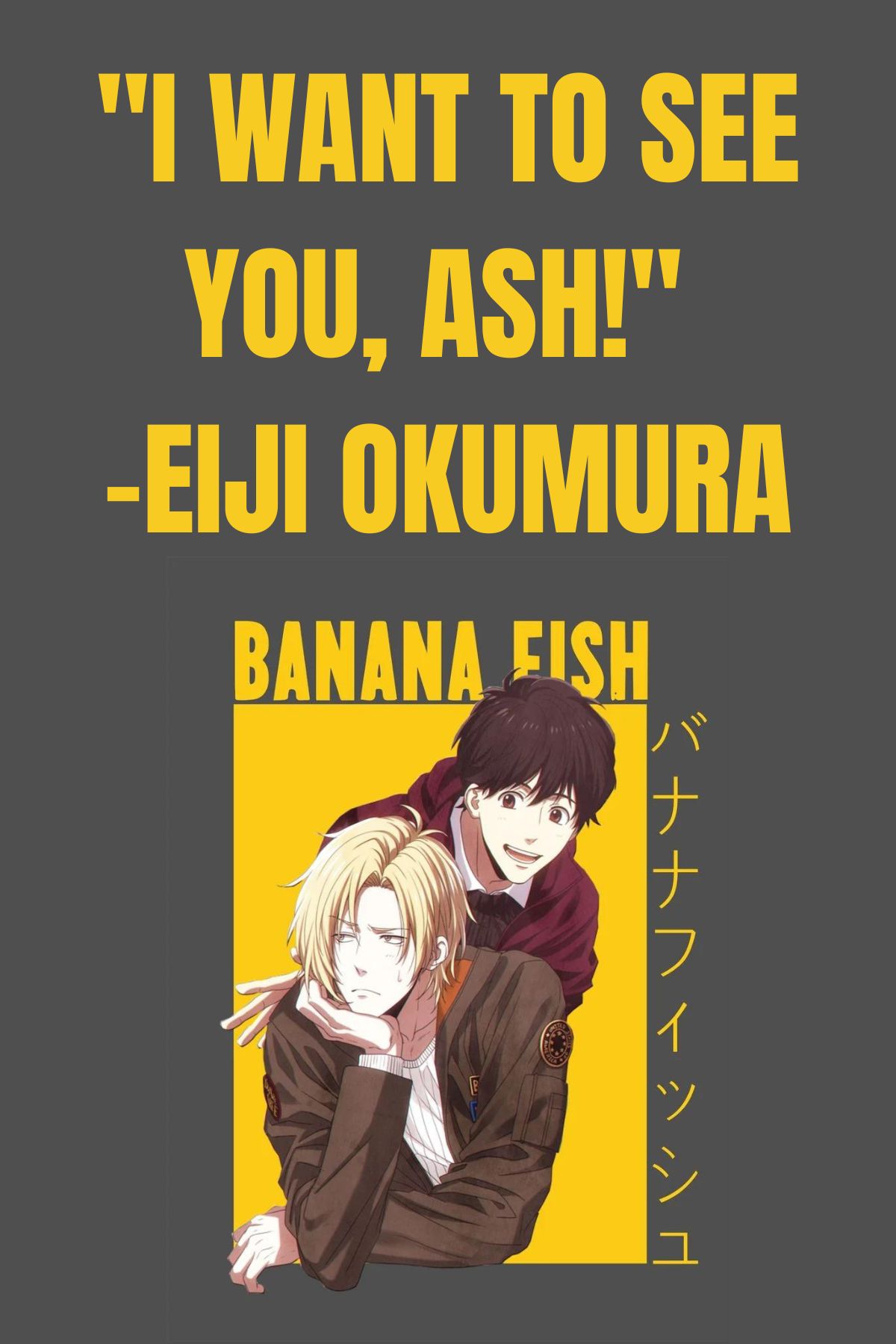 78. “I know you are much smarter than me, and bigger, and stronger – but even so, I always wanted to protect you. Funny, isn’t it? But what did I want to protect you from?” -Eiji Okumura