Inside: Potato quotes that celebrate food.

I can confidently say that potatoes are the best food. They are versatile, calorie dense, and so yummy. How could you not like them? Honestly, if you don’t like potatoes, I am not sure that I can trust you.

Potatoes have been around for hundreds of years. They are the staple of so many dishes, and of course, they are what FRENCH FRIES are made of. It really doesn’t get that much better than that. 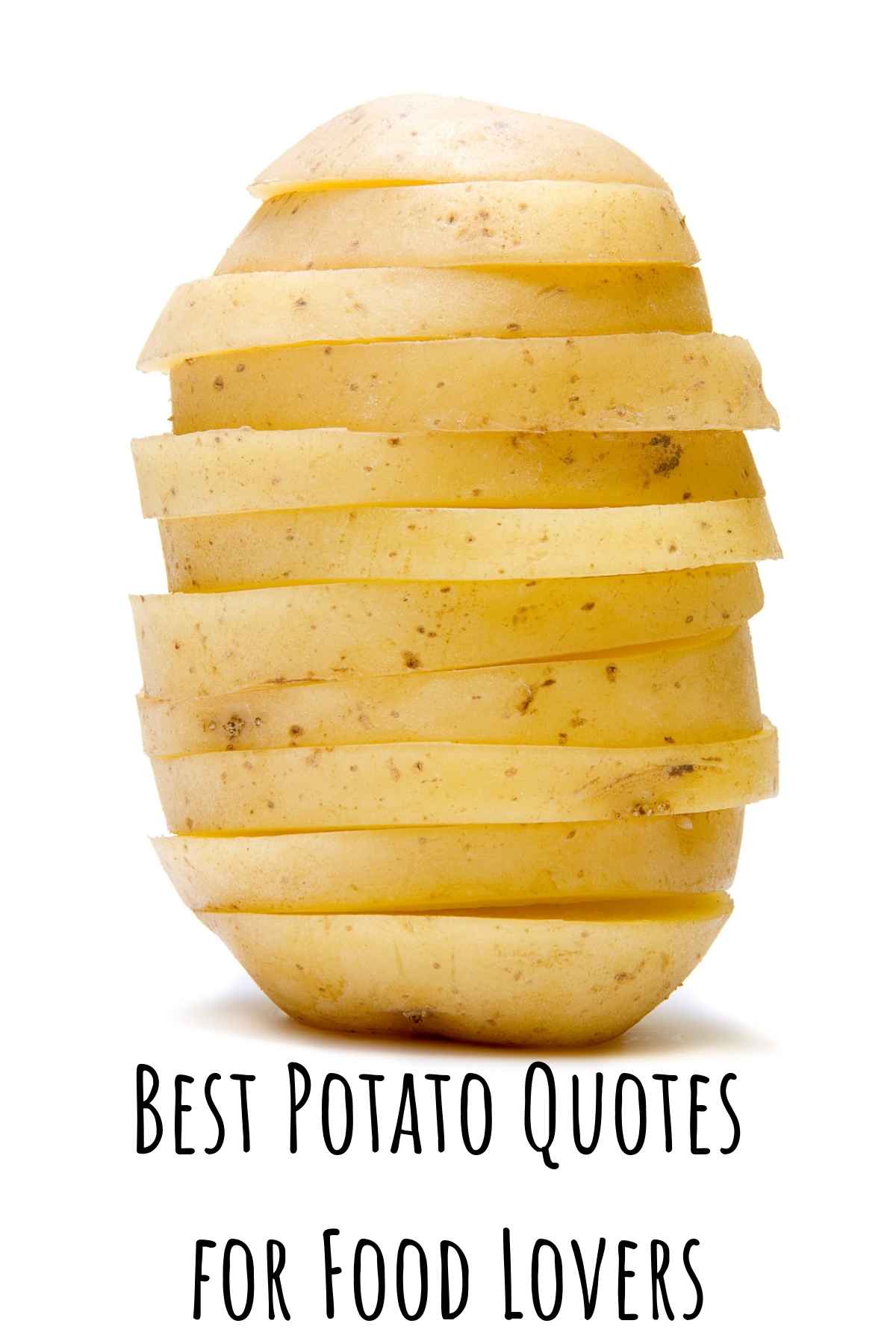 I am obviously not the only one who feels this way about this delicious root. There are so many people that share this passion that it should come as no surprise that there are many potato quotes out there.

I have compiled the best of the best, the cream of the crop, if you will, of them today for you. Try not to get hungry while reading these.

I thought we could start this out with some of my all-time favorite quotes. But don’t get it twisted; every single quote on this list is the best. This first list is full of MY personal favorites. But I have good taste, so enjoy!

1. “My idea of heaven is a great big baked potato and someone to share it with.”

2. “What I say is that if a man really likes potatoes, he must be a pretty decent sort of fellow.” – A.A Milne

3. “It is a mistake to think you can solve any problems just with potatoes.” – Douglas Adams

4. “To fulfill a dream, to be allowed to sweat over lonely labor, to be given a chance to create, is the meat and potatoes of life. The money is the gravy.”

5. “Zen does not confuse spirituality with thinking about god while one is peeling potatoes. Zen spirituality is just to peel the potatoes.” – Alan Watts

6. “I’m a loser on sunday. Yeah, I am a couch potato. I get up and try and eat and then back on the couch to watch anything.” – Adam Garcia

7. “Potatoes have skin, and I have skin. Therefore I must be a potato.”

8. “The moment when you realize all your friends are gorgeous and you are just a potato.”

9. I’ve pretty much been portrayed as every style thing you can be. After Wimbledon, you are Andy Everyman, who everybody is rooting for. I think the meat and potatoes of who I am haven’t been covered yet.” – Andy Roddick

10. “My parents mistook me for a sack of potatoes so I sat in the corner of the kitchen for the first 13 years of my life. My birth name is Thom Potatoes. ” – Thom York

11. “The worst thing about television is that everybody you see on television is doing something better than what you’re doing. You never see anybody on TV just sliding off the front of the sofa, with potato chip crumbs all over their shirt.” – Jerry Seinfeld 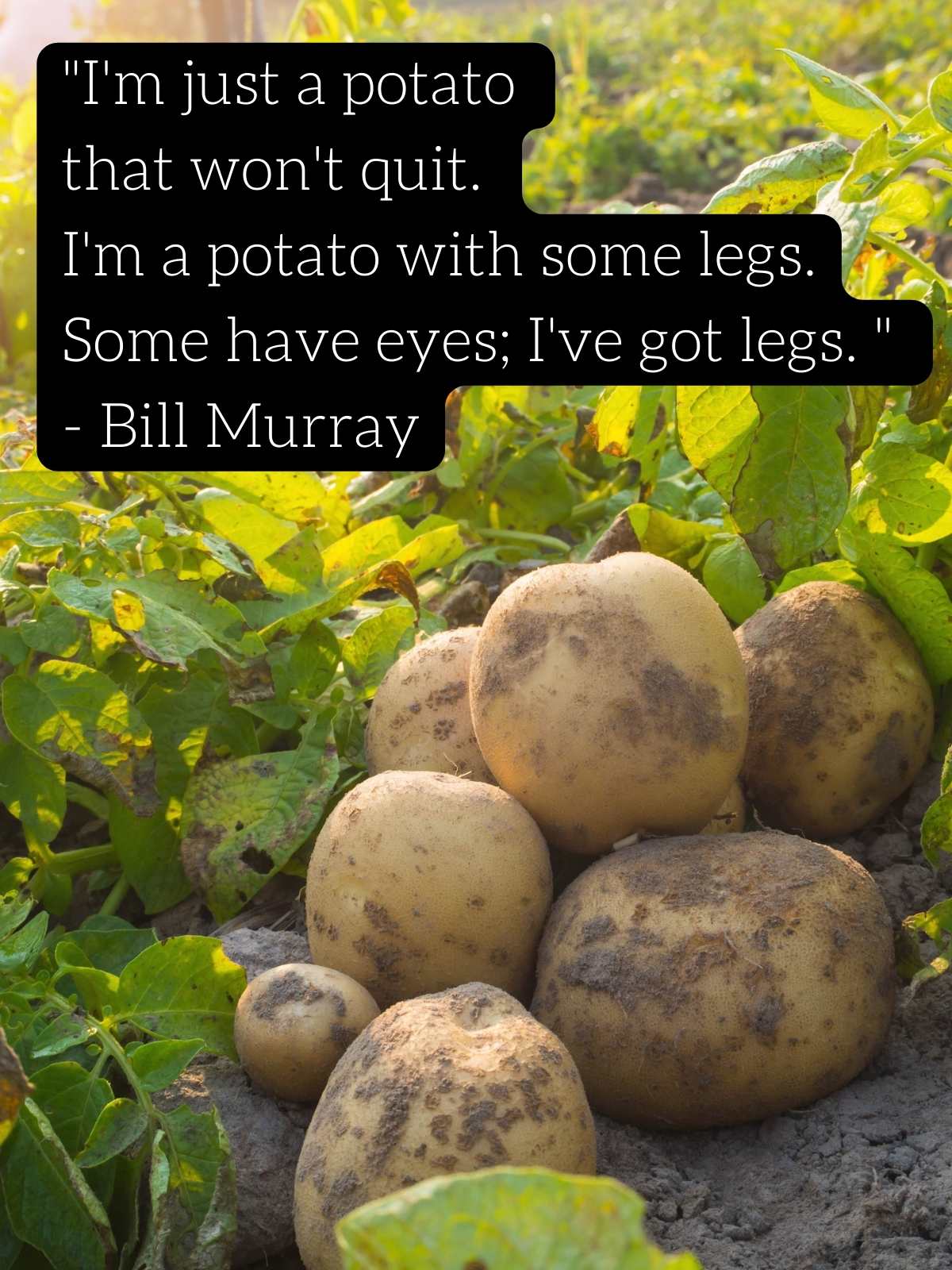 I thought since it is kind of a funny food, I should have a list of funny potato quotes to include along with the others. I hope that these make you laugh more than make you hungry. Because right now, my stomach is rumbling.

13. “I’d prefer not to be the pretty thing in a film. It’s such a bloody responsibility to look cute, because people know when you don’t and they’re like, They’re trying to pass her off as the cute girl and she’s looking like a bedraggled sack of potatoes.” – Minnie Driver

14. Can you suggest any suitable aspersions to spread abroad about Mrs. Thatcher? It is idle to suggest she has unnatural relations with Mrs. Barbara Castle; what is needed is something socially lower: that she eats asparagus with knife and fork, or serves instant mash potatoes.” – Sylvia Townsend Warner

15. “Comedy just pokes at problems, rarely confronts them squarely. Drama is like a plate of meat and potatoes; comedy is rather the dessert, a bit like meringue.” – Woody Allen

17. “Accounts of eating Christmas sweet potatoes baked in ashes and jackrabbit stewed with white flour dumplings are testaments to pioneer resilience and pleasure – and they help inspire my own best scratch cooking.” – Isabel Gillies

18. “If I had to pick another career, I’d be an optometrist for potatoes. That’s where the money is.” Peter Wisan

19. “My mum and my husband are from Irish backgrounds, so we have a lot of potatoes. Chips, mashed, boiled, new potatoes, I love them all. Even the slightly wonky ones like Duchess potatoes that go up in a little spiral.” Jo Brand

20. “Money is the root of all evil, and yet it is such a useful root that we cannot get on without it any more than we can without potatoes.” – Louisa May Alcott

21. “I honestly cannot imagine a better food. Potatoes are it for me.” 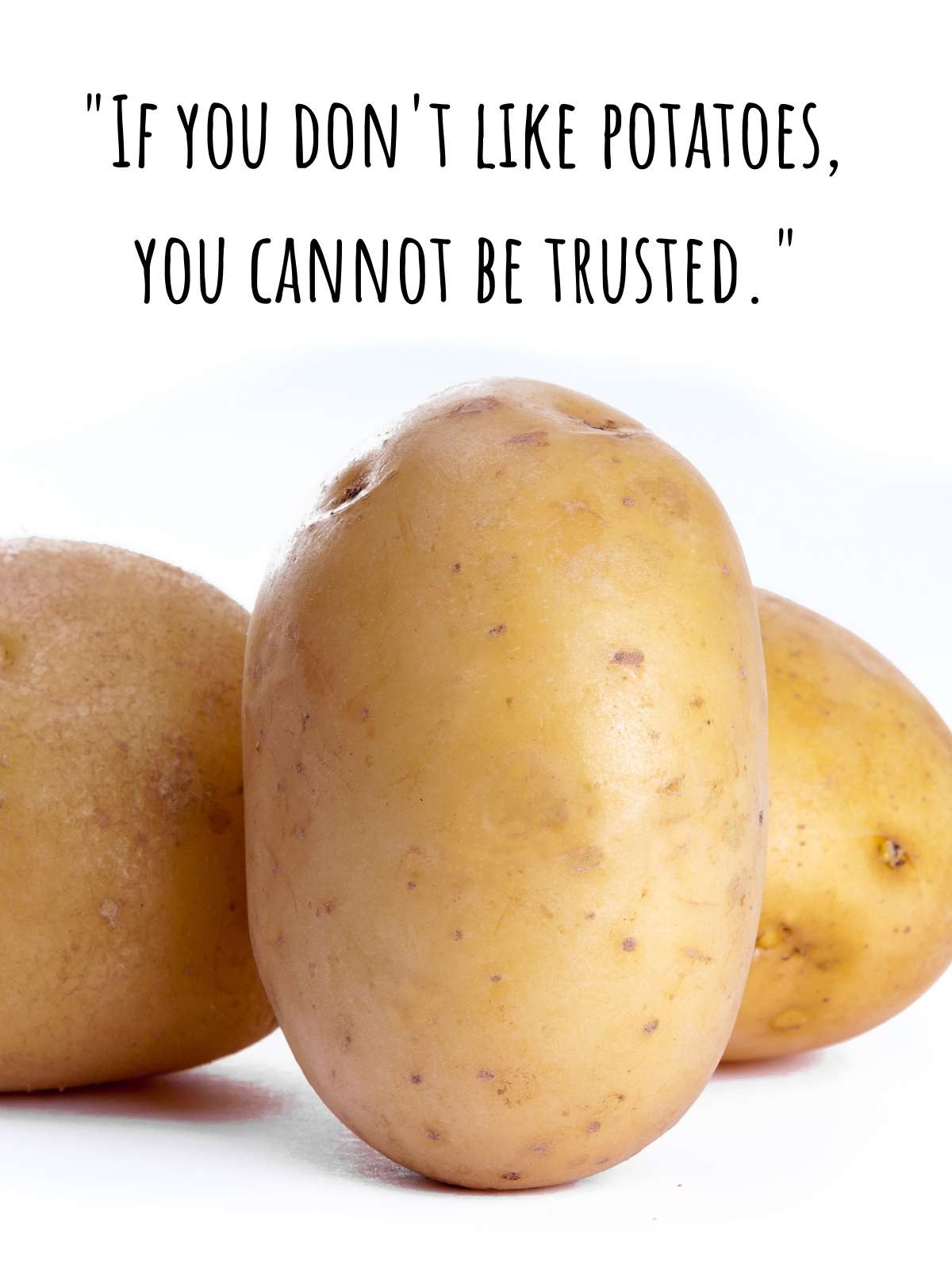 And lastly, I thought I would add a list written by people like you and me, food lovers who like to show it! I love each and every one of these quotes because it gives you a glimpse into the lives that this root has touched. It may seem funny, but food connects us all.

23. “One of my favorite childhood memories was on a cold winter day. My mom surprised us all with our out-baked potatoes, loaded with cheese and bacon. I know this sounds like a silly thing to be excited about, but we kids never got our own baked potato. It just felt like such a grown-up thing; I will always remember it.”

24. “I root around my fridge for something to eat, but I come out with nothing. I wanted a comfortable snack, something to warm me from the inside and excite my brain. Then I remembered I had potatoes.”

25. “I never understood the versatility of the potato until they were all we had to eat, and yet each night it felt like we were eating something new.”

28. “Since when do potatoes need to prove themself? They have already done so much for the world already.”

29. “I strongly believe that someone can fall in love by tasting one bite of my homemade mashed potatoes.”

30. “Potatoes are the yummiest food on this planet.”

33. “No food in the world will ever compare when a potato is in the mix.” 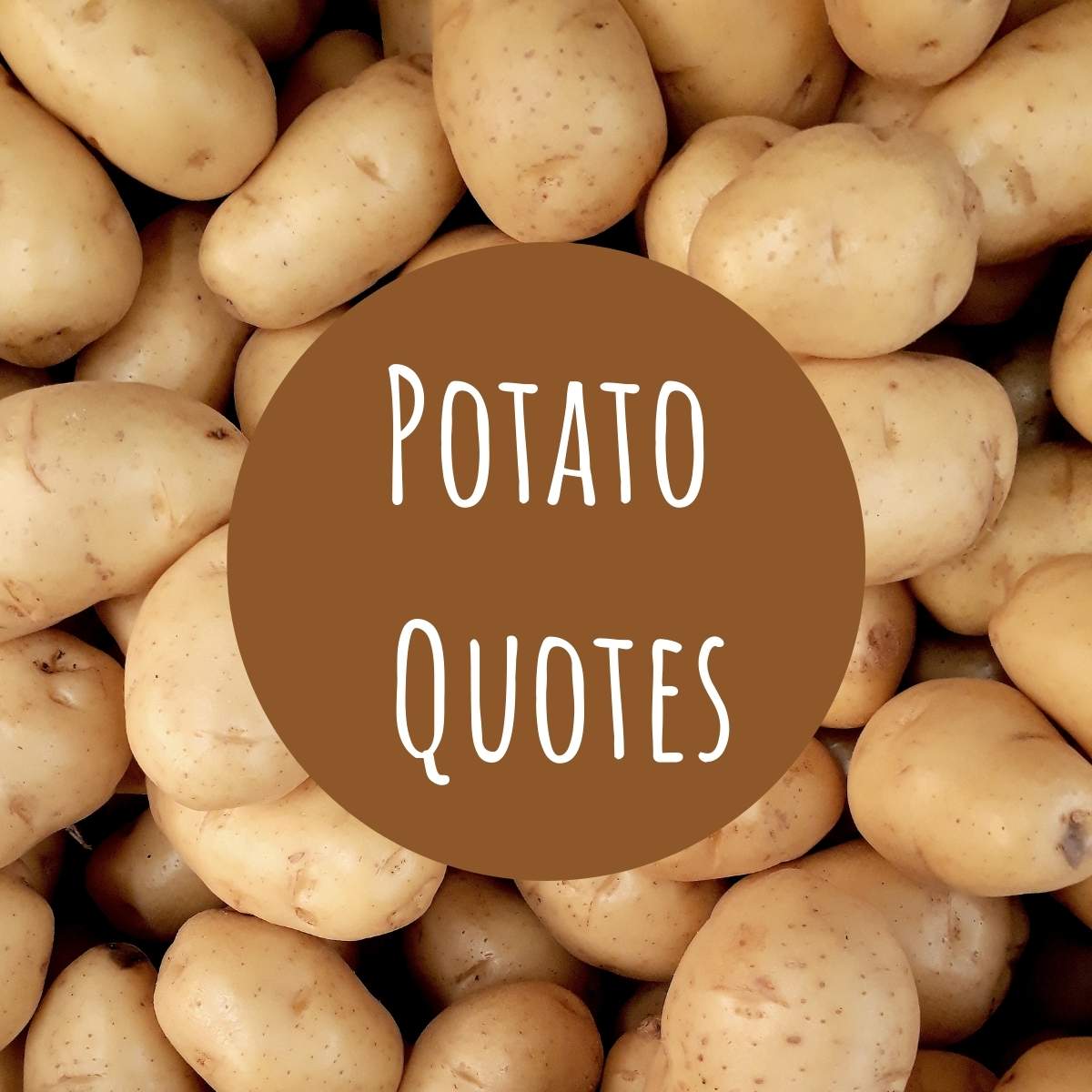 Before this article, I bet you have never seen so many potato lovers together in one place. And even though these people weren’t actually together, their words were, and that is cool enough.

It’s so interesting to see how much food shapes people’s lives. Everyone has a story about food, one that makes them feel at home or one that reminds them of being a kid again; it’s extremely powerful stuff. I hope you enjoyed these potato quotes as much as I enjoyed finding them.

If you want to see how much power WORDS can have, then you should check out some of your other quotes. You are going to love these!