Inside: Leopard quotes and print phrases that are powerful enough to roar about.

Throughout history, leopards have served as inspiration for artists, poets, writers and storytellers. They are solitary animals, secretive and hard to spot. They are extremely strong, fast and intelligent. They are often used as sports teams’ mascots, especially football and soccer teams.

But the most unique thing about them is their spots, actually called rosettes. Their rosettes create intricate patterns against their light fur. There are even black panthers. They also have rosettes but theirs are harder to see.

These leopard quotes and rosette print phrases are sure to inspire all of those who love these graceful and powerful big cats.

2. A leopard does not change his spots, or change his feeling that spots are rather a credit.” – Ivy Compton-Burnett

3. “A world without leopards, well, who would want to live in it?” – Diana Vreeland

4. “Spots can be any shape that you want, but a leopard will still have spots regardless of shape.” –Anthony T. Hincks

5. “Life is like the leopard’s den, and once you find you’ve fallen in, a safari of the heart surely comes to an end.” – Burleigh Drummond

6. . “Yet technique matters, even so. God uses it, for a buffalo is not a leopard.” – James Dickey

8. “Be motivated like the falcon, hunt gloriously. Be magnificent as the leopard, fight to win. Spend less time with nightingales and peacocks—one is all talk, the other only color.” – Rumi

10. “Those who have never seen a leopard under favourable conditions in his natural surroundings can have no conception of the grace of movement, and beauty of colouring, of this the most gracefuL and the most beautiful of all animales in our Indian jungles.” -Jim Corbett 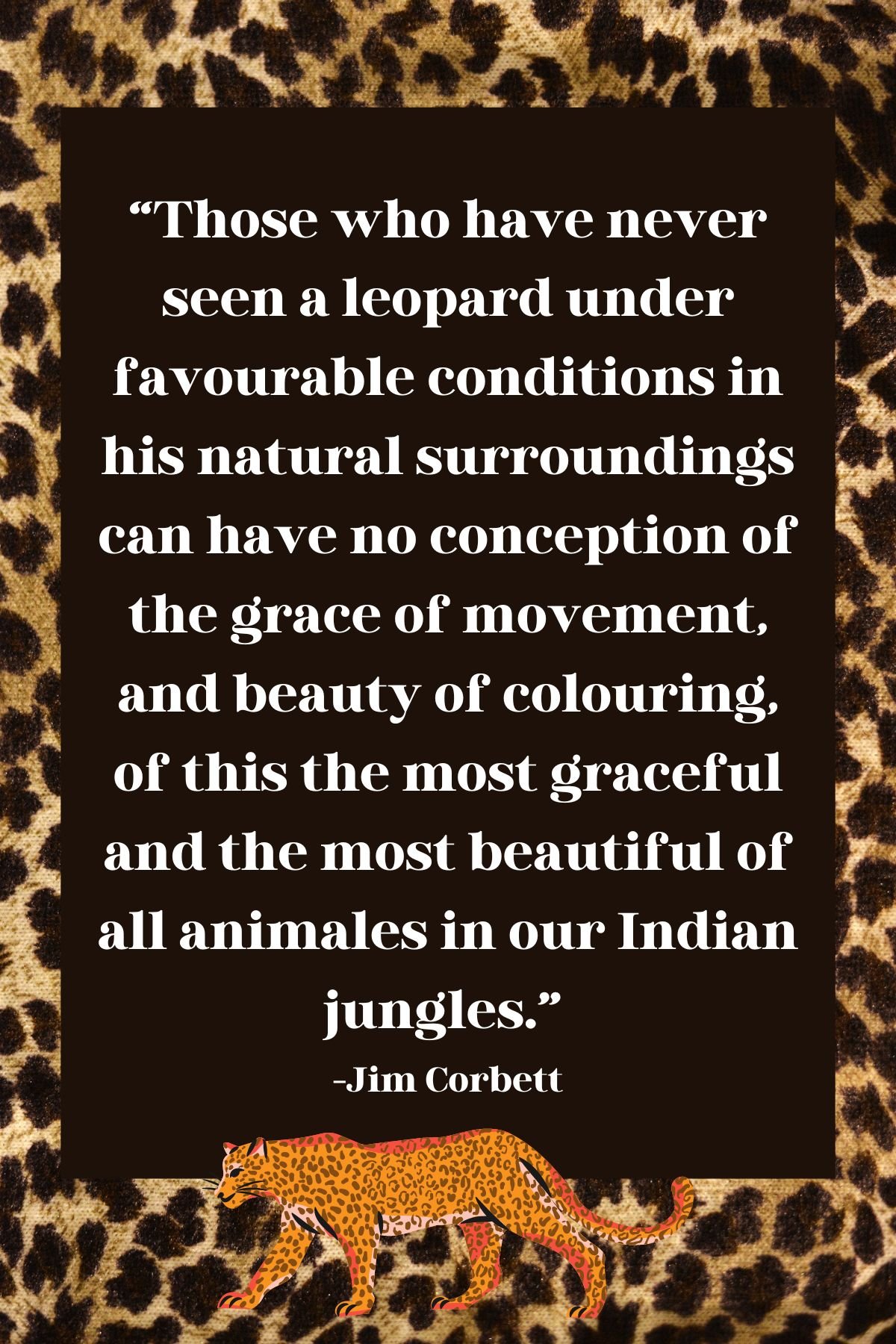 11. “I went to South Africa on safari and came eye to eye with a beautiful leopard. We were so close; I was staring at him for a long time and I felt a recognition of my own nature.” – Bail LingWe only asked for leopards to guard our thinning dreams.” -Charles Bukowski

12. “He is wounded, but he is still the leopard—still dangerous. His eyes look through you, until they don’t. That’s when he’ll kill you.” – M.C. Scott

13. “Long ago, our ancestors sacrificed their children to the leopards. The souls of the children grew inside the leopards, until the leopards became human. We were Gods then.” – DeWitt Bodeen

14. “I caught the smell of a warm woman and I saw the eyes of an insomniac leopard in the darkness.” – Gabriel Garcia Marquez

15. “Leopard prints lever lose their spots or station in fashion.”-Iman

16. “The African leopard is an audacious animal, although it is ungrateful of me to say a word against him, after the way he has let me off personally. Taken as a whole, he is the most lovely animal I have ever seen; only seeing him, in the one way you can gain a full idea of his beauty, namely in his native forest, is not an unmixed joy to a person, like myself, of a nervous disposition.” –Mary Kingsley

17. “What a squirrel goes through
for that one special acorn
is truly of imagination born.
To cross the leopard’s back
as he sleeps, for one delicious
treat’s… yeah, it’s worth it.” -Unknown

18. “The Lord is a shoving leopard.” – William Archibald Spooner

20. “Here is this vast, savage, howling mother of ours—nature—lying all around, with such beauty, and such affection for her children, as the leopard; and yet we are so early weaned from her breast to society, to that culture which is exclusively an interaction of man on man.” – Henry David Thoreau

21. “I started to turn my life around for the better and try to instil a bit of stability and balance back into it, and take a back seat to violence. I wanted to leave that part of my life behind. The leopard wanted to ditch its spots!” – Stephen Richards

22. “Life is like the leopard’s den, and once you find you’ve fallen in, a safari of the heart surely comes to an end.” – Burleigh Drummond

23. “I hate to tell you this, but I think your leopard just ate a goddess.” – Rick Riordan

24. “The autumn always gets me badly, as it breaks into colours. I want to go south, where there is no autumn, where the cold doesn’t crouch over one like a snow-leopard waiting to pounce.” – D. H. Lawrence

25. “In the third month, the sun is rising, the noar and the leopard on the field of Mars to fight; the tired leopard raises its eye to the heavens, sees an eagle playing around the sun.” – Nostradamus

26. “You’re like this leopard who’s pretending to be a house cat.” – Holly Black 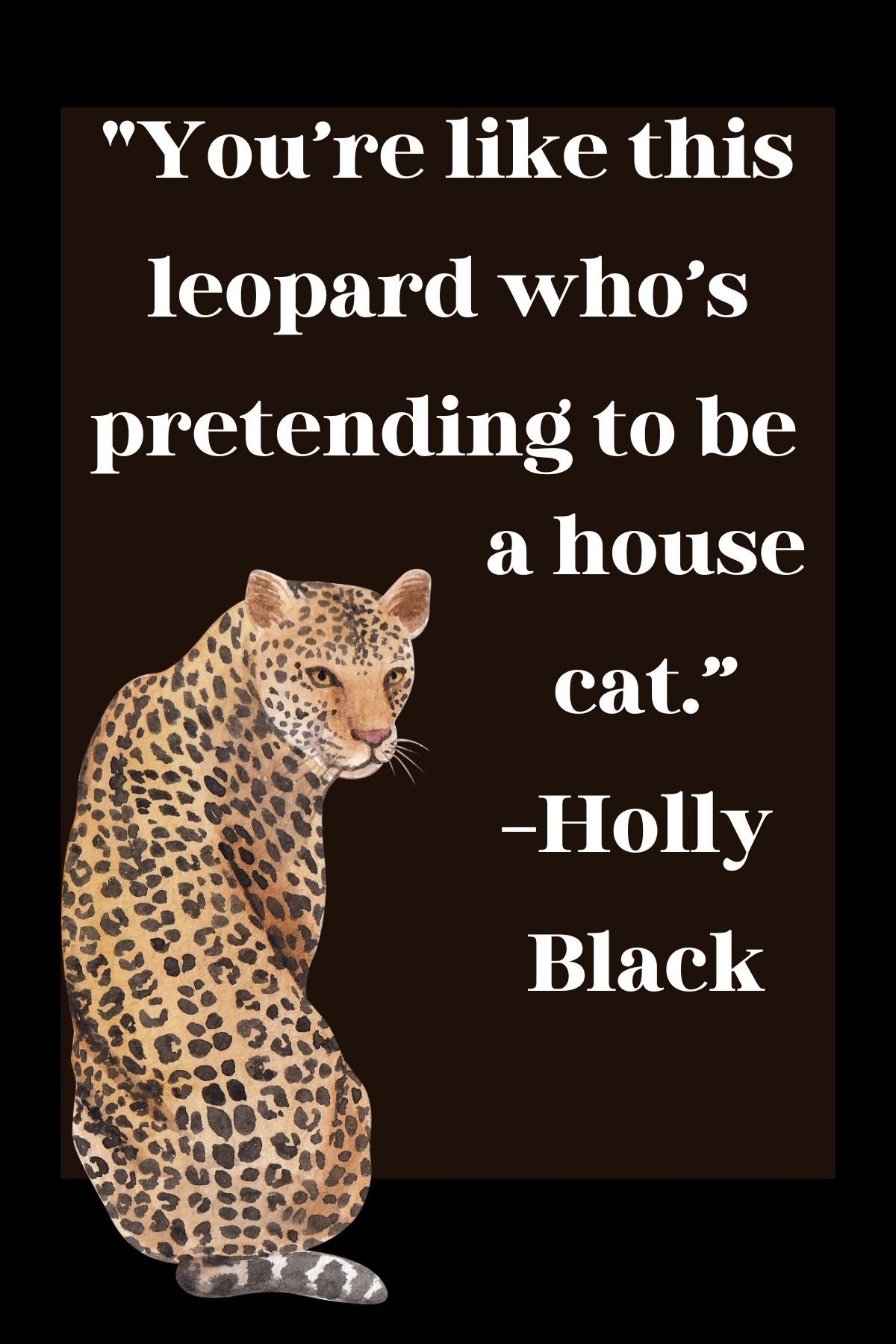 27. “One day, a leopard stalked into the synagogue, roaring and lashing its tail. Three weeks later, it had become part of the liturgy.” – Franz Kafka

28. “At the top of the mountain, we are all snow leopards.” – Hunter S. Thompson

29. “The leopard is a cruel lover. His tenderness breaks the gazelle’s heart.” – Aleksandr Voinov

31. Have the will of a tiger, the strength of a leopard, and the heart of a lion. 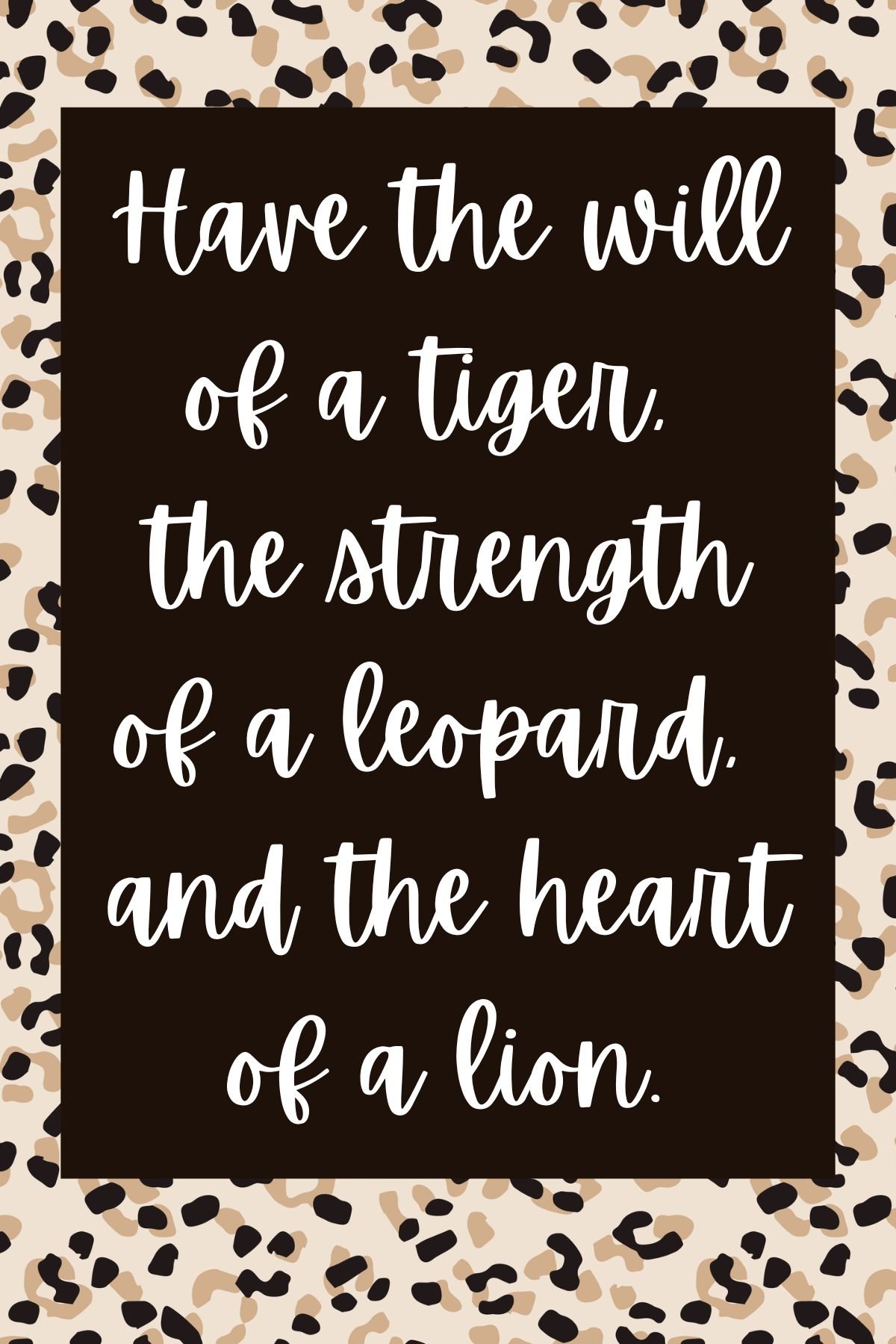 34. “My weakness is wearing too much leopard print.” – Jackie Collins

36. Trust a leopard when it shows you its spots.

37. Just a girl who loves leopards.

39. Leopards are my spirit animal!

40. “I thought I spotted a leopard once, but it turns out they’re born like that.” -Unknown

41. “Why can you always trust a leopard? Because it’s not a cheetah!” -Unknown

42. “Sometimes, a leopard can change its spots if the right woman comes along.” – Carolyn Brown

43. “This leopard uses its spots to help it hide in the bush.” – Janis Diamond

44. “What does the leopard teach us? Not to be intimidated by animals that outweigh him—to be fearless and daring.” –J.D. Jacobs 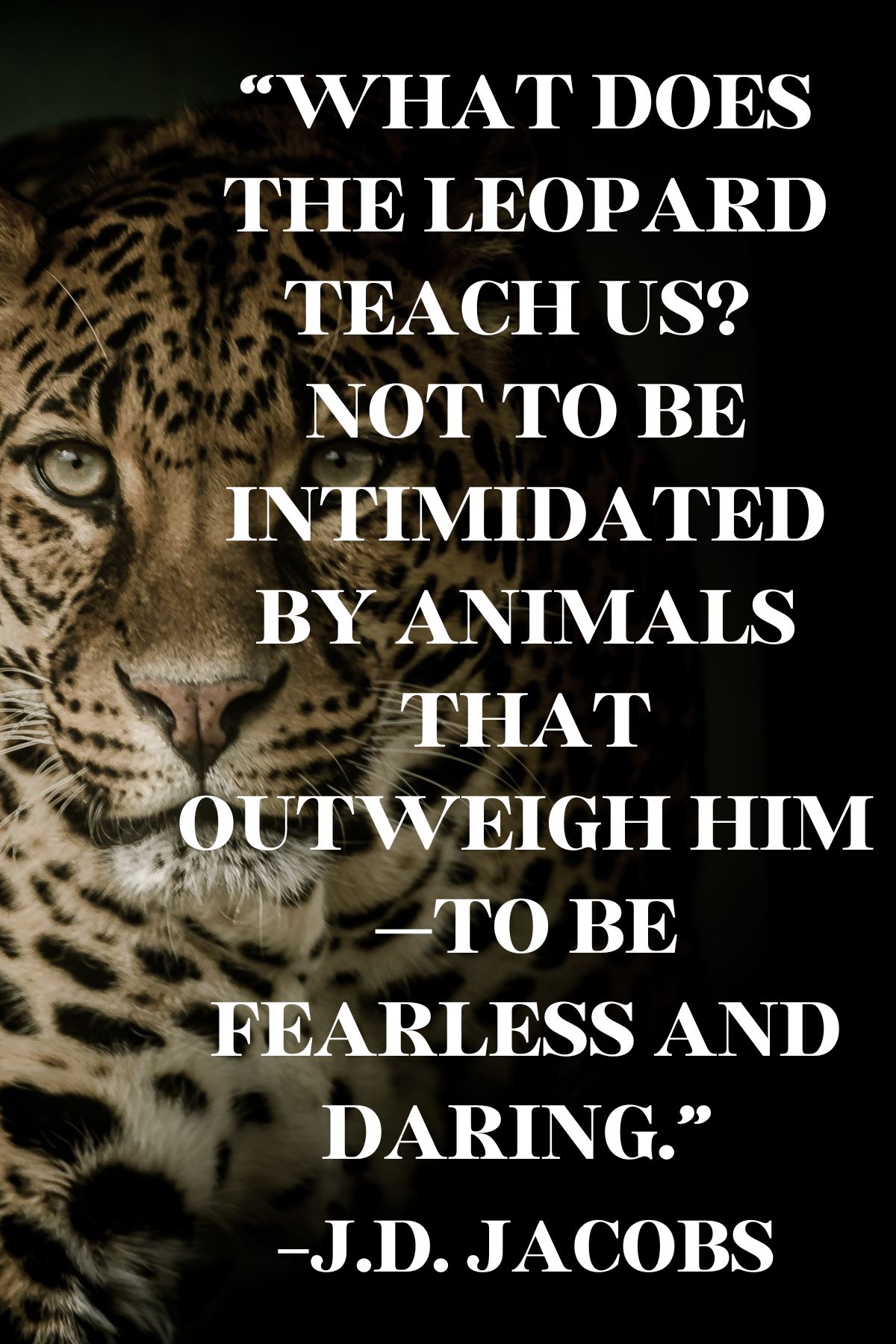 45. “The only way a no-legged leopard could hurt you is if it fell out of a tree onto your head.” – Ellen DeGeneres

46. “I don’t have to be logical. I’m a leopard. We’re considered wild animals, you know.” – Amy Neftzger

47. “The pale stars are gone! For the sun, their swift shepherd, to their folds compelling them; in the depths of the dawn, hastes, in a meteor-eclipsing array, and flees beyond his blue dwelling, as fawns flee the leopard.” – Percy Bysshe Shelley

48. “No blind spots in the leopard’s eyes can only help to jeopardize the lives of lambs, the shepherd cries.” – Collin John Newman

49. “A leopard doesn’t change his spots just because you bring him in from the jungle and try to housebreak him and turn him into a pet. He may learn to sheathe his claws in order to beg a few scraps off the dinner table, and you may teach him to be a beast of burden, but it doesn’t pay to forget that he’ll always be what he was born—a wild animal.” – George Rockwell

50. “Oh a leopard can’t change his spots, and oil and water can’t mix. But I have recently heard, an old dog learned new tricks.” – John Rox

51. “At that moment, she saw not the man but the leopard within. And she realized the truth far too late—he wasn’t human.” –Nalini Singh

52. “Now that I come to think of it, you can’t really get a leopard to appreciate the notion that it has spots. You can explain it carefully to the leopard, but it will just sit there looking at you, knowing that you are made of meat. After a while it will perhaps kill you.” – Geoffrey K. Pullum

53. “Leopard print has been my thing forever! When I was a teenager, my entire room was done in leopard print—it’s timeless, chic, and always in style. When in doubt, leopard!” – Khloe Kardashian

54. “Leopard is an animal design, and my designs come from nature.” – Roberto Cavalli

56. “In a Leopard, the spots are not observed.” – George Herbert

57. “The goal is to live with God-like composure on the full rush of energy, like Dionysus riding the leopard, without being torn to pieces.” – Joseph Campbell

Can A Leopard Change Its Spots

58. “You can’t just sit around in leopard-print slippers and drink champagne all day and think everything’s gonna work out somehow.” – Michael Schur

59. “A leopard doesn’t change its spots, mark the one willing to explore, a chance to see so much more, a tug at the heart will light the spark.” – Mario William Vitale 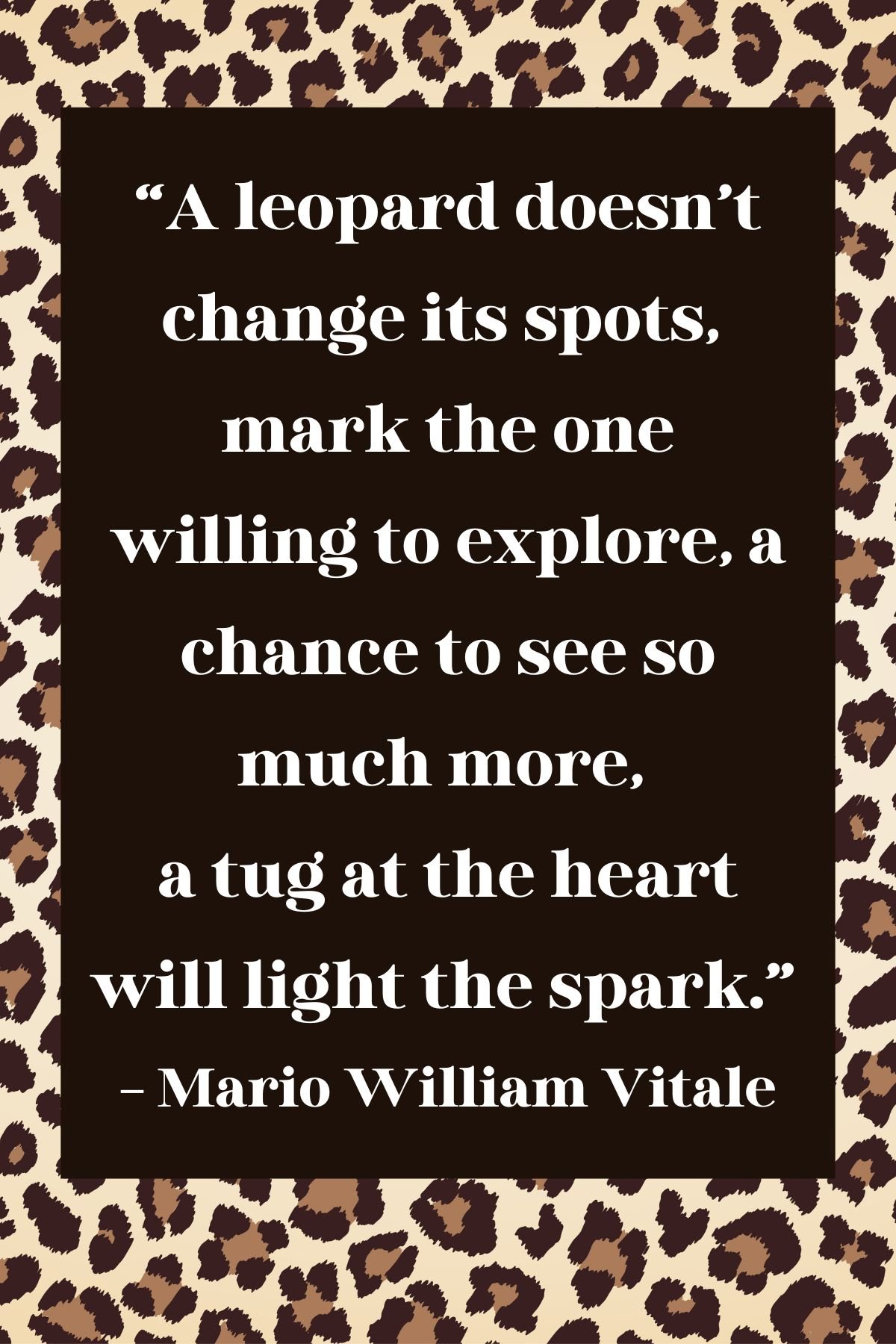 60. “The appeal of the cat lies in the very fact that she has formed no close bond with man—that she has the uncompromising independence of a tiger or a leopard while she is hunting in his stables and barns.” – Konrad Lorenz

61. “Some kinds of animals burrow in the ground; others do not. Some animals are nocturnal, as the owl and the bat; others use the hours of daylight. There are tame animals and wild animals. Man and the mule are always tame; the leopard and the wolf are invariably wild, and others, as the elephant, are easily tamed.” – Aristotle

62. “There are going to be animals in Heaven. The prophet Isaiah said that the wolf shall dwell with the lamb, and the leopard shall lie down with the young goat, and the lion shall eat straw like the ox.” –David Bergh

63. “What a luxury a cat is—the moments of shocking and startling pleasure in a day, the feel of the beast, the soft sleekness under your palm, the warmth when you wake on a cold night, the grace and charm even in a quite ordinary workaday puss. Cat walks across your room, and in that lonely stalk you see leopard or even panther, or it turns its head to acknowledge you and the yellow blaze of those eyes tells you what an exotic visitor you have here, in this household friend, the cat who purrs as you stroke, or rub his chin, or scratch his head.” – Doris Lessing

64. “We have a lion, tiger, liger—the father is a lion and the mother is a tiger—black and spotted leopard, mountain lion, Asian leopard cats. We’ve got a tremendous number of the exotic felines.” – Tippi Hedren

65. “We were the leopards, the lions; those who’ll take our place will be little jackals, hyenas; and the whole lot of us, leopards, jackals, and sheep, we’ll all go on thinking ourselves the salt of the earth.” – Giuseppe Tomasi di Lampedusa

66. “Mother Nature is always speaking. She speaks in a language understood within the peaceful mind of the sincere observer. Leopards, cobras, monkeys, rivers and trees; they all served as my teachers when I lived as a wanderer in the Himalayan foothills.” – Radhanath Swami

67. “His lithe and lethal grace is hypnotic, too, in the way he moves like a leopard in the African grass, even if it’s just striding down a sidewalk. I got sucked into all this, but I can’t afford to let it.” – Jasinda Wilder

68. “But I was just really blown away that you could just buy a snow leopard. For me, it was like buying a panda bear or a Komodo dragon.” – Eric Goode

71. “Leopard coats are fantastic. But on the leopard.” -Amanda Blake

72. “The leopard lived in every aspect of him—from his strength, to his anger, to his rage.” – Powerful leopard quote by Nalini Singh 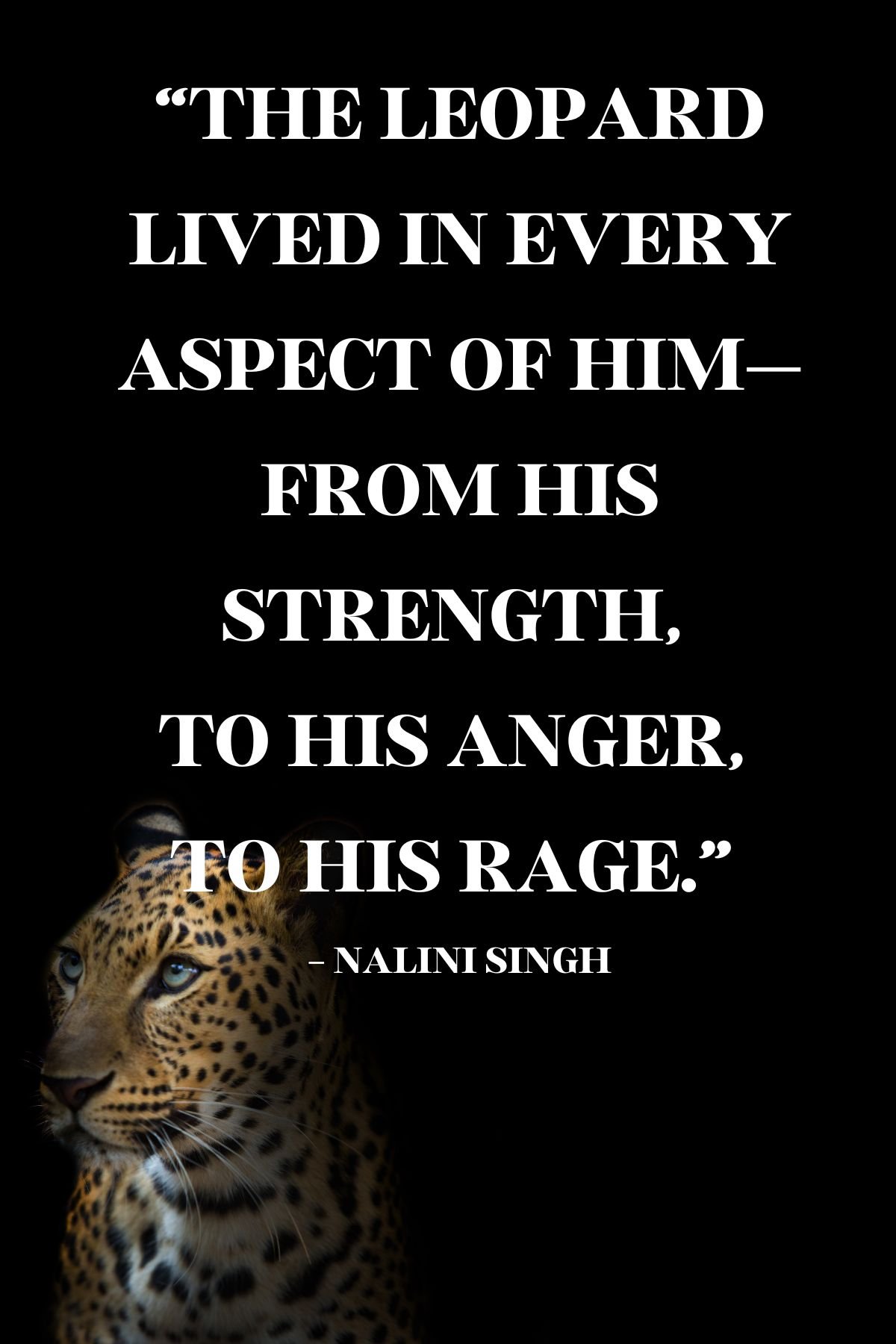 73. “My mother was very good at encouraging me to dress however I wanted to dress. My sisters would sometimes think, ‘Oh my God, you let her buy that fuzzy leopard coat at that vintage store?’ I thought, of course, I looked like Audrey Hepburn.” -Kate Spade

76. “The skin of the leopard is beautiful, but not his heart.” -African Proverb