Inside: Powerful Dolphin Quotes & Captions to Make You Smile.

It’s hard not to love dolphins. Their wide mouths make it look like they’re grinning, and their smiles are so infectious.

They’re also graceful and flip around in the air like acrobats. It’s so exciting to see them when you’re at the beach, and it fills hearts with joy.

Dolphins are extremely intelligent and loyal, protecting their pod from predators. There are even stories of them protecting humans from sharks.

These 85 Powerful Dolphin Quotes are sure to lighten your mood and make you smile when you need It. 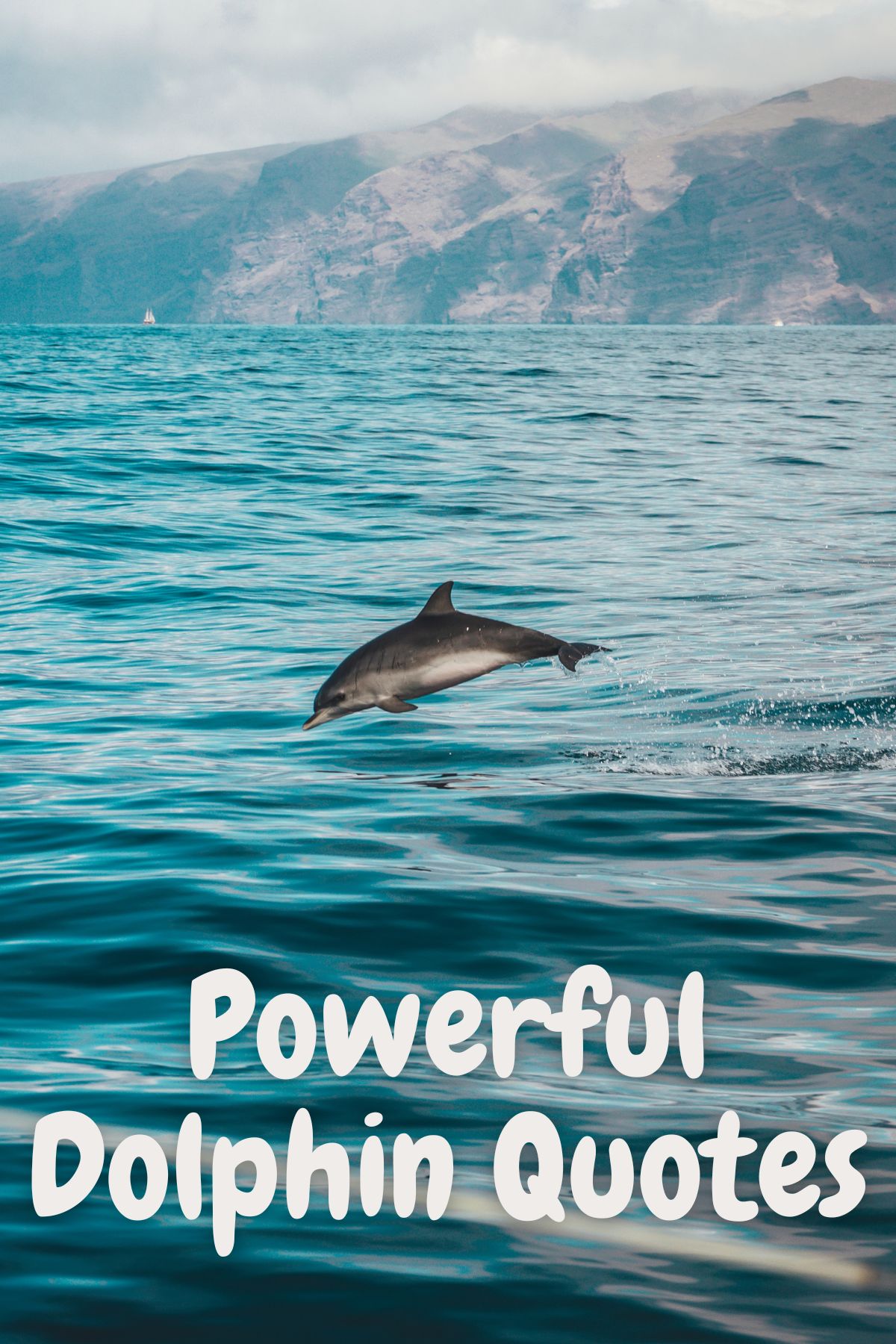 1.”I felt such a deep connection with dolphins. I felt like they were the only ones who understood me.” -Lykke Li

2. “Among the sea-fishes many stories are told about the dolphin, indicative of his gentle and kindly nature… It appears to be the fleetest of all animals, marine and terrestrial, and it can leap over the masts of large vessels.” -Aristotle

3. “There’s no question dolphins are smarter than humans as they play more.” -Albert Einstein

4. “Imagine a dolphin dancing in the sky. Let it dance with joy. Think of yourself at the bottom of the ocean watching.” -Yoko Ono

5. “The dolphins and whales have a brain that is actually bigger in proportion to their size than we do. They are very complex. They are thinkers.” -Owsley Stanley 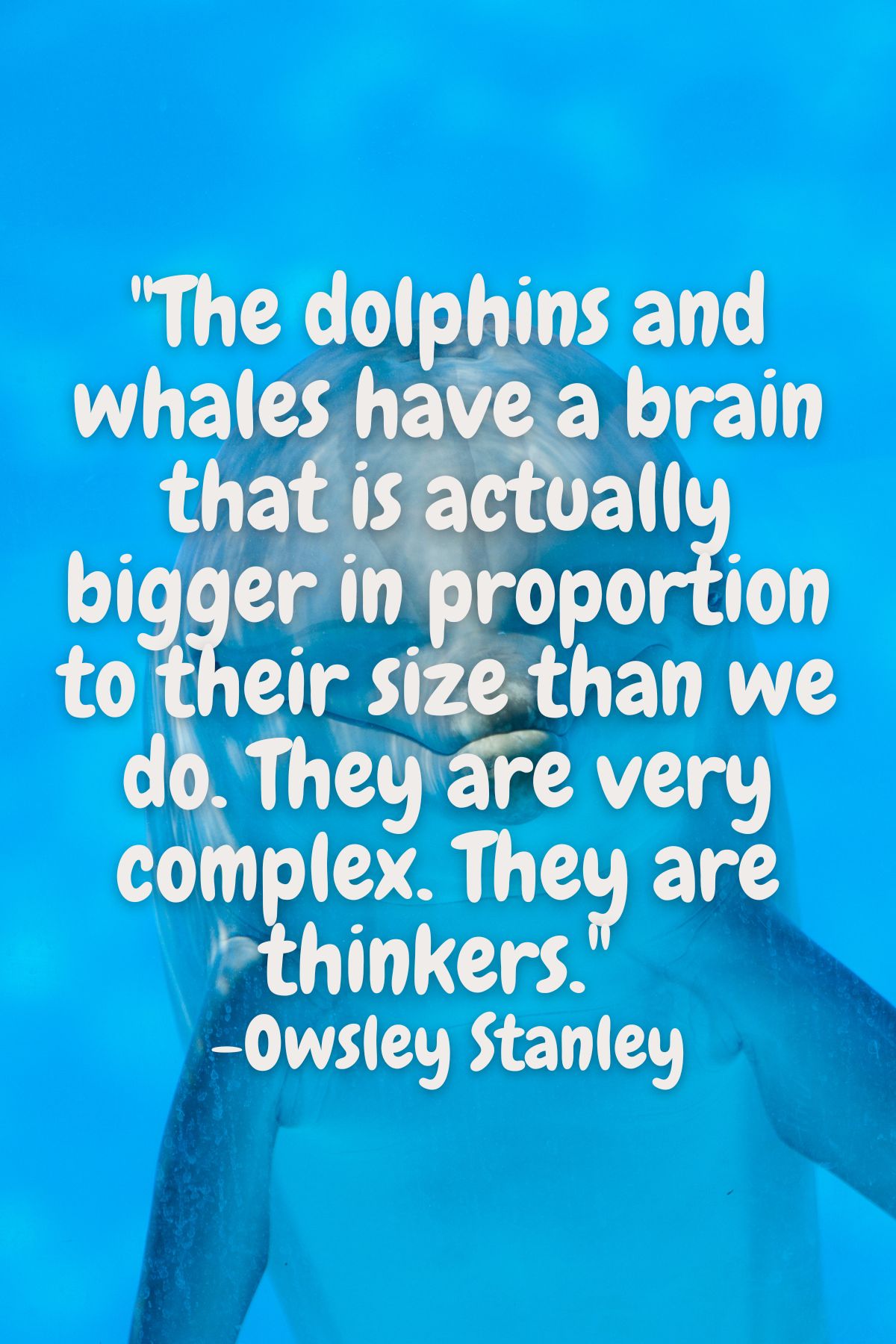 6. “My dream is to have a house on the beach, even just a little shack somewhere so I can wake up, have coffee, look at dolphins, be quiet and breathe the air.” Christina Applegate

7. “The happiness of the bee and the dolphin is to exist. For man, it is to know that and to wonder at it.” -Jacques Yves Cousteau

8. “Dolphin can lead us to an understanding of how to live in harmony with the twin needs of individuality and cooperation. Dolphin carries balance, peace, joy, compassion, love, and power.” -Loren Cruden

9. “Like a dolphin, I am graceful, powerful, and compassionate.” -Jonathan Lockwood Huie

10. “There may be a common thread of consciousness between man and dolphin.” -Joan McIntyre

11. “Humans think they are smarter than dolphins because we build cars and buildings and star wars etc., and all that dolphins do is swim in the water, eat fish, and play around. Dolphins believe that they are smarter for exactly the same reasons.” – Douglas Adams

12. “Don’t trust blindly. If in shark-infested waters, don’t assume the fin coming toward you is a dolphin.” -Mary Russel

13. “I break up through the skin of awareness a thousand times a day, as dolphins burst through seas, and dive again, and rise, and dive.” -Annie Dillard

15. “Kings also sleep; but the clever ones, with one eye open, just like dolphins and whales.” -Mehmet Murat Ildan

16. “When a dolphin swims into your life, then it’s time to add plenty of joy and playfulness into whatever you do.” – Millie Gemondo and Trish McGregor

17. “To get rid of depression, I swim with dolphins.” -Patti Stanger

18. “I have been honored to serve the whales, dolphins, seals — and all the other creatures on this Earth. Their beauty, intelligence, strength, and spirit have inspired me.” -Paul Watson

20. “Dolphins are social mammals, capable of enjoying their lives. They form close bonds with other members of their group.” -Peter Singer

21. “Dolphins are sunflowers of the water. They adore the Sun, they love the ocean and are kind to the land. They remind us to stay playful, keep our inner child safe and stand by loved ones.” –Reena Doss 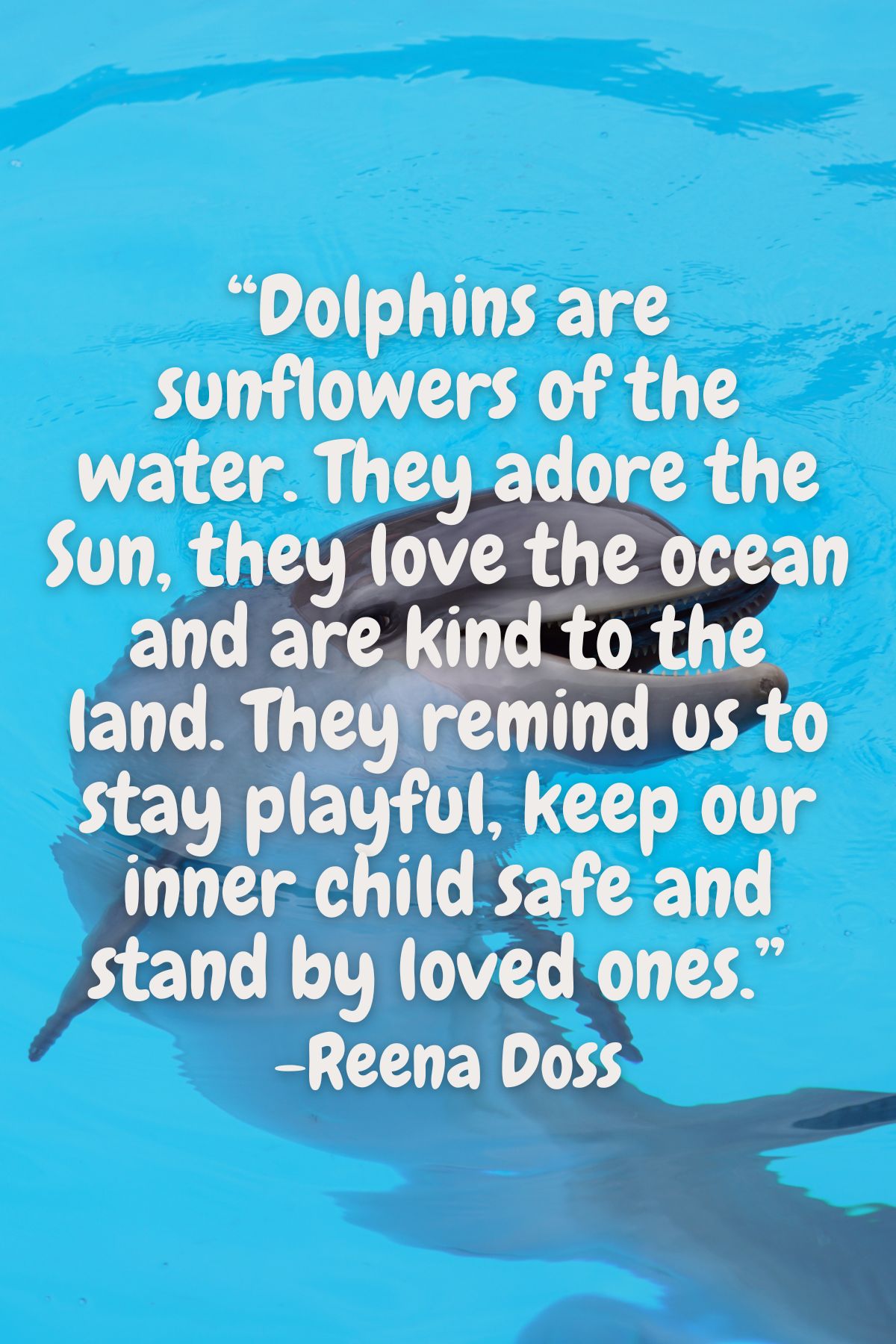 22. “Though pleased to see the dolphins play, I mind my compass and my way.” -Matthew Green

23. “Out at sea for a year/Floating free from all fear/Every day blowin’ spray/In a dolphin’s smile.” -The Byrds

24. “A dolphin’s smile is the greatest deception. It creates the illusion that they’re always happy.” -Ric O’Barry

25. “I feel at ease and, in an indefinable way, at home, when dolphins are around. I now know when they are nearby before they appear. I dream after they leave.” -Virginia Coyle

26. “To the Dolphin alone, beyond all other, nature has granted what the best philosophers seek: friendship for no advantage.” -Plutarch

27. “The vast blue ocean is waiting for her, and this is only the beginning of her story.” -Gill Lewis

28. “More than anything, it was the blue dolphins that took me back home.” -Scott O’Dell

29. “I have been honored to serve the whales, dolphins, seals — and all the other creatures on this Earth. Their beauty, intelligence, strength, and spirit have inspired me.” -Paul Watson

30. “We do not exploit our dolphins for profit.” -Fidel Castro

31. “Sometimes you’re crazy then you wonder why
I’m such a baby, yeah, the dolphins make me cry.” -Hootie & The Blowfish, “Only Wanna Be With You”

32. “See them play in the moonlight
Watch them dance in the sun
They’re the children of freedom — everyone
As they care for each other
With no question or cause
They deserve to be treasured as a source of love.” -Olivia Newton John, “The Promise (The Dolphin Song)”

33. “It’s plain to see that a whale is not for me, oh
In a choice between the ocean or golfing
I’d choose the dolphin
The life on a dolphin’s back” -Andrew Butler 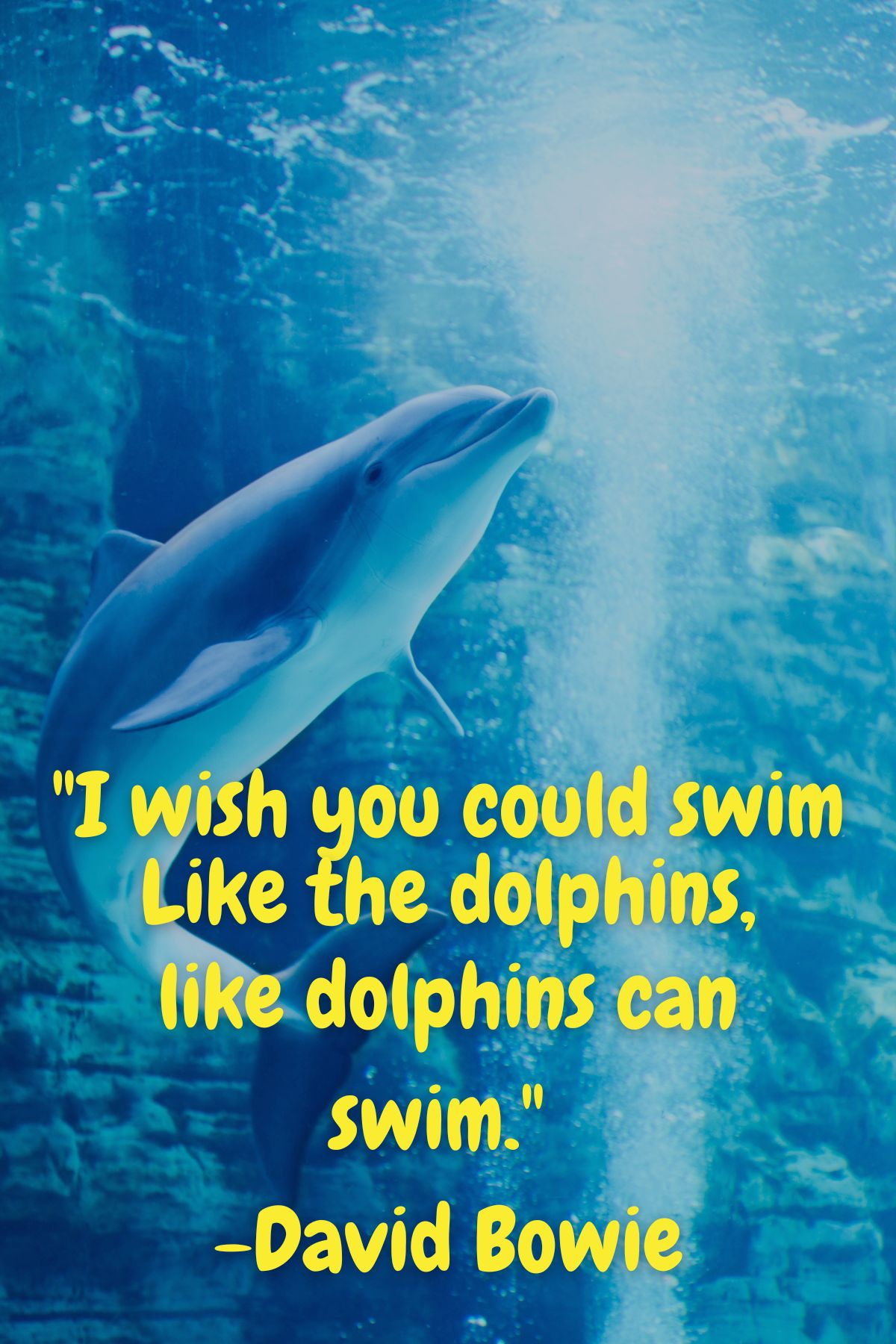 35. “What can books of men that live
In a dragon-guarded land
Paintings of the dolphin-drawn
Sea-nymphs in their pearly wagons
Do, but awake a hope to live… ?” -William Butler Yeats

36. “His delights
Were dolphin-like
They showed his back above
The element they lived in.” -William Shakespeare

37. “The singing of flutes gently animates the dolphin
In the depths of the waveless sea.” -Pindar

38. “Never trust a species that grins all the time. It’s up to something.” -Terry Pratchett

41. “If you think you are the mermaid, think again.
You are the ocean holding the mermaid afloat,
trying to change the world one dolphin at a time.” -Kelli Russell Agodon

42. “Dolphins: Animals that are so intelligent that, within a few weeks of captivity, they can train a man to stand on the edge of their pool and throw them food three times a day.” Hal Roach 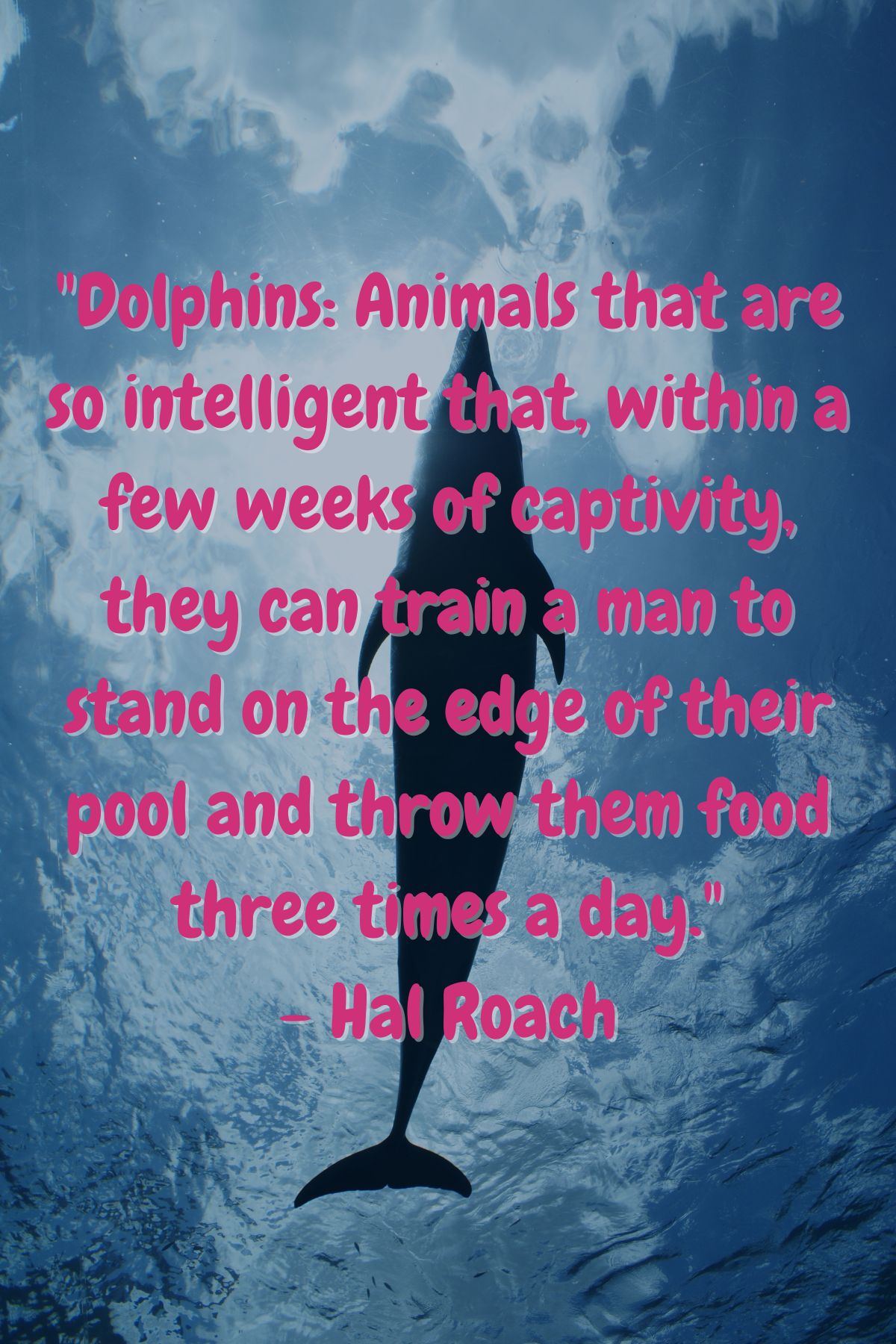 44. “There is something about dolphins. It is difficult to put into words.” -Mark Carwardine

46. “Yeah, dolphins and monkeys basically could play chess together. Those are brilliant animals.” -Perry DeAngelis

48. “Ducks are sweet, crows are intelligent; but I prefer dolphins because they are both sweet and intelligent.” -Mehmet Murat Ildan

50. “I invite you to entertain some new beliefs about dolphins … [that] these Cetacea with huge brains are more intelligent than any man or woman.” -John C. Lilly

51. “The voice of the dolphin in air is like that of the human, in that they can pronounce vowels, and combinations of vowels.” -Aristotle 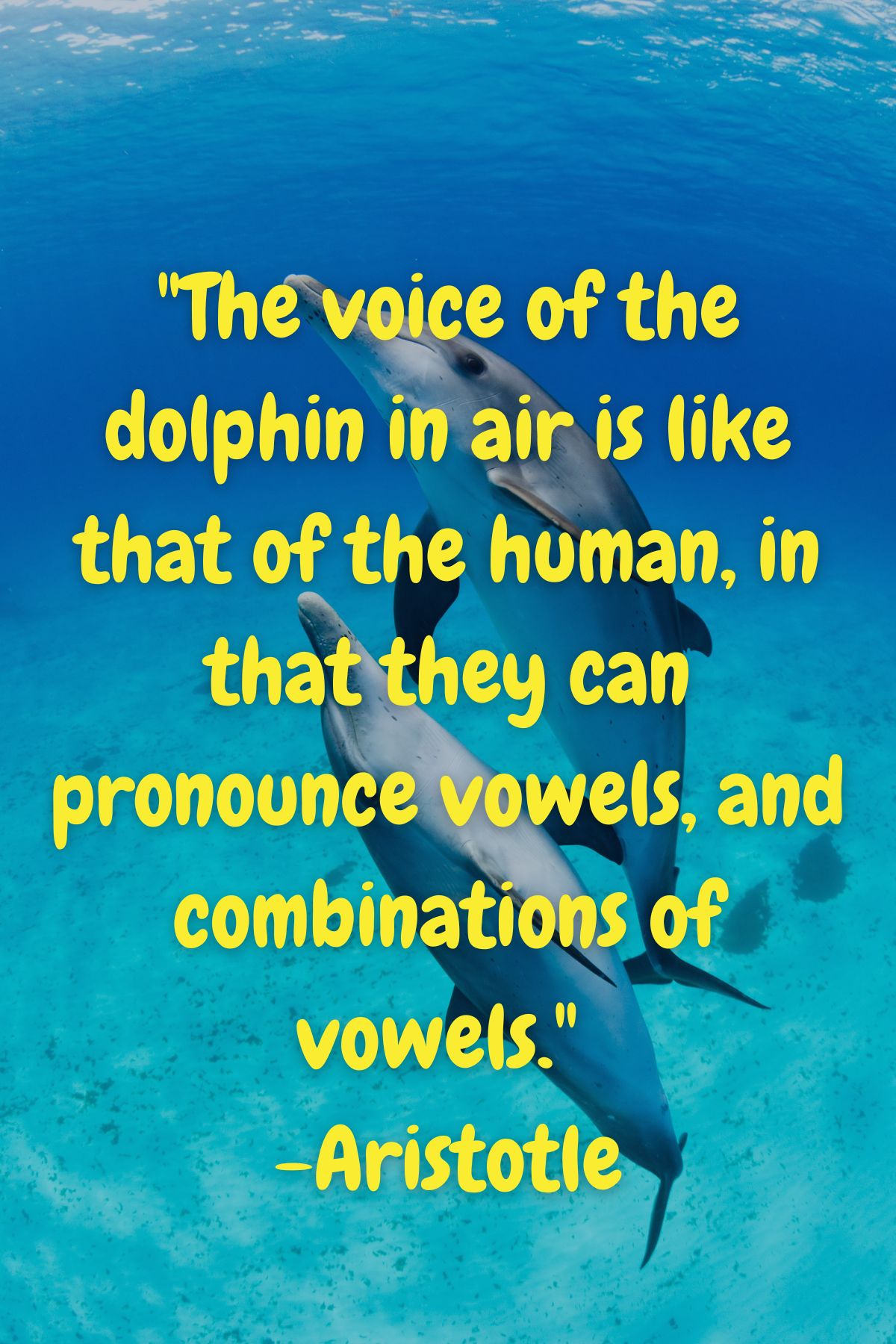 52. “Each minute wasted with a shark is a missed opportunity to enjoy being with a dolphin.” –Miguel Reynolds Brandão

53. “Not only children but also adults love dolphins because they are so full of love, warmth, and cuteness.” –Anonymous

54. “Dolphins may well be carrying information as well as functions critical to the regeneration of life upon our planet.” -R. Buckminster Fuller

55. “The swans have returned and so have the dolphins to the Canals of Venice. Nature creates the most beautiful art!” -Avijeet Das

57. “No aquarium, no tank in a marine land, however spacious it may be, can begin to duplicate the conditions of the sea. And no dolphin who inhabits one of those aquariums or one of those marine lands can be considered normal.” -Jacques Yves Cousteau

58. “In 100 years I want whales, dolphins and sharks to still be around, and the ocean to be a healthier place.” -Greg MacGillivray

59. “The dolphin in tungsten leaps, and then again with a belly raised to a marmalade sky; and another whirl—free like a rust-toned crane. Breaths in awe, an enchantment is my reply.” – Nette Onclaud

60. “There is about as much educational benefit to be gained in studying dolphins in captivity as there would be studying mankind by only observing prisoners held in solitary confinement.” -Jacques Yves Cousteau

61. “If dolphins are so intelligent, how come they ain’t got Walkmans?” -John Lydon

62. The dolphins need your help today so they can continue to swim and play.

64. Dolphins are my spirit animal. 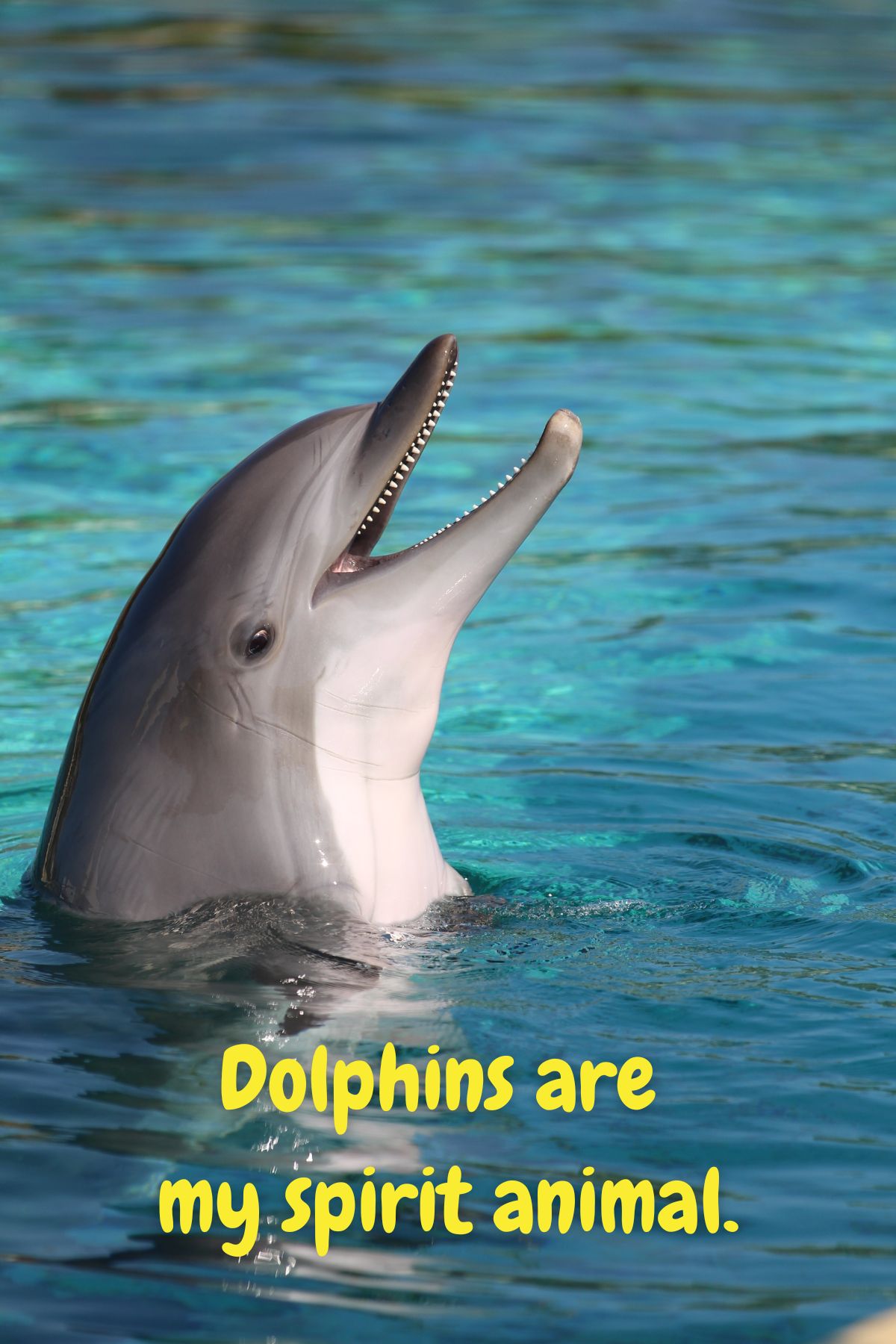 69. Dolphins are friendly and adorable and that’s why they make such cute friends to humans. Let us protect them together.

75. I can finally tick swimming with dolphins off my bucket list.

Dolphin Quotes to Make Your Day

76. “Sharks are the criminals of the sea. Dolphins are the outlaws.” -Tom Robbins

77. “The creatures of the sea hold special mystery, and they are among the most exciting, graceful, and beautiful on Earth. Just consider the living riot of a coral reef, the beauty of an albatross, the awesome power of a giant turtle, the grace of a dolphin. Now multiply that by the millions of creatures in the sea. Wow!” -Carl Safina

78. “One human life is deeper than the ocean. Strange fishes and sea-monsters and mighty plants live in the rock-bed of our spirits. The whole of human history is an undiscovered continent deep in our souls. There are dolphins, plants that dream, magic birds inside us. The sky is inside us. The earth is in us.” -Ben Okri

79. “What does kissing really mean to me? To me, if you feel, when you kiss a girl, that certain feeling of all those dolphins, like, swimming through your bloodstream, and you get those good tingles inside your stomach, I don’t think there’s any better feeling.” -Corey Haim

80. “I WAS a mermaid in my past-life! I definitely was. I don’t know why I’m obsessed with them that much, which is why I think that somehow in my past-life I must have just lived underwater or something. Maybe I was a fish or a dolphin, but I do believe in mermaids.” -Ella Henderson

81. “Yes, here I am returning, the woman who bore herself to the bottom and back. Who wanted to swim like dolphins, leaping waves and diving. Who wanted only to belong to herself.” -Sue Monk Kidd 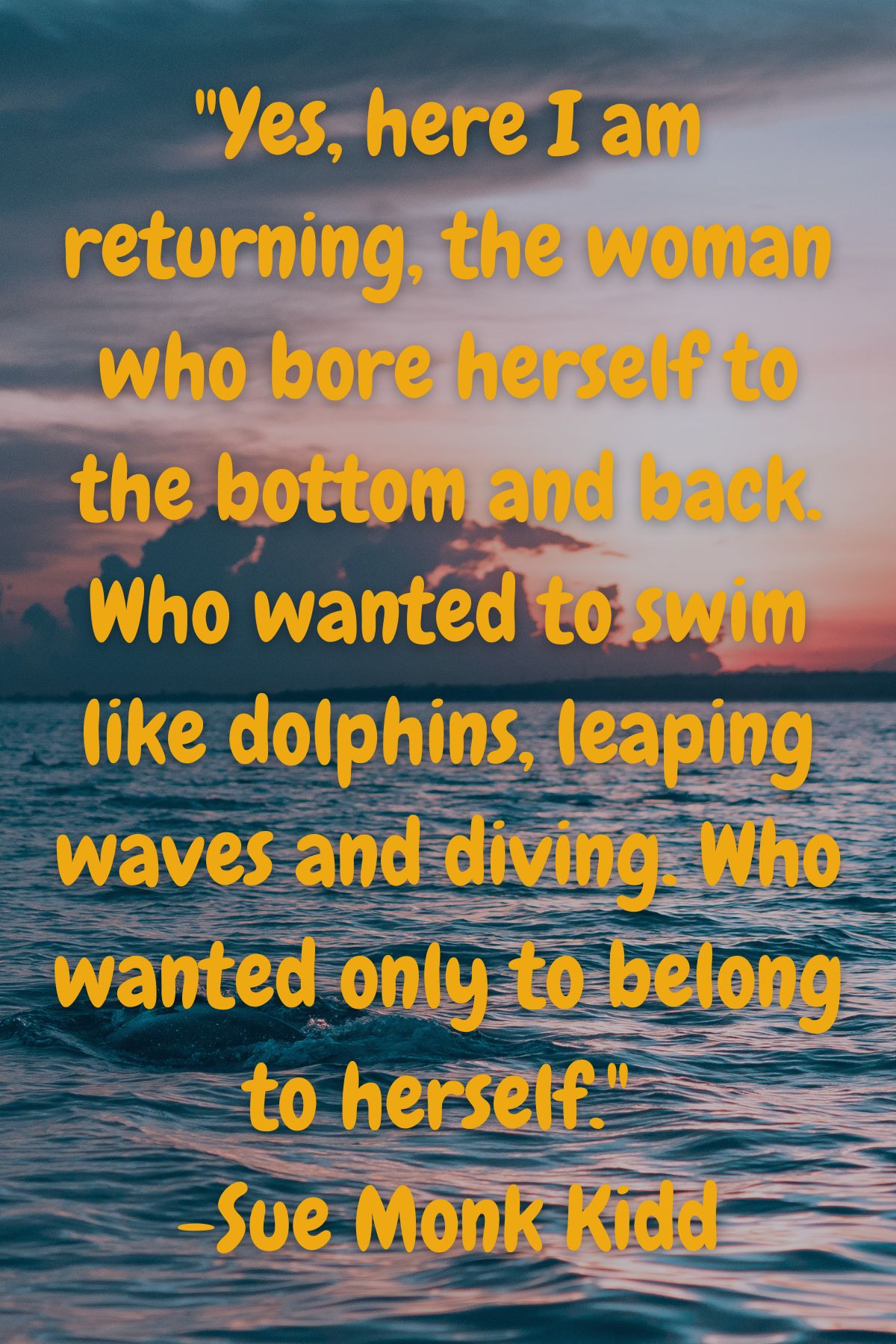 82. “I am really quite fascinated by echo-locating bats and dolphins and have always wondered how sound affects the unconscious brain.” -Evelyn Glennie

83. “I, the soul named Wanderer, love you, human Ian and that will never change no matter what I might become. If I were a Dolphin or a Bear or a Flower, it wouldn’t matter. I would always love you, always remember you. You will be my only partner.” – Stephenie Meyer

84. “I thought [when I was 16] my days were just going to be spent hanging out on a beach and my girlfriend was going to be Miss Teen USA and my best friend will be a dolphin.” -Aasif Mandvi

85. “One can teach dolphins to jump simultaneously out of the water precisely because they show similar behavior spontaneously but try to make two domestic cats jump together and you will fail.” -Frans de Waal