Inside: Fascinating bear quotes to prepare you for summer adventure outdoors.

Bears are complex creatures from the carnivorous mammal family, and there are approximately eight different species of them known to humankind today. Because this animal is widespread across borders, it’s not shocking that most people find this animal to be intriguing.

So much so that there are countless times we have honored them as our friends in tales, legends, movies, and shows. If you love bears and are on the lookout for exciting bear quotes to remember and perhaps even learn from, we have the perfect list of bear quotes just for you!

Keep reading to find cute, inspiring, and educational bear quotes that you can use as your social media caption or inspirational sayings to live by. 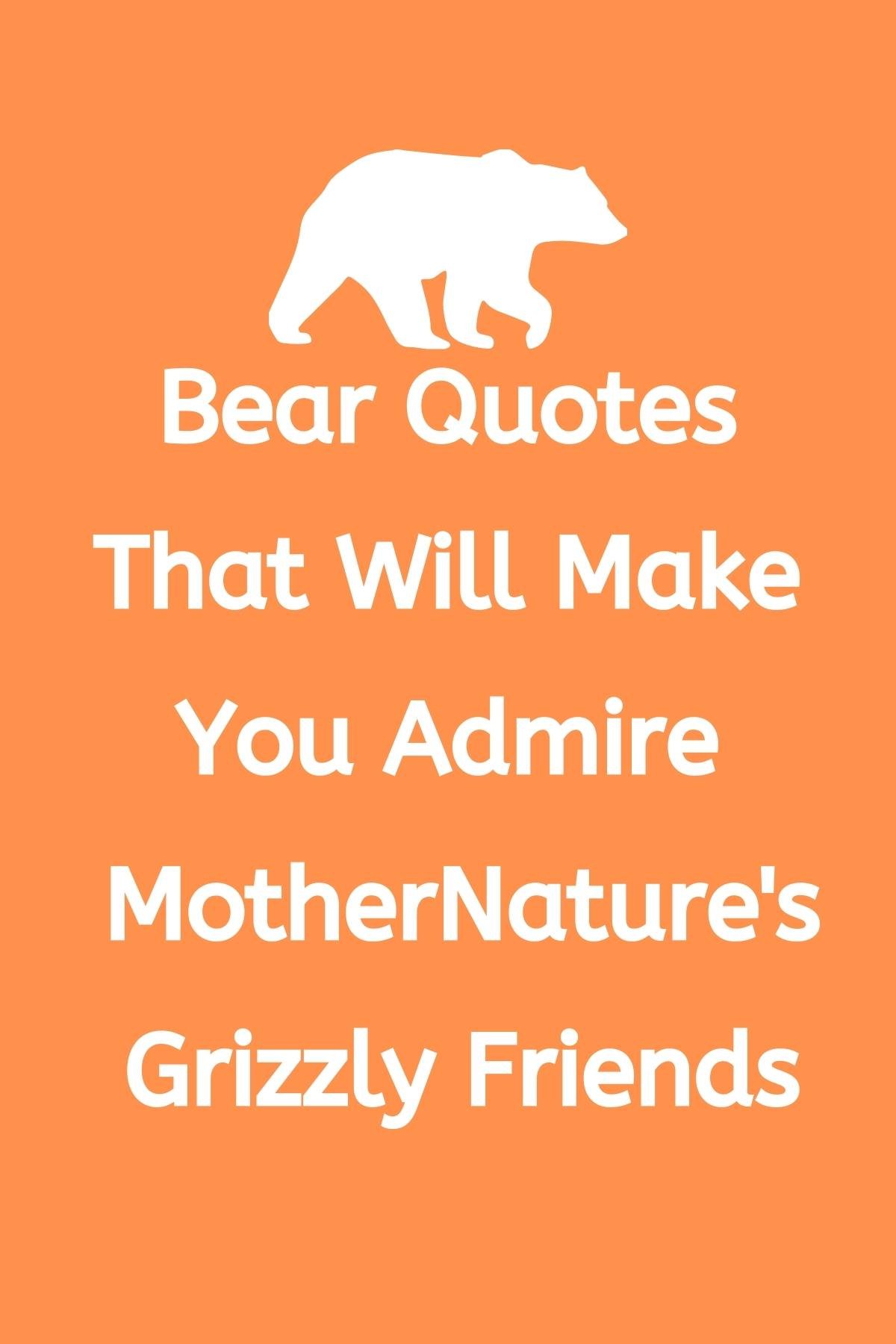 The Most Popular Quotes on Bears

Let’s begin with some of the most famous quotes on bears, shall we?

3. “Bears project a mighty physical presence and a capacity for action. They are smart—something that often becomes apparent the moment you come face-to-face with one.” – Charles Fergus

4. “Bears have been known to attack man, although the fact is that fewer people have been killed by bears than in all of World War I and World War II combined.” – Peter Gaulke

5. “Bears look like they might be slow because they have short legs and large feet. However, some kinds can move very quickly!” – Therese M. Shea

8. “All of the authoritative books on bears seem to agree on one thing—if you’re close enough to a bear to cause it to change its activity pattern, you’re too close, and in possible danger.” – Dennis R. Blanchard

9. “He tried to act like a bear, and for us on the island, you don’t do that. You don’t invade their territory. For him to act like a bear the way he did, to me it was the ultimate act of disrespecting the bear and what the bear represents.” – Werner Herzog 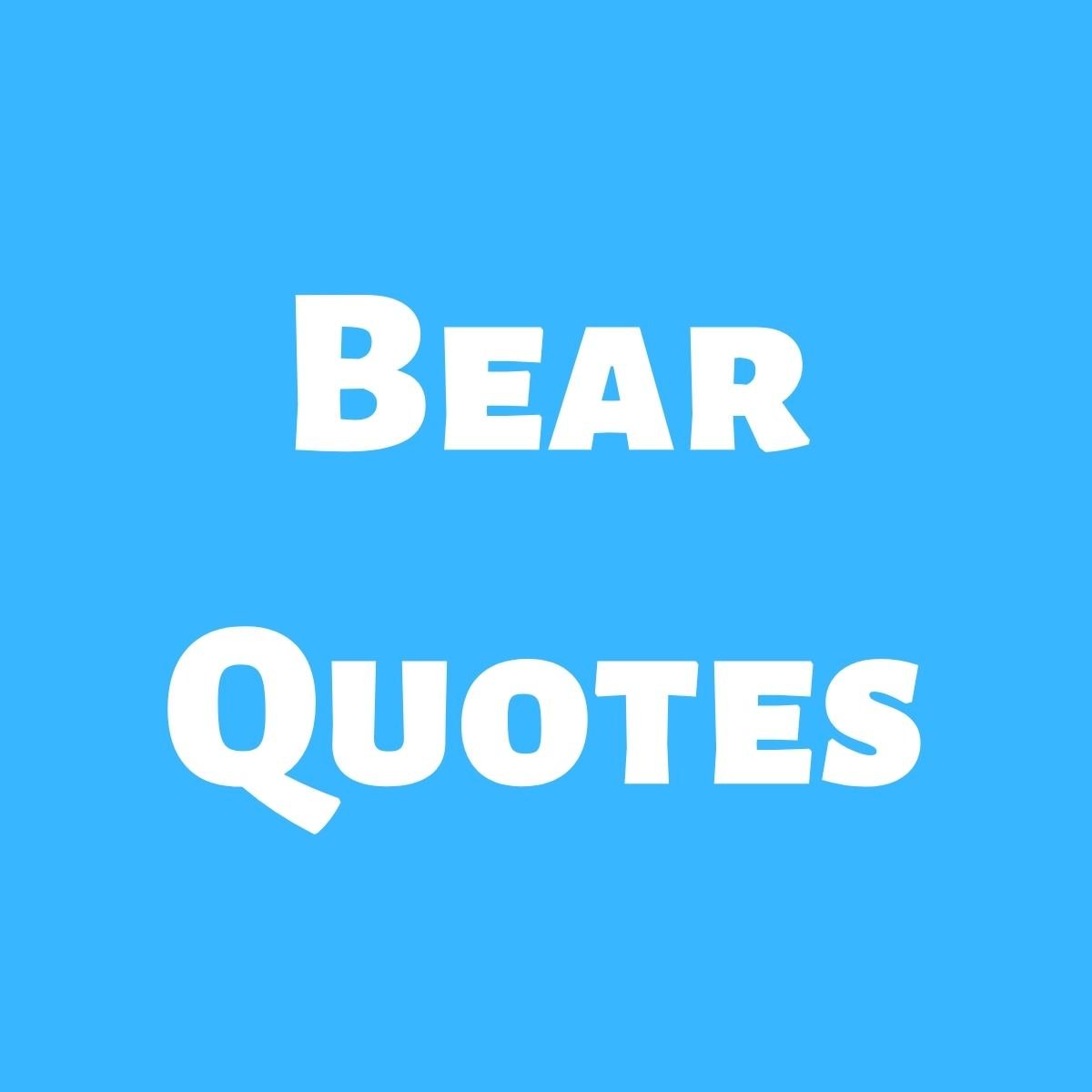 10. “The grizzly is a symbol of what is right with the world.” – Charles Jonkel

11. “Anyone who has looked a teddy bear in the face will recognize the friendly twinkle in his knowing look.” – Harold Nadolny

The following bear quotes will explain just how much this furry animal is capable of and what we can learn from them as human beings:

12. “When a pine needle falls in the forest, the eagle sees it; the deer hears it, and the bear smells it.” – First Nations

13. “While bears don’t live in established groups or obey rigid hierarchies as chimps and wolves do, they have amazingly complex social relationships.” – Benjamin Kilham 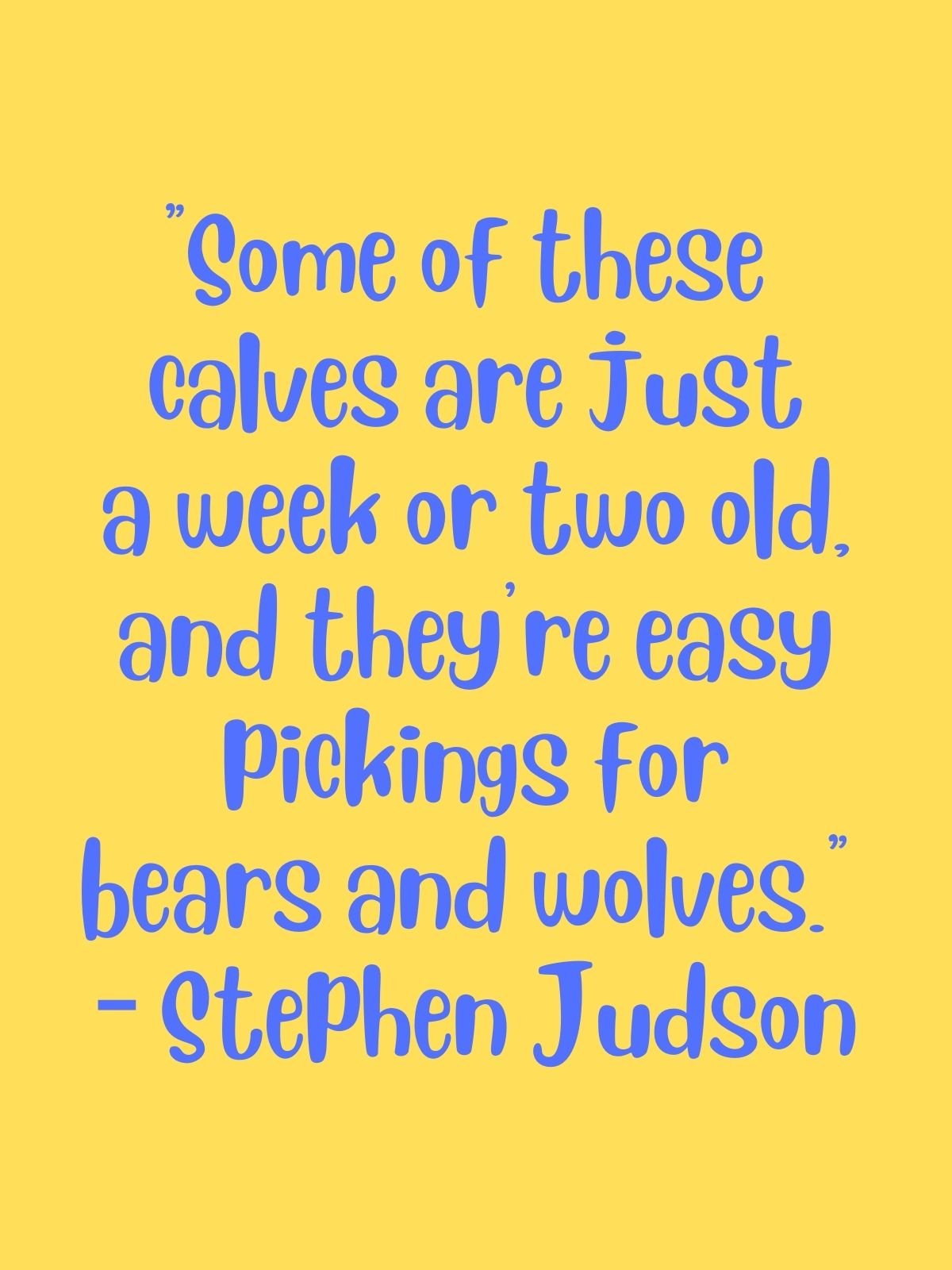 14. “Some of these calves are just a week or two old, and they’re easy pickings for bears and wolves.” – Stephen Judson

16. “The bears went out one day looking for food which was other bears.” – Andrew Witham

17. “There were all kinds of things I was afraid of at first—ranging from grizzly bears to ‘mean’ horses and gun-fighters; but by acting as if I was not afraid, I gradually ceased to be afraid.” – Theodore Roosevelt

18. “This is a cold, stark world, but to polar bear mothers and cubs, it’s paradise.” – Stephen Judson

19. “And maybe you are a little fat bear cub with no wings, and no feathers.” – Else Holmelund Minarik

20. “It is estimated that bears kill over two million salmon a year. Attacks by salmon on bears are much more rare.” – Peter Gaulke

21. “The bear, he says, is many animals in one. Like a lion, he downs mammals much bigger than he; like any ruminant, he pillages crops; he steals grapes and fruit like a monkey; nibbles on berries like a blackbird; plunders anthills and beehives like a woodpecker; digs up tubers and larvae like a pig; and catches fish with the dexterity of an otter. And he eats honey like a man.” – Paolo Rumiz

22. “Those who have packed far up into grizzly country know that the presence of even one grizzly on the land elevates the mountains, deepens the canyons, chills the winds, brightens the stars, darkens the forest, and quickens the pulse of all who enter it. They know that when a bear dies, something sacred in every living thing interconnected with that realm also dies.” – John Murray

23. “Bears keep me humble. They help me to keep the world in perspective and to understand where I fit on the spectrum of life. We need to preserve the wilderness and its monarchs for ourselves, and for the dreams of children. We should fight for these things as if our life depended upon it because it does.” – Wayne Lynch

Want to know the most famous bear quotes of all time? Read them below!

24. “Magnificent bears of the Sierra are worthy of their magnificent homes. They are not companions of men, but children of God, and His charity is broad enough for bears.” – John Muir.

25. “Bears with their great size and strength, remind us of how weak and ineffectual we are as organisms: a bear, even a small one, could abolish a human fairly easily.” – Charles Fergus.

26. “When you are where wild bears live you learn to pay attention to the rhythm of the land and yourself.” — Linda Jo Hunter

27. “Bears remind us of ourselves. They walk on the flats of their feet, as people do.” – Charles Fergus 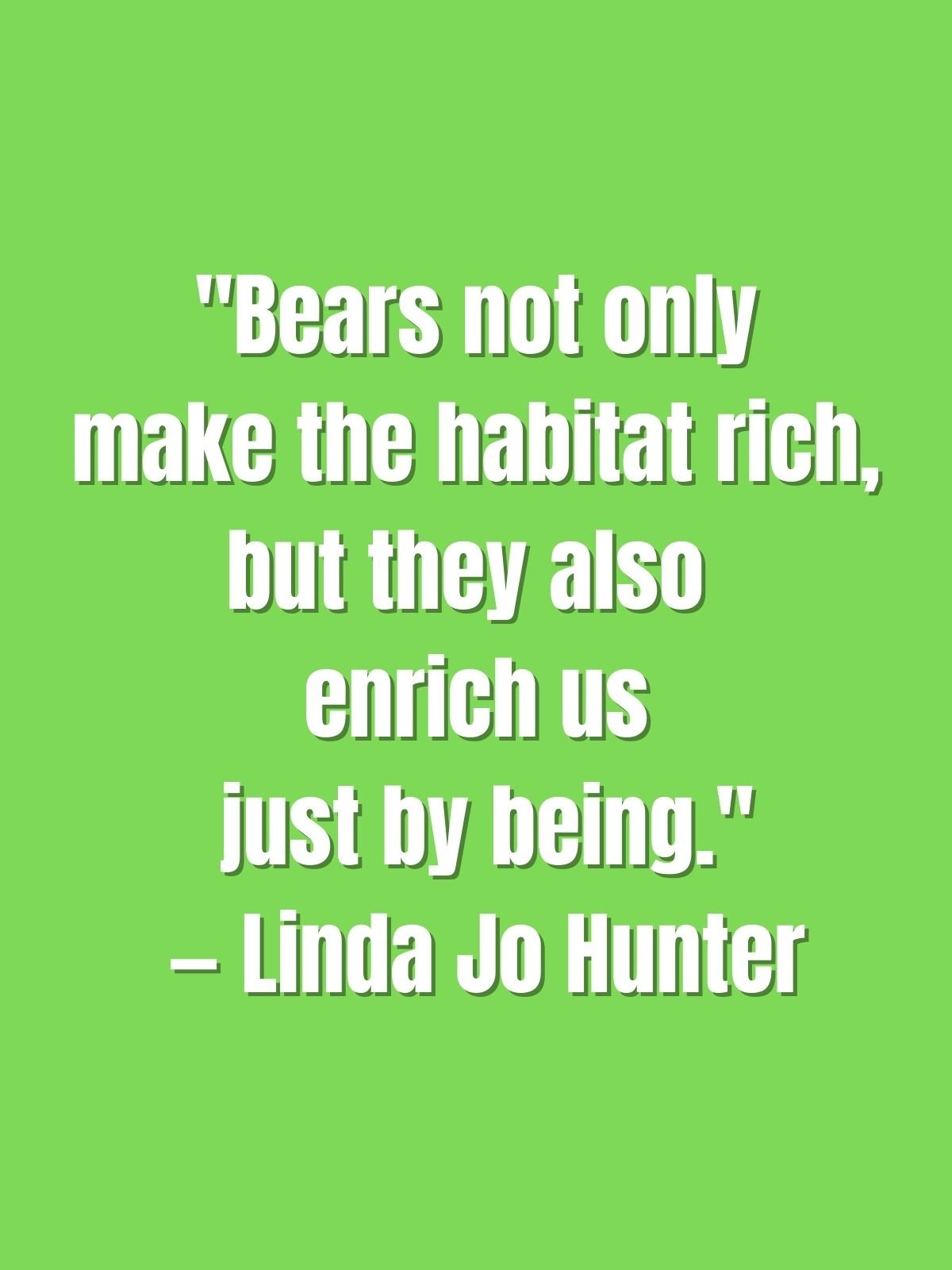 28. “Bears not only make the habitat rich, but they also enrich us just by being.” — Linda Jo Hunter

29. “Aggression in bears can be, and often is, a stepping stone to friendship. Friendship and alliances frequently develop by repeated interactions, with initial aggression that lessens over time.” – Benjamin Kilham

30. “The problem is that bears are pretty smart and humans aren’t. We’ll move into a remote area and leave a bag of dog food on our front porch and then panic when we see a grizzly bear helping himself to a meal.” – Bruce W. Cameron

31. “The gypsies believe the bear to be a brother to man because he has the same body beneath his hide, because he drinks beer, because he enjoys music and because he likes to dance.” – Ernest Hemingway

If you found these bear quotes to be exciting and they piqued your interest in Mother Nature’s many gifts to humankind, you’ll love reading the following blogs: