Inside: Metal Gear Quotes That Will Make You Think.

When I was growing up, the most intense video games I would play were Mario Cart and Donkey Kong. These days though, the world of video games has reached unexpected levels of awesomeness. At the peak of this awesomeness sits Metal Gear.

Metal Gear is a series of techno-thriller stealth games designed by Hideo Kojima. It first came out in the late 80s, and it has stuck around through the years. It has a solid fan base (pun totally intended), and it is one of the most interesting games you can play.

The visuals or one thing, but in my opinion, the best part of the game is the dialog. 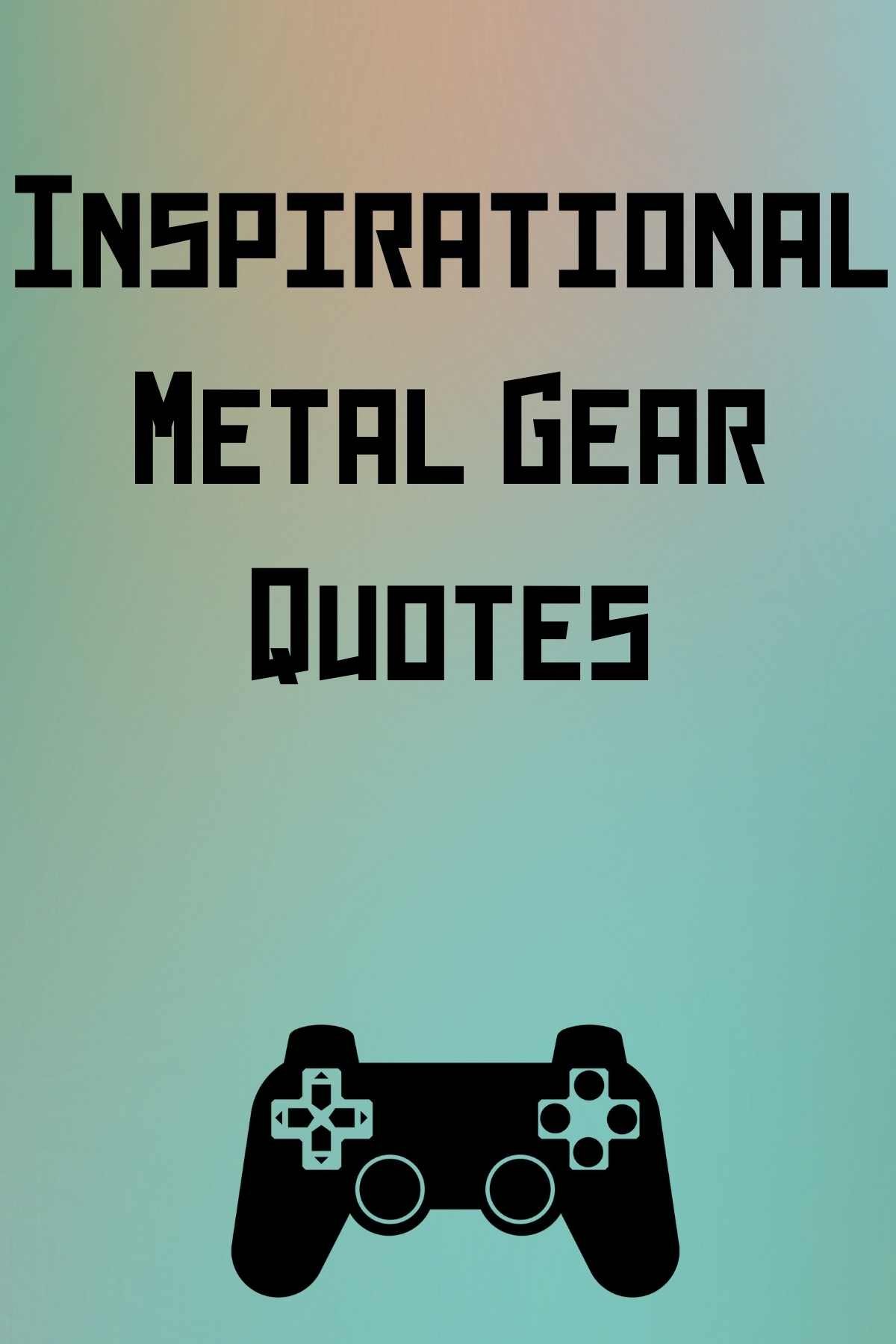 Metal Gear is full of some of the best quotes that I have ever seen. They are so good that I felt compelled to make an entire list of them for you to read. Take a look below to go through some of the most inspirational Metal Gear Quotes in the game.

I have never truly seen the effect that video games can have on a community of people until I talked to fans of Metal Gear. I love it. People are so passionate and know all of these amazing facts off the top of their heads. These quotes are some of the best, so take a look.

1. “Never doubt yourself; just let it make you stronger. Learn something from it!” – Solid Snake

2. “Girlfriend, you are so on because the United States of America is going to be the best place for your child to grow up.” – Solid Snake

3. “It’s not about changing the world. It’s about doing our best to leave the world…the way it is. It’s about respecting the will of others and believing in your own.” – Big Boss

4. “The human race will probably come to an end sometime, and new species may rule over this planet. Earth may not be here forever, but we still have the responsibility to leave what traces of life we can. Building the future and keeping the past alive are one and the same thing.” – Solid Snake

5. “If you ask me, there’s no happiness to be found in death…no peace either, I’m leaving here alive.” – Solid Snake

6. “It’s not whether you were right or wrong, but how much faith you were willing to have that decided the future.” – Snake

7. “You and I are doomed to remain here until we die like dogs on the battlefield.” – Big Boss

9. “There are no heroes in war. The only heroes I know are either dead or in prison. One or the other.”

10. “Meryl Silverburgh: So… tell me Snake, what’s your name? Your real name?

Solid Snake: A name means nothing on the battlefield.

Meryl Silverburgh: How old are you?

Solid Snake: Old enough to know what death looks like.”

It’s weird to think of it as just a video game. Especially when reading through all of these quotes. It feels like such a story, so well thought out and beautifully said. Admittedly, some of these are just straight-up hilarious and not so much inspirational, but there is a good balance.

11. “Otacon: Snake… Do you think love can bloom, even on a battlefield?

Snake: Yeah, I do. I believe at any time, any place, people can fall in love with each other. But… if you love someone, you have to be able to protect them.”

12. “Liquid Snake: So the Snake’s finally come out of his hole? Are you ready now… my brother?

Solid Snake: Why are you calling me brother? Who the hell are you?

13.  “Solid Snake: We don’t use guns to take people down, and we’re not here to help some politician either.

Raiden: What are you and Otacon fighting for? 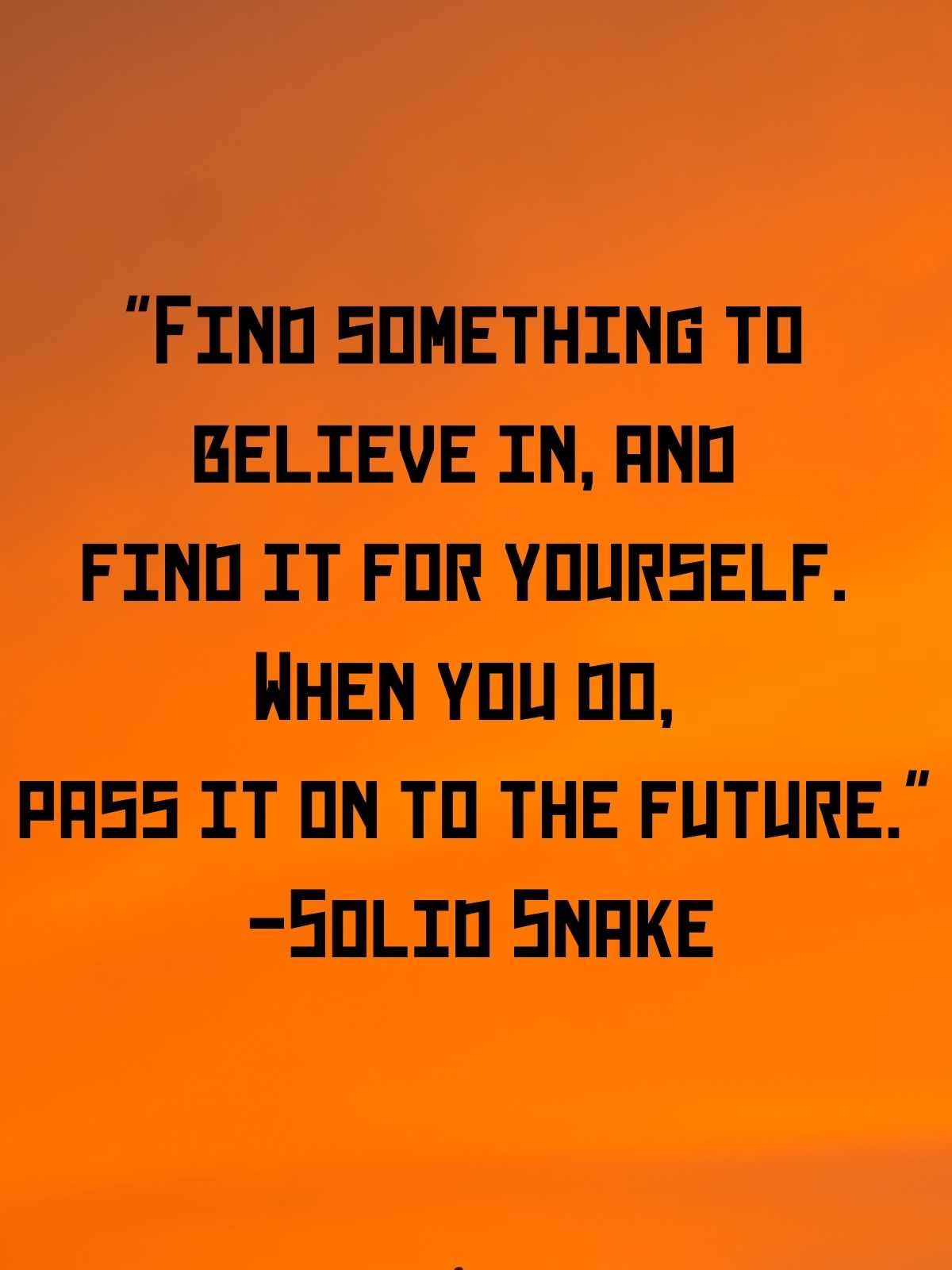 15. “We can tell other people about having faith. What we had faith in. What we found important enough to fight for. It’s not whether you were right or wrong, but how much faith you were willing to have, that decides the future.”

16. “So then what is an enemy? Is there such thing as an absolute timeless enemy? There is no such thing and never has been. And the reason is that our enemies are human beings like us. They can only be our enemies in relative terms.” – The Boss

17.  “There’s no such thing in the world as absolute reality. Most of what they call real is actually fiction. What you think you see is only as real as your brain tells you it is.”

18. “Find something to believe in, and find it for yourself. When you do, pass it on to the future.” -Solid Snake, MGS2

“What little time I have left will be spent living… as a beast. A shadow of the inside… of the old age.” – Snake

This list is full of some of the most inspirational Metal Gear quotes that I have come across. Honestly, these quotes and this game have given me a whole new view of the depth that games these days can have. I have heard that this game balances its comedy and it’s seriousness super well, and I can see it with this dialog.

21.  “The foibles of politics and the march of time can turn friends into enemies just as easily as the wind changes. Ridiculous, isn’t it?” – The Boss

23. “To do the right thing, you sometimes have to leave the things you care about behind.” – The Boss

24. “This is the first time I’ve used my powers to help someone. It’s strange… It feels kind of … nice…” – Psycho Mantis

25. “War has changed. Our time has ended. Our war is over. But there’s one more thing I must do… the last punishment I must endure. Erase my genes… wipe this meme from the face of the Earth. This… is my final mission.” – Snake

26. “We’re not tools of the government, or anyone else. Fighting was the only thing I was good at, but at least I fought for what I believe in.” – Solid Snake

27. “He who controls the battlefield, controls history.”

28. “Under certain conditions, someone can be made to play a specific role. Act like someone else.”

“Time for you to put aside the gun, and live.”

30. “Boss…you only need one snake. No…the world would be better off without snakes.”

31. “I raised you, and loved you, I’ve given you weapons, taught you techniques, endowed you with knowledge. There’s nothing more for me to give you. All that’s left for you to take is my life.” – The Boss 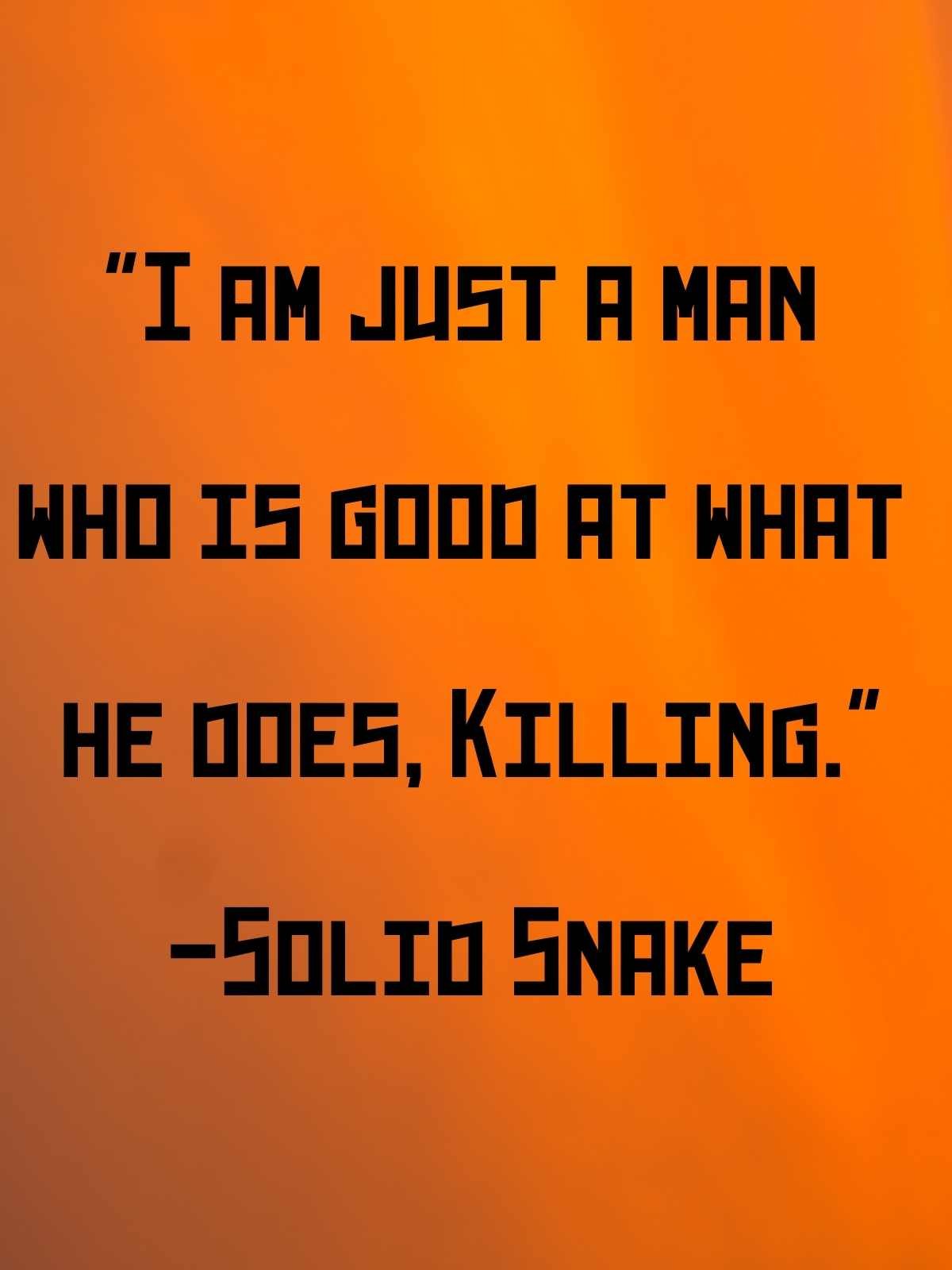 Metal Gear Quotes That Will Make You Think

And last but certainly not least…we have some quotes that will make you think. I mean, yes, some of these are just funny, but around those are some real gems. I couldn’t make them all serious because that just isn’t the entire nature of the game. Take a look and see what I mean.

32. “Unfortunately, killing is one of those things that gets easier the more you do it.”

33. “This place is crawling with lizards…” – Old Snake

34. “You mustn’t allow yourself to be chained to fate, to be ruled by your genes.” – Snake

36. ” What about you, Jack? What’s it going to be? Loyalty to your country, or loyalty to me? Your country, or your old mentor? The mission, or your beliefs? Your duty to your unit, or your personal feelings? You don’t know the truth yet. But sooner or later you’ll have to choose.” – The Boss

39. ”My fatherland – my truth was stolen from me. And so was my past. All that’s left is the future. And mine is revenge.” – Skull Face 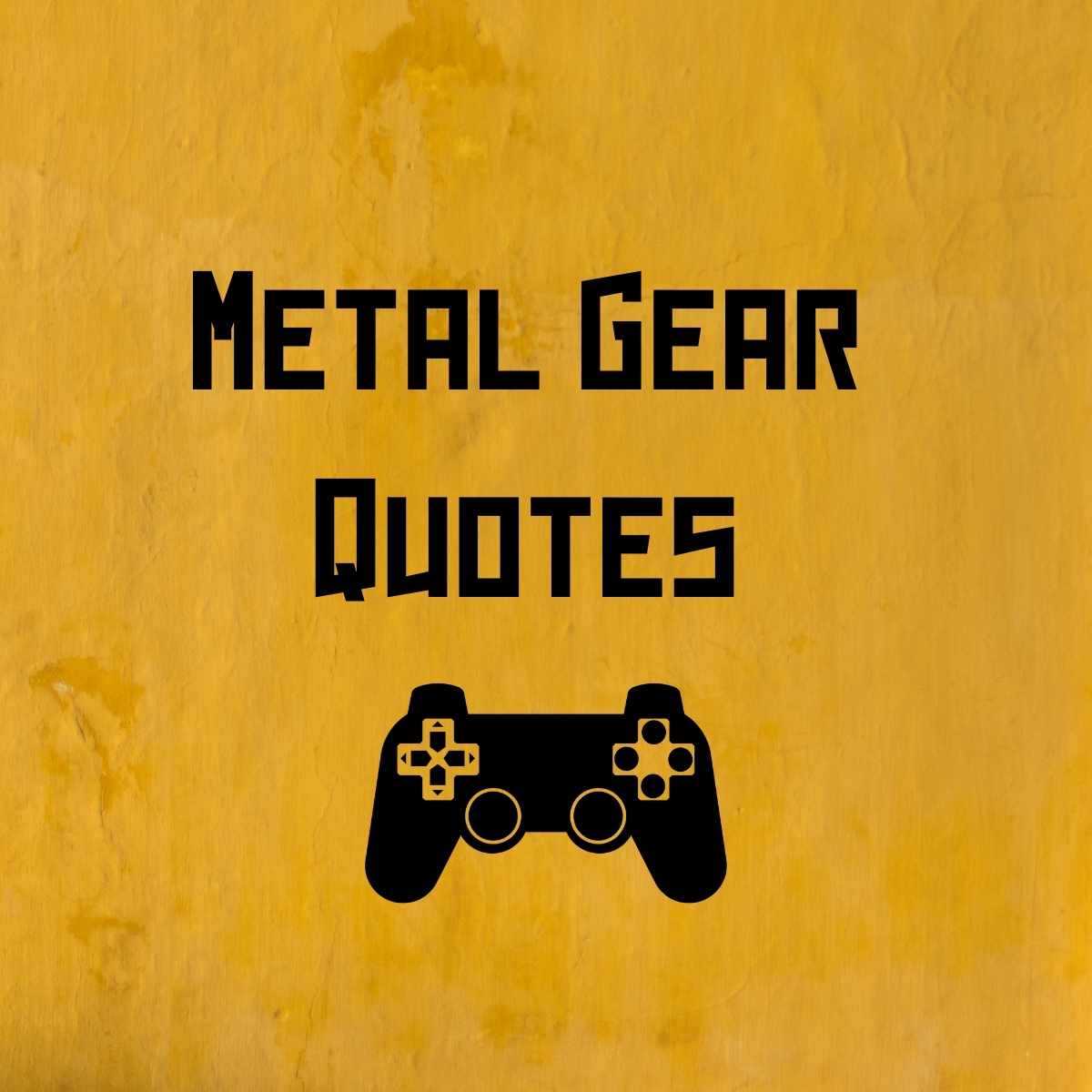 So…are you shocked? All of these quotes came from a video game. That still blows my mind. I am going to have to play this game just so I can see where all of these quotes fit. Plus, I am genuinely so curious about this storyline now.

Video games these days are a new breed. I know that some silly ones still exist, but reading these quotes just showed me how much thought and art goes into making them. I hope you loved these Metal Gear Quotes, and if you are a fan reading this…I hope that I didn’t mess up any of the names or the quotes for that matter.

If you loved these, then you should continue on the fun with some of our other quote ideas. We have plenty!