Inside: Know a Libra or you are one? These Libra quotes that bring balance are for you!

The Libra sign is the seventh sign of the twelve zodiac signs. Libra is an air sign, and rules from September 23-October 22. The constellation that represents Libra looks like a pair of scales, and represents Libra’s love of balance and fairness.

Libra season brings a welcomed relief from the summer heat, for she brings with her the fall season. The time of the year when the air turns crisp and the leaves change colors.

Libras are considered to be balanced, social and diplomatic. Libras are known for their selfless nature and companionship, and their loyalty stands the test of time. They make amazing friends and partners because of their commitment to harmony and happiness.

If you’re a Libra or just looking for quotes to celebrate Libra season, this collection of 73 Libra Quotes That Bring Balance is for you! 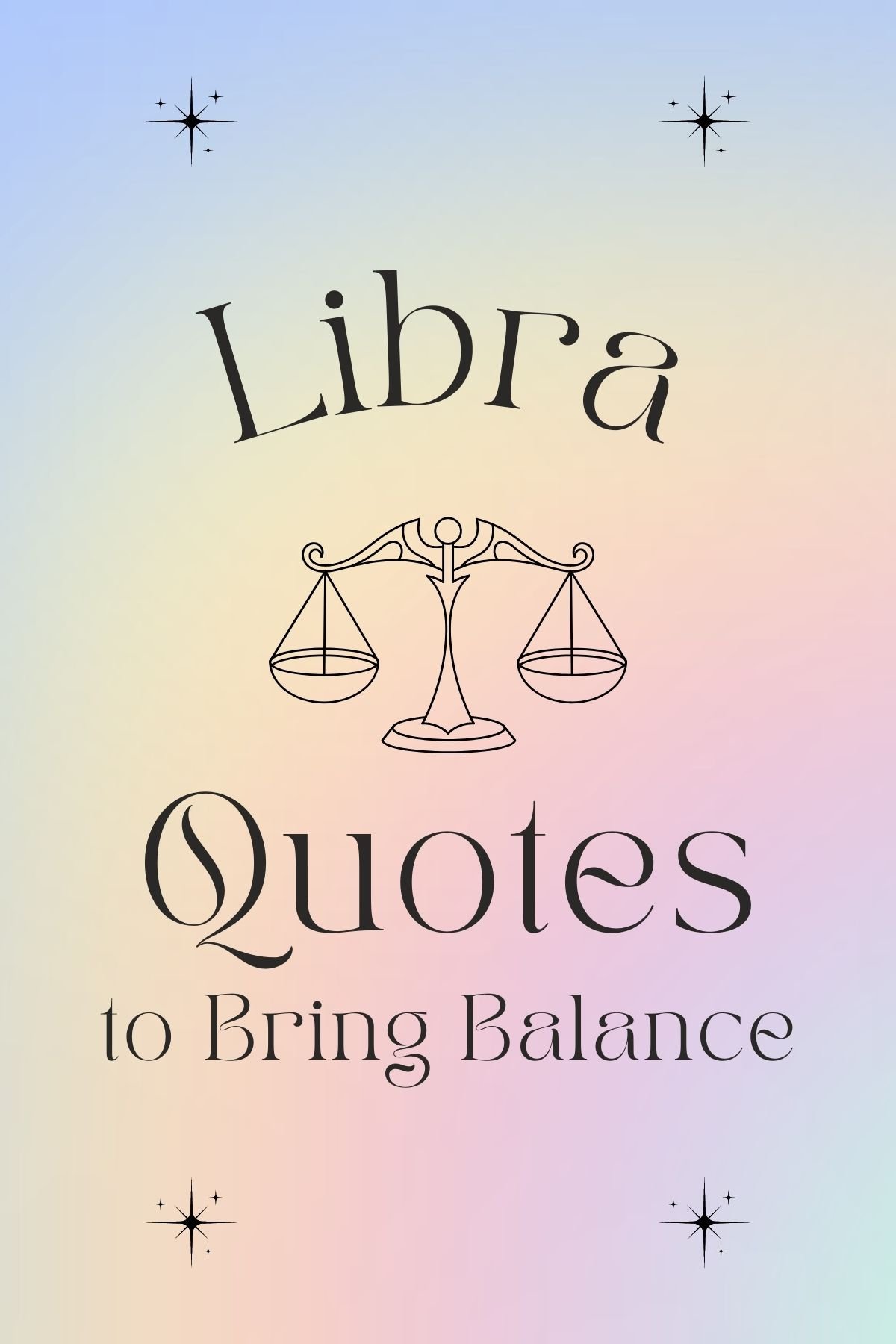 15 Libra Quotes Sure to Charm You

1.“I’m a Libra, I always have two sides of everything.” — India Arie

2. “Libras hate to see others hurting, but when you irritate them their temper can be destructive.” — Anonymous

3. “Libra is the Scales, sir. Justice maybe? The idol could be a statue by the Law Courts.” —DS Peter Jakes

4. “I’m pretty good at thinking about everything – all of my consequences – before I make a decision, and I think about everything that’s going to happen because of that decision. I’m a Libra, and I’m very strategic.” — Hilary Duff

8. “I always feel more grounded and stable when I have balance in my life; I’m a Libra!” — Laura Regan

9. “There is nothing that Libra wants more than peace, harmony, and beautiful surroundings.” — Chani Nicholas 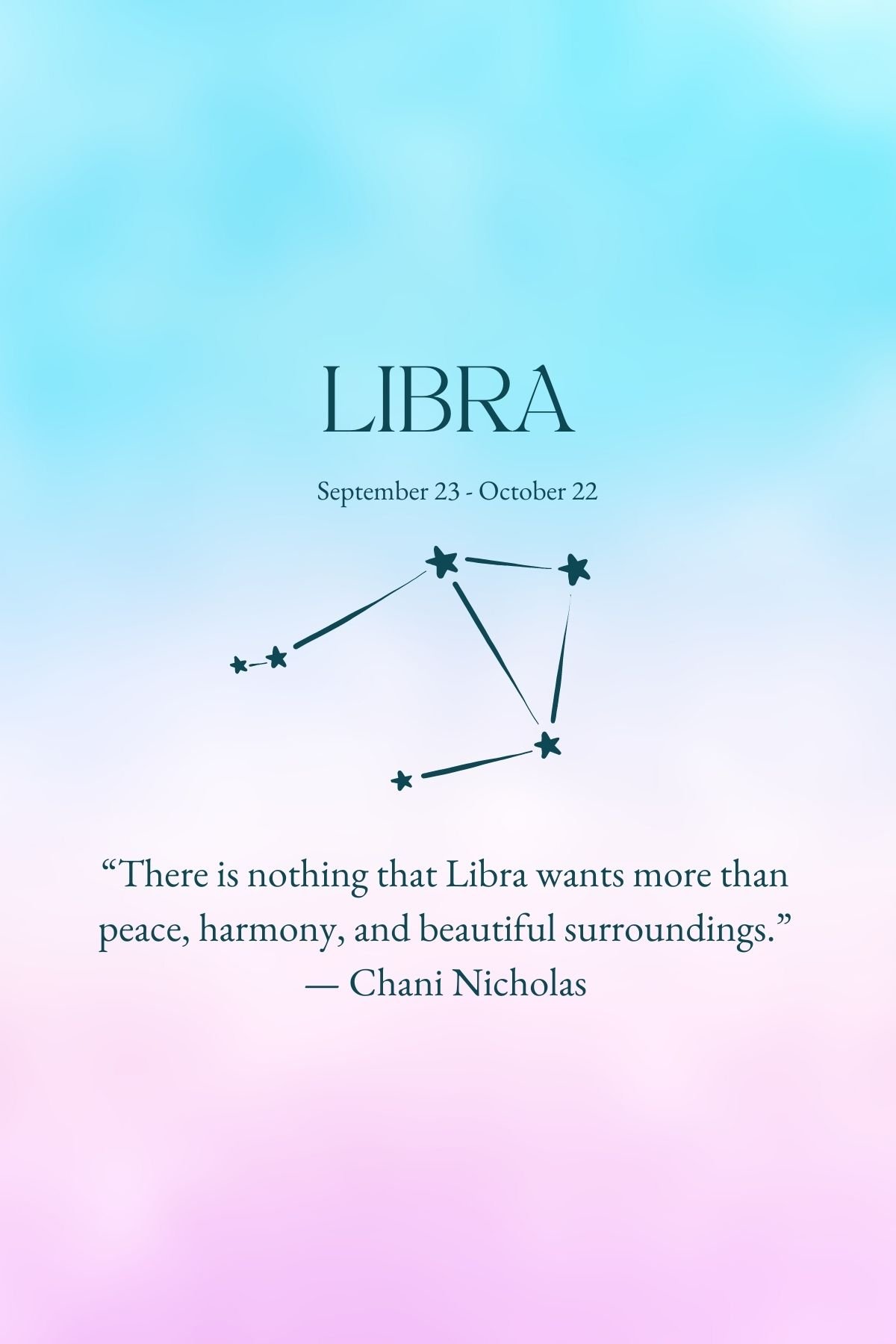 10. “After a breakup, a Libra will make do with the decision and be off to create an exciting new balance in their life.” — Unknown

11. “I’m a Libra. If someone compliments me, I’ll say something nice to them. I like to give out compliments.” — Amber Rose

12. “I’m too much of a Libra. I too often see the other person’s point of view and capitulate, even though I have strong political convictions.” – John Lithgow

13. “A Libra’s friendship and love is worth gold.” — Unknown

14. “Librans love people, but they hate large crowds. Like gentle doves of peace, they go around mediating and patching tip quarrels between others; still they enjoy a good argument themselves.” — Linda Goodman

15. “Librans have a gift of seeing something positive and lovable in almost anybody. Harmony in all aspects of life is their top priority.” — Therrie Rosenvald

16. “Libras love doing things for others, but they like to feel appreciated. A little thanks goes a long way.” — Unknown

17. “Libra’s will leave you speechless with sweet nothings.” — Unknown

18. “Libra only gets stubborn when people don’t take them seriously.” — Unknown

20. “Libra will make you feel special. That is their charm.” — Unknown

21. “Don’t rush a Libra. Something this good takes time.” — Unknown 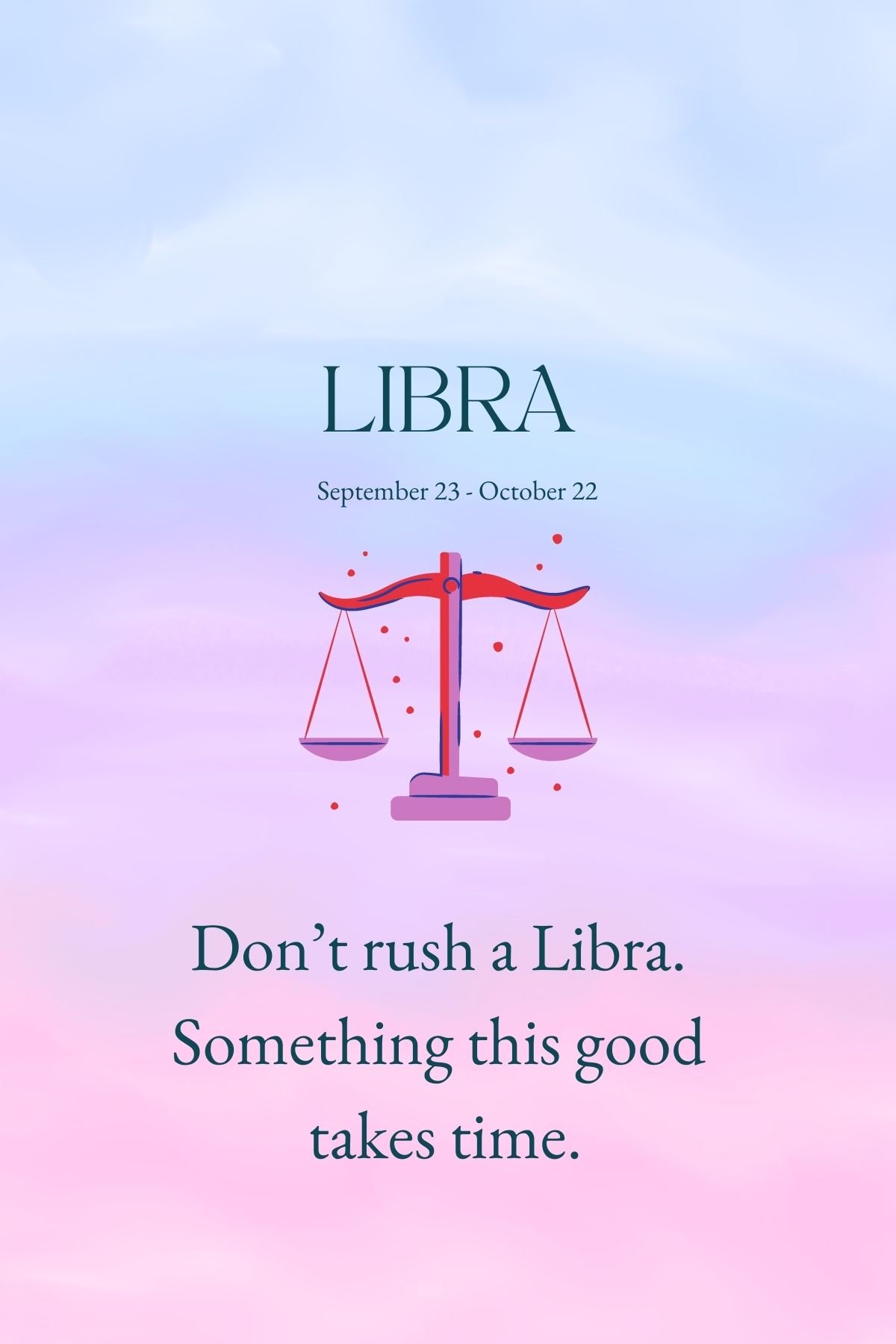 22. “A Libra is usually generous, provided you don’t take advantage of that.” — Unknown

23. “Sometimes in my life, I feel like a bit of a sorceress who can’t totally control all their power. I’m a Libra, so… Libra women are pretty magical.” — Olivia Thirlby

24. “I’ll just be over here avoiding confrontation and being a Libra.” — Unknown

26. “Libra’s are rarely wrong and they are usually right. So, arguing with them is pointless.” — Unknown

27. “Libra Dream: For the world to become a peaceful, happy place.” — Unknown

28. “A libra is skilled enough to be one step ahead, but make you believe they are one step behind.” — Unknown

30. “A Libra friend is analytical, rational, and fair, most of the time.” — Hazel Dixon-Cooper 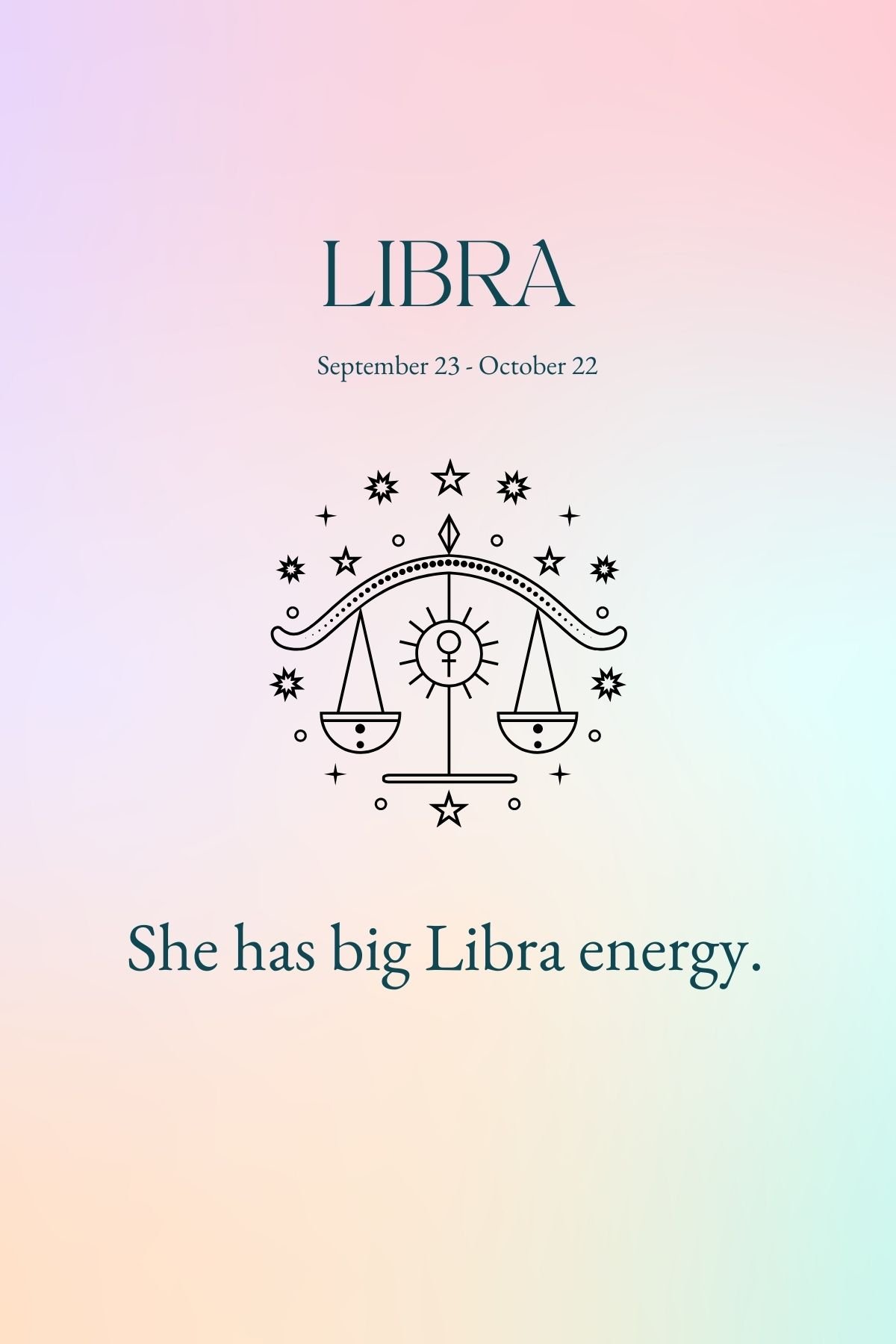 33. “Let the Libras of the world handle this one.”

35. “Welcome to Libra season, aka the chillest of them all.” — Unknown

36. “If Libra doesn’t say something, their face does all the work.” — Unknown

37. “Libras don’t fall for just anyone, so when they choose you know that it’s the real deal.” — Unknown

39. “I’ll just be over here avoiding confrontation and being a Libra.”

40. “Libras are charming individuals who can put on an array of faces to please anyone they are with.” — Unknown

41. “If Libra were a city, they’d be Paris. The moodiness of the Seine is more or less a portrait of their inner life.” — Alex Dimitrov and Dorothea Lasky

42. “When you get into an awkward situation, let a Libra do all the talking. They can negotiate themselves out of anything.” — Unknown

43. “Libras receive great pleasure by pleasing and helping others.” — Anonymous

44. The whole business with the fossilized dinosaur skeletons was a joke the paleontologists haven’t seen yet. This proves two things: Firstly, that God moves in extremely mysterious, not to say, circuitous ways. God does not play dice with the universe; Secondly, the Earth’s a Libra. — Terry Pratchett

45. Libras thrive in a harmonious atmosphere. Different from Leo, Libra let everyone shine. They inspire people around them to be their best versions. 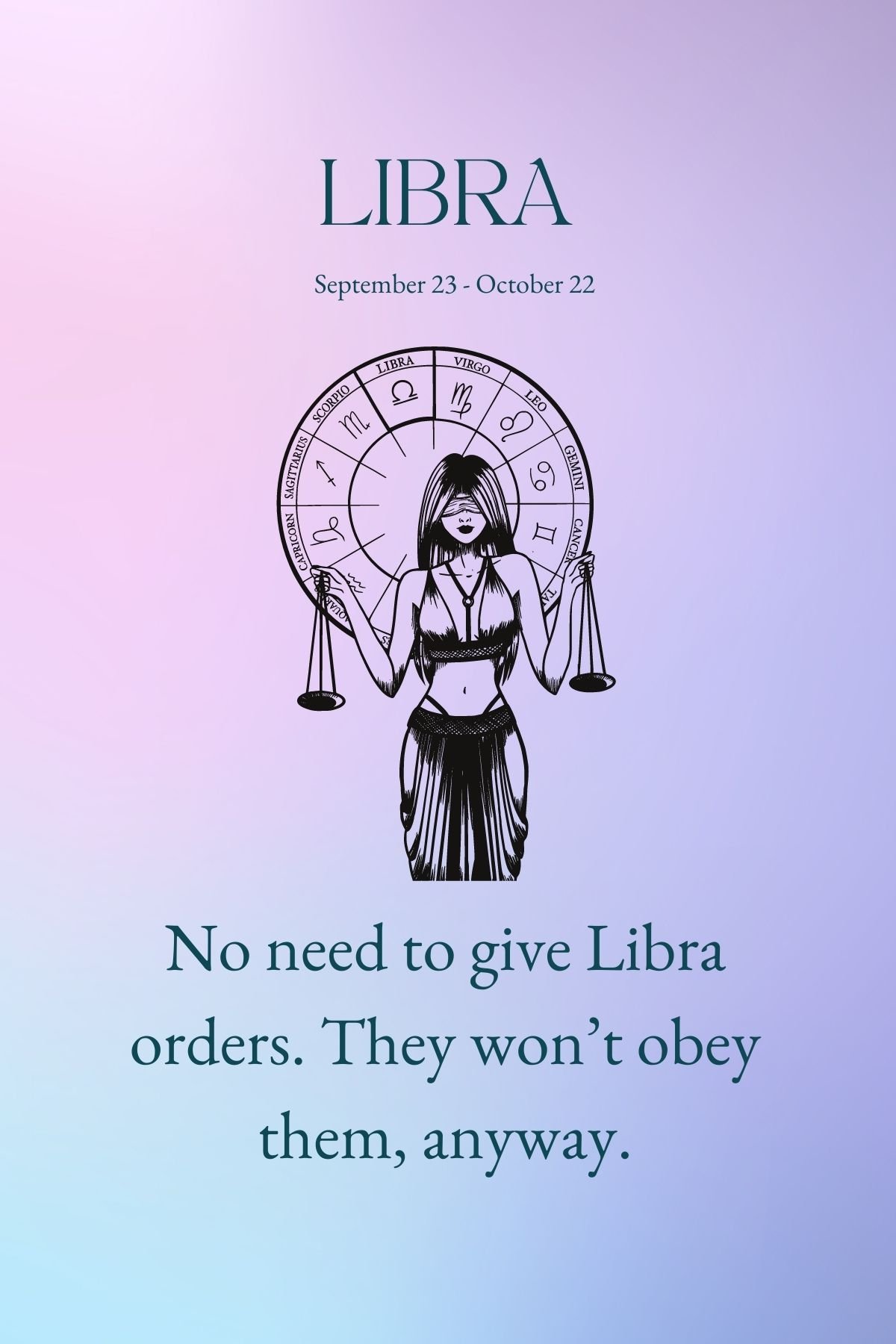 48. This Venus-ruled Sign is also known for having their good taste in art, decor and music. They may not be the most outrageous and avant-garde, but they never fail to impress with their elegance.

49. “Don’t mistake a Libra’s compassion for stupidity because they can see through all the bullshit.” — Unknown

51. Libra is the best friend. They always listen and never judge.

52. “Beware of the sudden Libra mood swings. Yes, they do seem to come out of nowhere sometimes.” — Unknown

53. “Libra’s will leave you speechless with sweet nothings.” — Unknown

54. “Type of lover a Libra is: You never have to question if they love you, because they show it every chance they get.”

55. “Don’t let Libra’s romantic softness and love for peace fool you, they can get ruthless.” — Unknown

56. Libras strive for harmony in their relationships and will go to great lengths to please their partner. 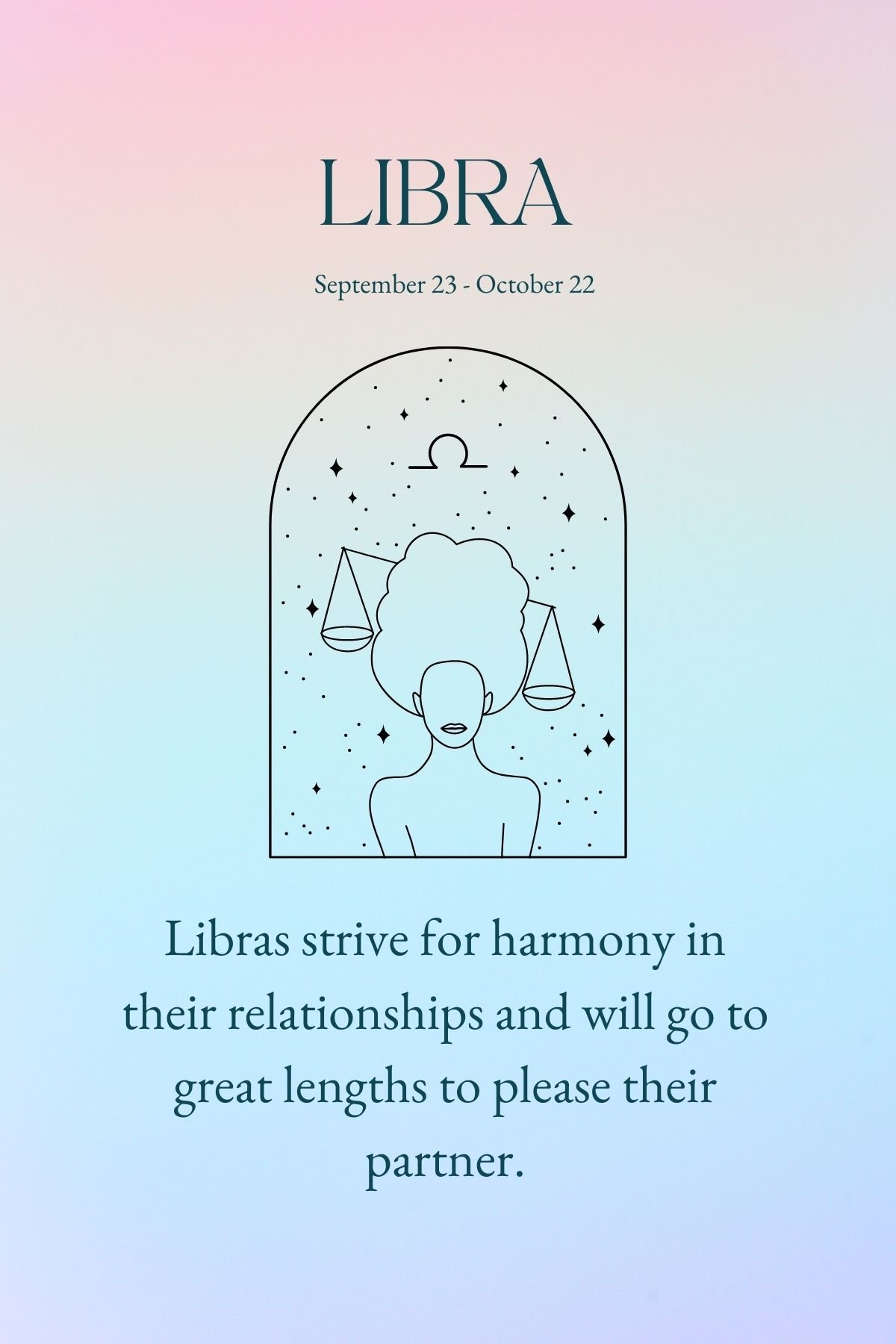 58. You’ll feel proud having your Libra partner on your arm.

59. “Libras are master kissers and can be master seducers once they set their eyes on you.” — Unknown

60. “A Libra will love you even at your absolute worst, but push it too far and they have a hard time forgiving and forgetting.” — Unknown

61. “A Libra is the right blend of beauty and brains to make the ideal lover.” — Unknown

Libras are the Diplomats of the Zodiac

64. Libra can be self-critical even when everyone loves them. 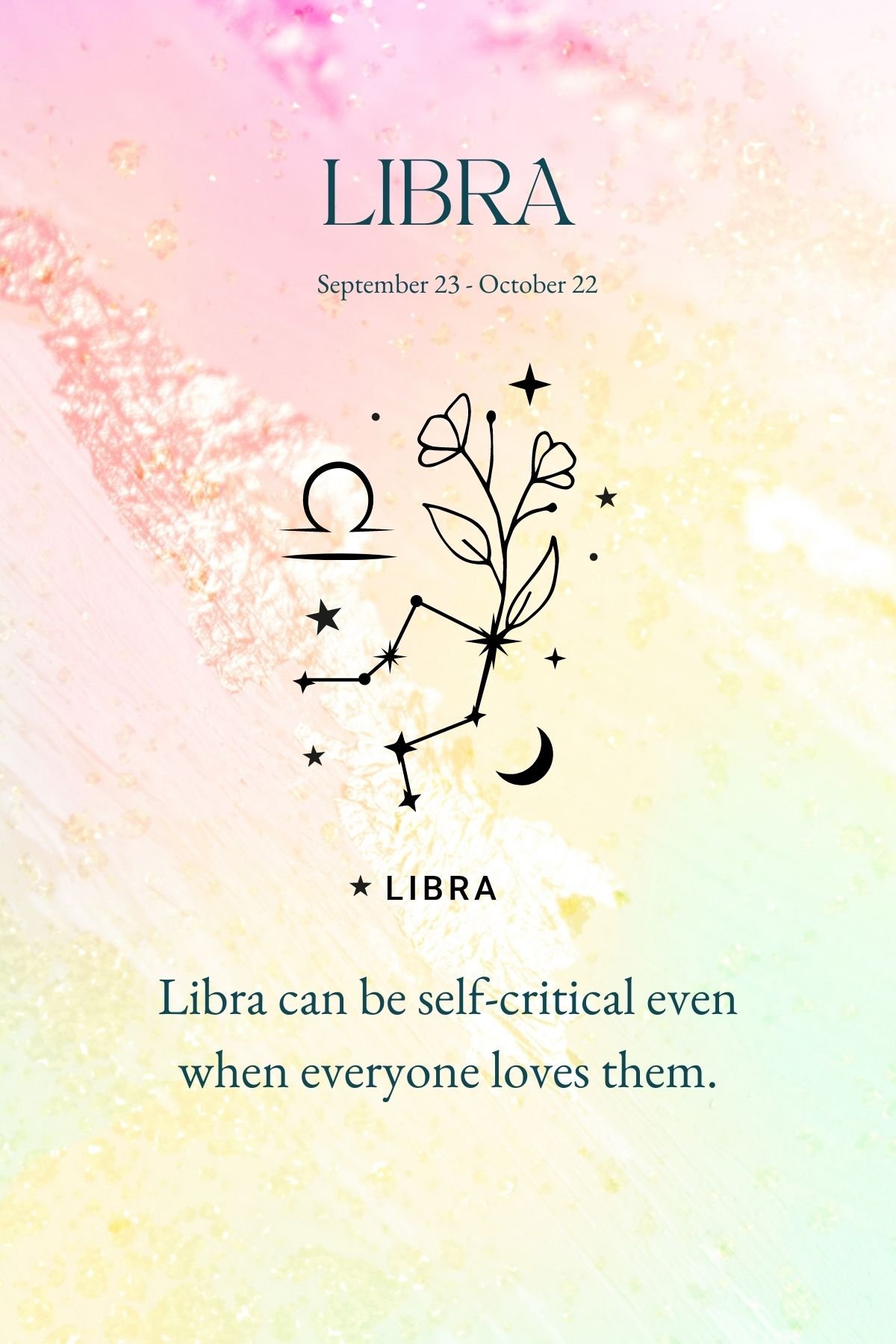 65. “No surprise that Judge Judy is a Libra—it is the sign of the law, after all!” — Judge Judy

66. Libra has a hard time figuring out what they want. But if they want something, they will get it no matter what it takes.

67. “Libras are the diplomats of the zodiac. They are able to put themselves in other’s shoes and see things through another person’s point of view.” – Daniel E. Ouellette

68. Libra be like: solves everyone’s problems but their own.

69. “Libras don’t indulge in idle flattery. If they don’t like something, they are tactful enough to remain silent.” – Margarete Beim

70. “The Libra husband is reasonable. He is a born judge, and no other zodiacal type can order his life with so much wisdom.” God! That’s all I need: order! That’s all I need: an M ordered life. You know, a manager. But he’s *got* to be a Libran.”— Edith ‘Little Edie’ Bouvier Beale

55. “Still, not all of the beautiful people in the world are Librans.” – Linda Goodman

56. Libra be like: want everyone to love them and will sacrifice for approval 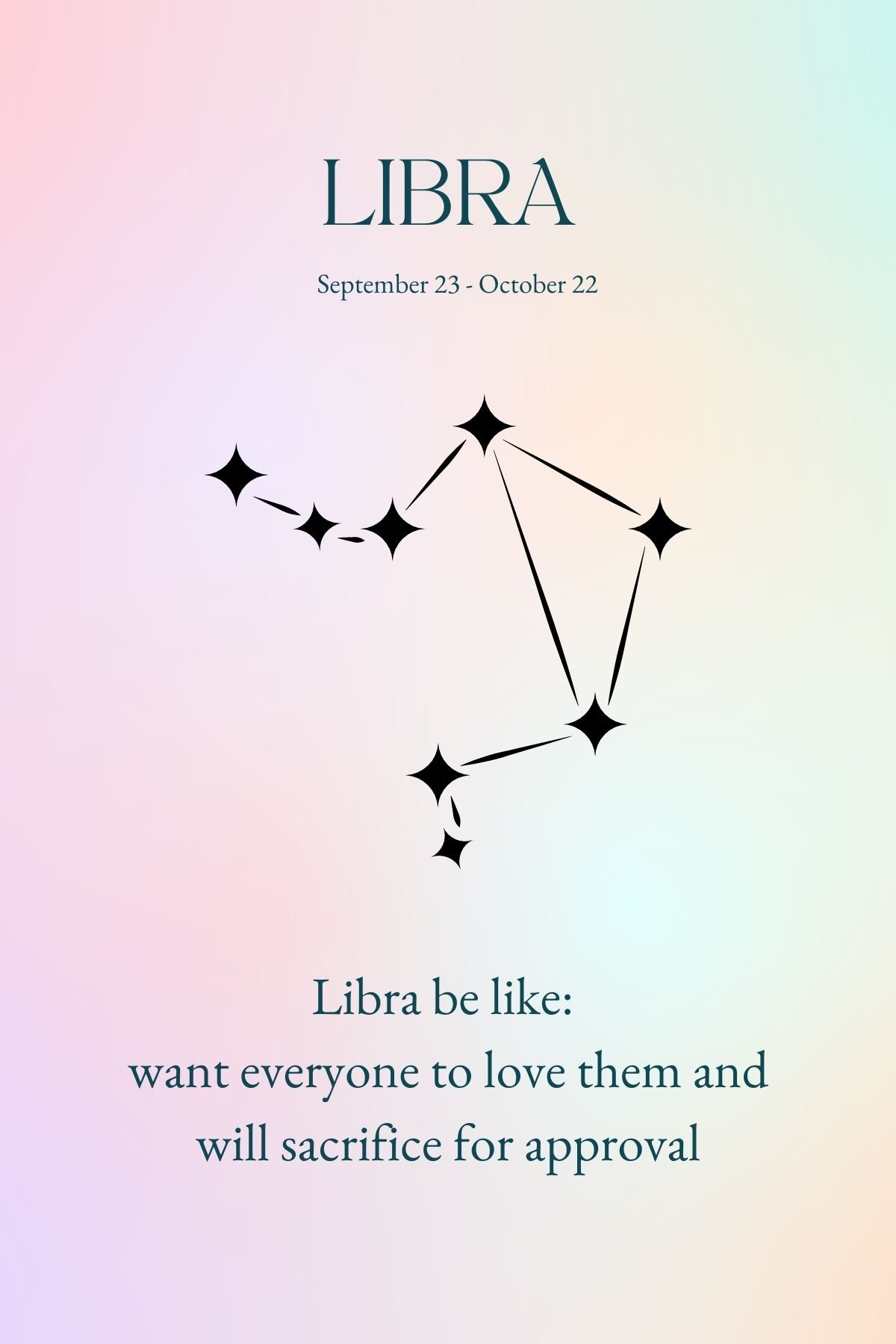 57. “When Libra asks your opinion—and that’s likely to be often—don’t think that this intelligent individual is incapable of wise, often brilliant strategies and decisions.” – John Mesina

59. “Libra is even nice to the people he or she doesn’t get on with, for Libra doesn’t like to have enemies.” – Claire Petulengro

61. “The hesitation of a Libra person comes from the fear that if they make a decision, someone might be disappointed, and they would like everyone to feel taken care of.” – Saket Shah

64. “As a friend, it’s hard to know if you’ve ever really helped a Libra.” — Alex Dimitrov

65. Sometimes Libras want others to feel happy so bad that they forget to make themselves happy.

66. “Libras can see both sides of the coin but have difficulty determining who is right and who is wrong.” — Serina Cappucci

67. “You’ll know if your Libra is seriously under-loved when they won’t even argue with you, and just act passively.” — Mary English

69. “Libra is seen as the only inanimate sign and sector of, “Peace in the heavens”, and yet Libra energy can also become anger in the form of open combat against known enemies.” — Michael St Clair

70. For Libras loyalty to the people they care about and love is second nature to them.

71. “Sometimes Libra can be coaxed gently into trusting his own emotions in an atmosphere of trust.” — Liz Greene

72. Traveling to new cities or countries and visiting popular tourist sights is not uncommon for Libras

73. Someone who is born as a Libra loves beauty. For them, they see the beauty in nearly everything.