Presidents Day is celebrated on the third Monday of February to honor iconic presidents. It is a time to celebrate the courage, conviction, and contributions of our national statesmen and American presidents.

On this day, people across the nation have an opportunity to explore the life and contributions of America’s past leaders with activities that showcase their greatest accomplishments.

A wonderful way to celebrate presidents day is by reading some of the most inspiring quotes by America’s best leaders. Share which of these presidents day quotes was your favorite. 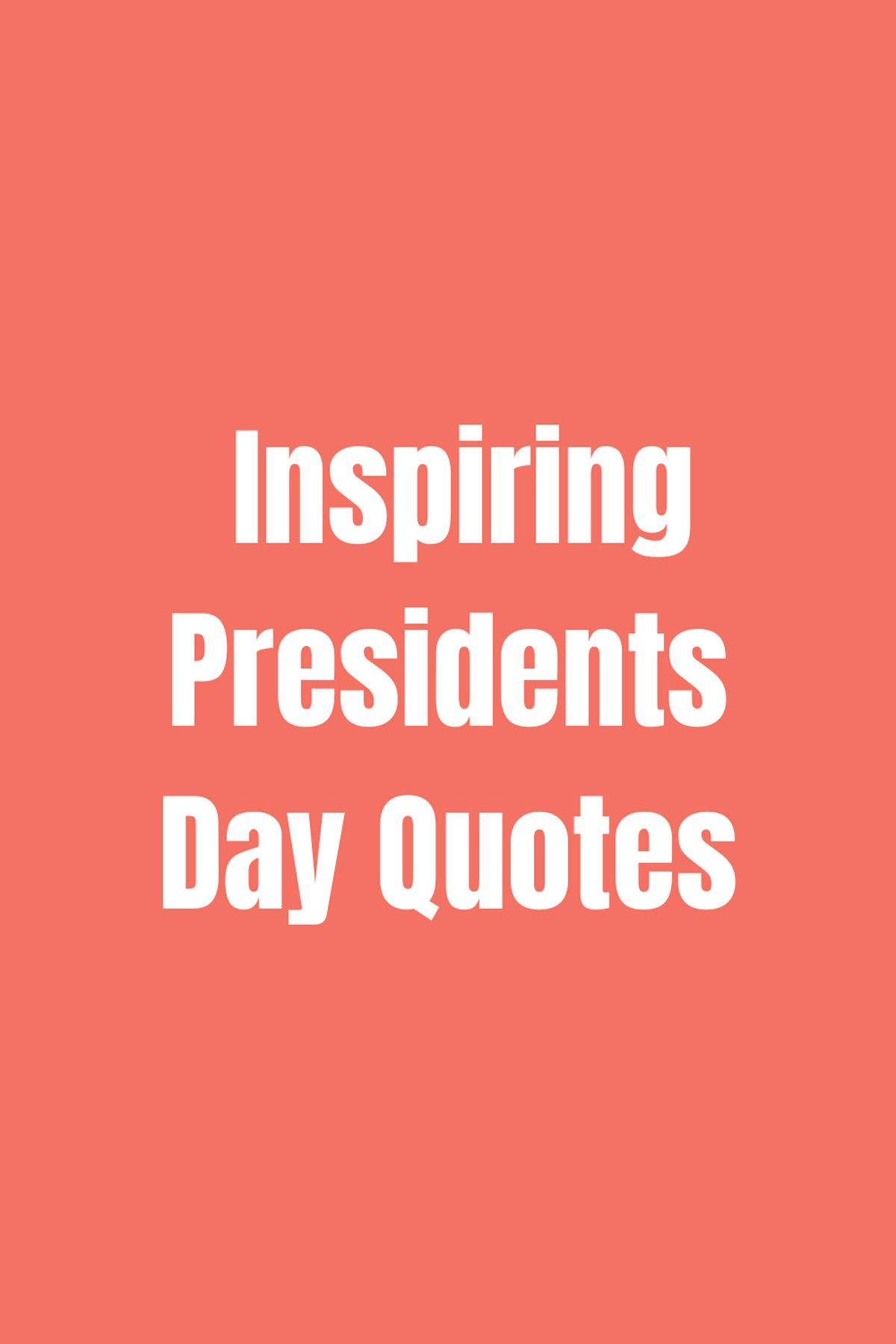 1. “The harder the conflict, the greater the triumph.” – George Washington

2. “The advancement and diffusion of knowledge is the only guardian of true liberty.” – James Madison

3. “Honesty is the first chapter of the book wisdom.” – Thomas Jefferson

4. “Nearly all men can stand adversity, but if you want to test a man’s character, give him power.” – Abraham Lincoln

5. “America was not built on fear. America was built on courage, on imagination and an unbeatable determination to do the job at hand.” – Harry S. Truman

6. “Posterity — you will never know how much it has cost my generation to preserve your freedom. I hope you will make good use of it.” – John Quincy Adams

7. “The American, by nature, is optimistic. He is experimental, an inventor and a builder who builds best when called upon to build greatly.” – John F. Kennedy

8. “Far better it is to dare mighty things, to win glorious triumphs, even though checkered by failure, than to take rank with those poor spirits who neither enjoy much nor suffer much, because they live in the gray twilight that knows neither victory nor defeat.” – Theodore Roosevelt

9. “You can do what you have to do, and sometimes you can do it even better than you think you can.” – Jimmy Carter

10. “It is hard to fall, but it is worse never to have tried to succeed.”  – Franklin Roosevelt

11. “We must work to bind up the wounds of a suffering world — to build an abiding peace, a peace rooted in justice and in law.” – Dwight D. Eisenhower

12. “Conformity is the jailer of freedom and the enemy of growth.” – Bill Clinton

14. “Leadership to me means duty, honor, country. It means character, and it means listening from time to time.” – George W. Bush

15. “We can’t help everyone, but everyone can help someone.” – Ronald Reagan 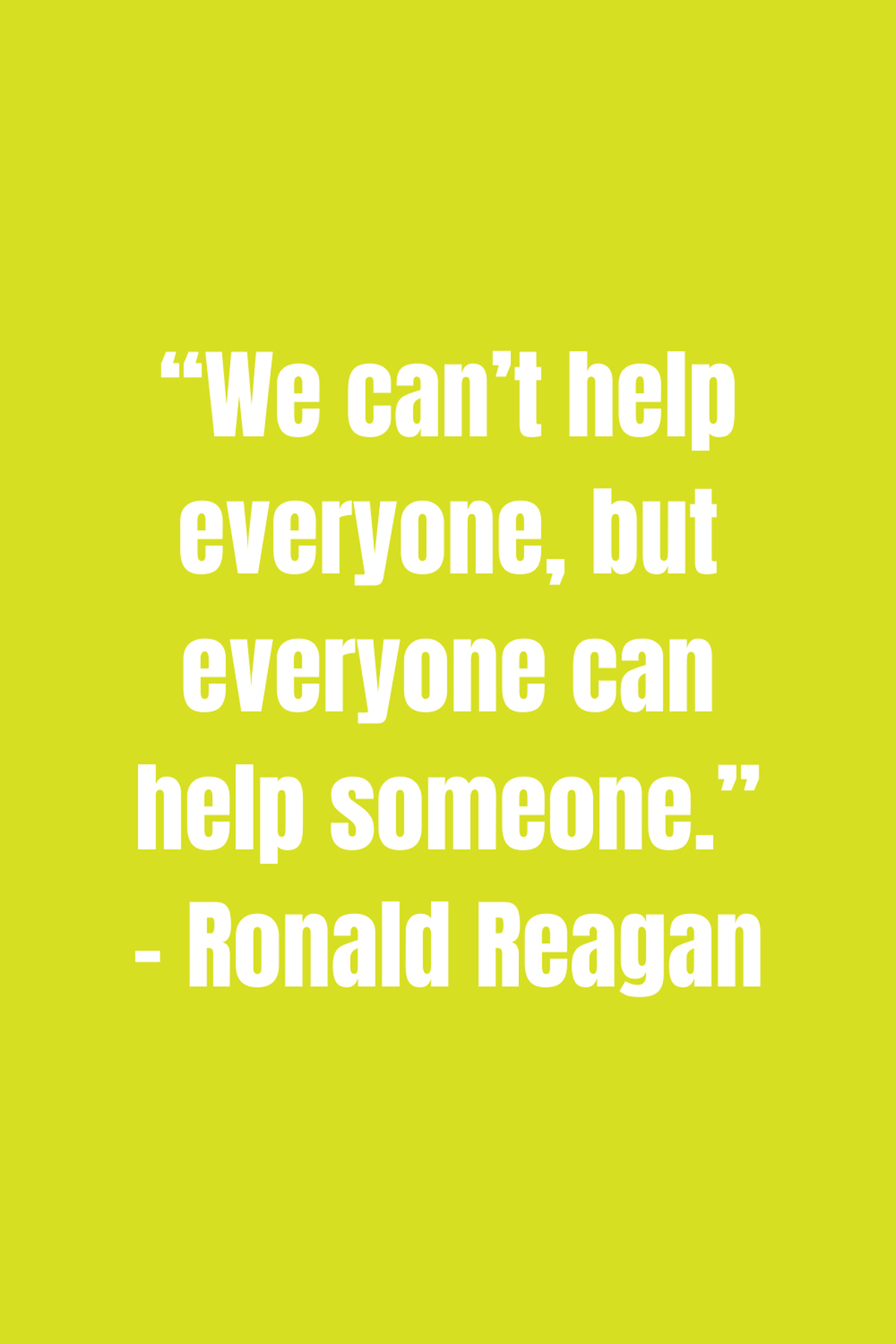 17. “One man with courage makes a majority.” ― Andrew Jackson

19. “There is nothing more corrupting, nothing more destructive of the noblest and finest feelings of our nature, than the exercise of unlimited power.” ― William Henry Harrison

20. “You don’t know what you can miss before you try.” ― Franklin Pierce

21. “There are men and women who make the world better just by being the kind of people they are. They have the gift of kindness or courage or loyalty or integrity. It really matters very little whether they are behind the wheel of a truck or running a business or bringing up a family. They teach the truth by living it.” ― James Garfield

22. “Words without actions are the assassins of idealism.” ― Herbert Hoover

23. “Our country may be likened to a new house. We lack many things, but we possess the most precious of all – liberty.”  – James Monroe

24. “Every good citizen makes his country’s honor his own, and cherishes it not only as precious but as sacred. He is willing to risk his life in its defense and is conscious that he gains protection while he gives it.” –  Andrew Jackson

25. “I should be pleased to see all the nations on the earth prosperous and happy and rich, for it would furnish to me the best evidence of the prosperity of my native land.” – John Tyler

26. “No president who performs his duties faithfully and conscientiously can have any leisure.” – James K. Polk

27. “In all disputes between conflicting governments, it is our interest not less than our duty to remain strictly neutral.” – Zachary Taylor

28. “God knows I detest slavery but it is an existing evil, and we must endure it and give it such protection as is guaranteed by the Constitution.” – Millard Fillmore

29. “The test of leadership is not to put greatness into humanity, but to elicit it, for the greatness is already there.” – James Buchanan

30. “In every battle there comes a time when both sides consider themselves beaten, then he who continues the attack wins.” –  Ulysses S. Grant

These presidents day quotes are perfect to share on your socials!

31. “If conscience disapproves, the loudest applauses of the world are of little value.” – Thomas Jefferson

32. “On matters of style, swim with the current, on matters of principle, stand like a rock.” – James Madison

33. “The advancement and diffusion of knowledge is the only guardian of true liberty.” – James Monroe

34. “The best form of government is that which is most likely to prevent the greatest sum of evil.” – John Quincy Adams

35. “Courage and perseverance have a magical talisman, before which difficulties disappear and obstacles vanish into air.” – Andrew Jackson

36. “Any man worth his salt will stick up for what he believes right, but it takes a slightly better man to acknowledge instantly and without reservation that he is in error.” – Martin Van Buren

37. “It is easier to do a job right than to explain why you didn’t.” – William Henry Harrison

39. “Peace, plenty, and contentment reign throughout our borders, and our beloved country presents a sublime moral spectacle to the world.” – Zachary Taylor

40. “An honorable defeat is better than a dishonorable victory.” – Franklin Pierce

41. “The test of leadership is not to put greatness into humanity, but to elicit it, for the greatness is already there.” – Abraham Lincoln

42. “If you always support the correct principles then you will never get the wrong results!” – Ulysses S. Grant

43. “In every battle there comes a time when both sides consider themselves beaten, then he who continues the attack wins.” – Rutherford B. Hayes

44. “Right reason is stronger than force.” – Chester A. Arthur

45. “It is hard to fail, but it is worse never to have tried to succeed.” – William Howard Taft

46. “A government is for the benefit of all the people.” – Woodrow Wilson

47. “My country owes me nothing. It gave me, as it gives every boy and girl, a chance. It gave me schooling, independence of action, opportunity for service and honor.” – Franklin D. Roosevelt 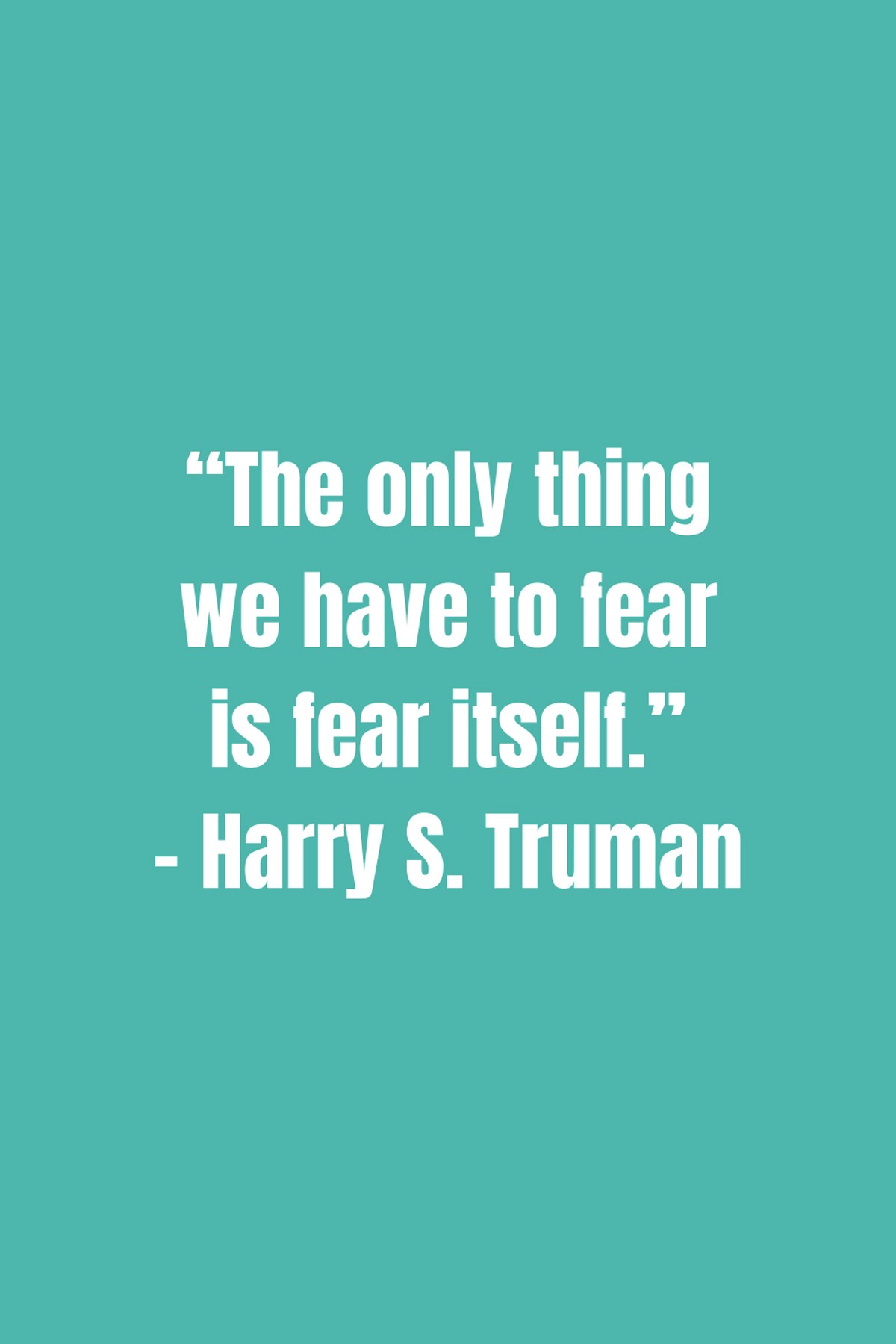 49. “It’s amazing what you can accomplish if you do not care who gets the credit.” – Dwight D. Eisenhower

50. “A people that values its privileges above its principles soon loses both.” – John F. Kennedy

51. “Our progress as a nation can be no swifter than our progress in education. The human mind is our fundamental resource.” – Lyndon B. Johnson

52. “Yesterday is not ours to recover, but tomorrow is ours to win or lose.” – Richard Nixon

53. “We cannot learn from one another until we stop shouting at one another – until we speak quietly enough so that our words can be heard as well as our voices.” – Gerald Ford

55. “You can do what you have to do, and sometimes you can do it even better than you think you can.” – Ronald Reagan

56. “We are a nation of communities… a brilliant diversity spread like stars, like a thousand points of light in a broad and peaceful sky.” – William “Bill” Clinton

57. “There is nothing wrong with America that cannot be cured with what is right in America.” – George W. Bush 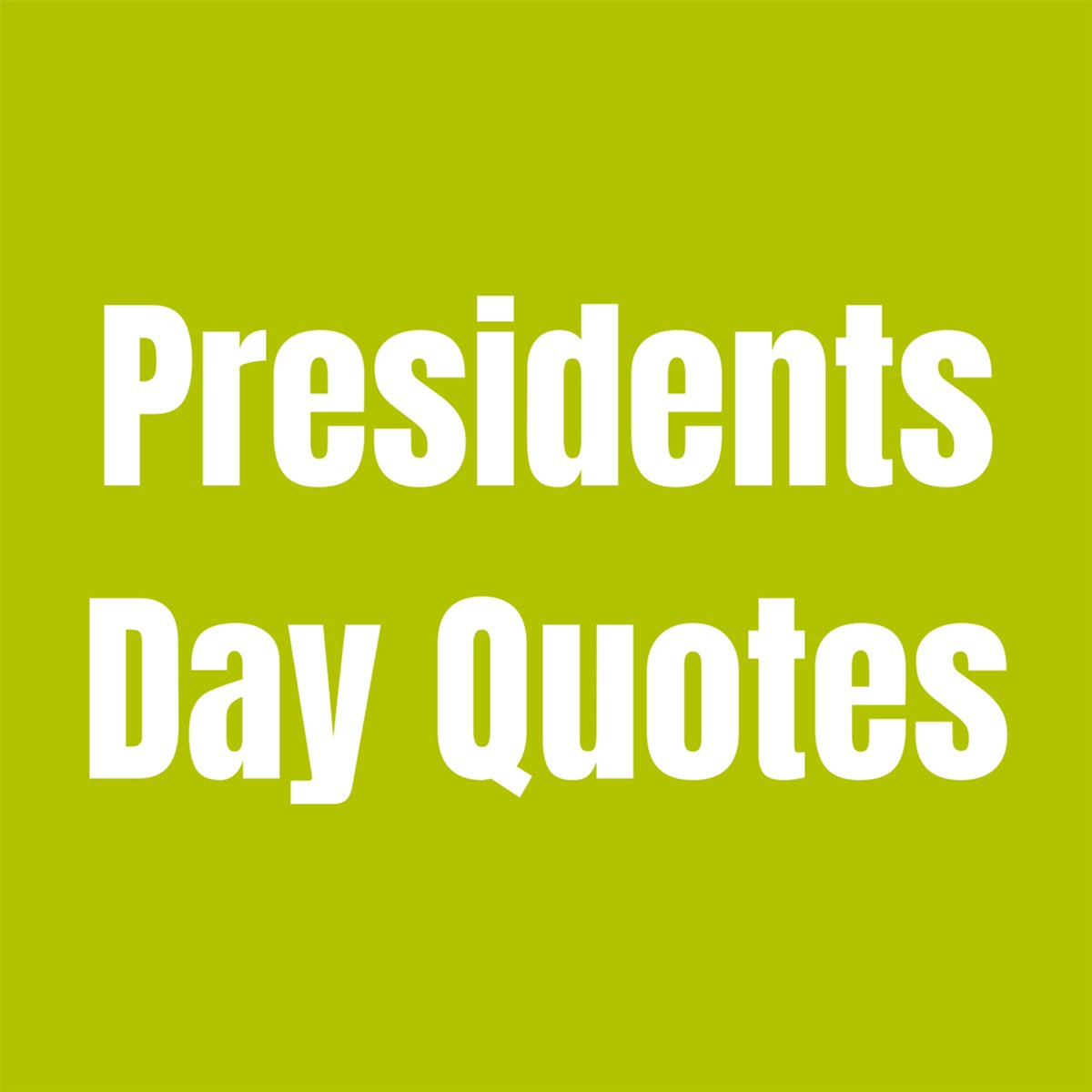