Inside: Protest Quotes That Will Make a Change.

Protests bring attention to the work that must be done for equality and safety.

It takes courage to use your voice to protest the status-quo. We hope these quotes help inspire you to share your stance on social media or a protest sign. There is always progress to be made, and inspiration is always necessary. 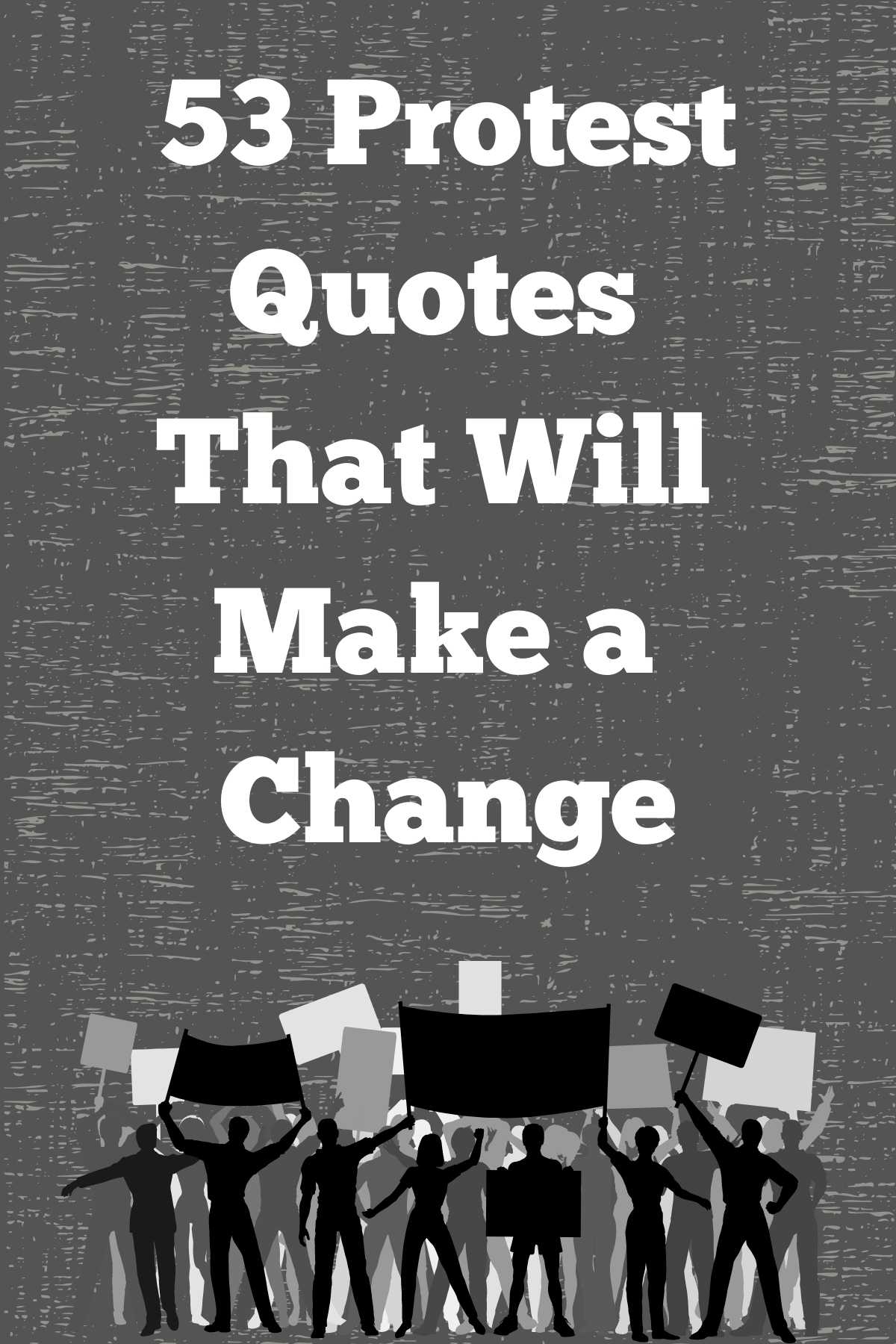 11 Protest Quotes That Will Make a Change

2. “Never be afraid to raise your voice for honesty and truth and compassion against injustice and lying and greed. If people all over the world… would do this, it would change the earth.” -William Faulkner

3. “Get in good trouble, necessary trouble, and help redeem the soul of America.” -John Lewis 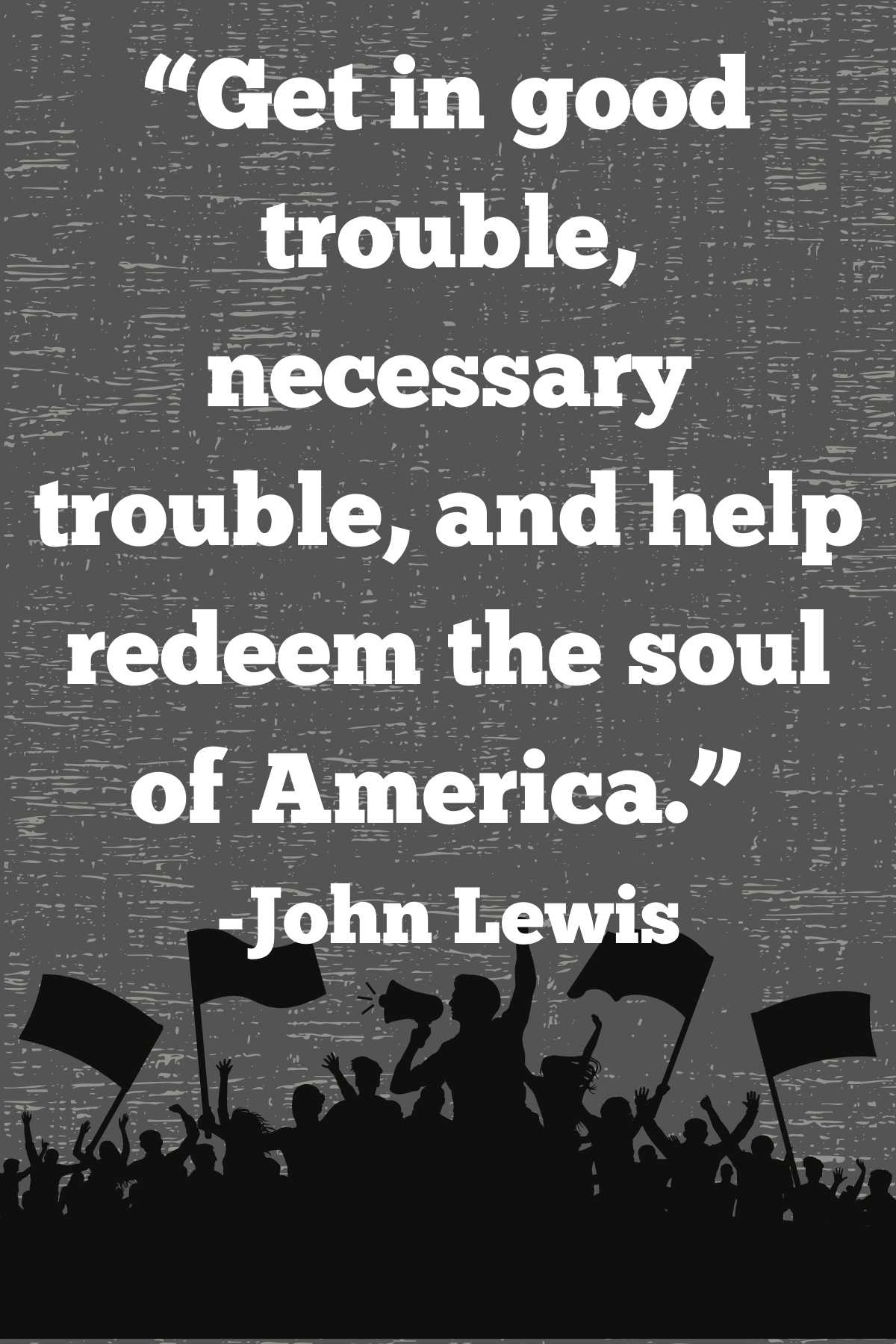 4. “When an individual is protesting society’s refusal to acknowledge his dignity as a human being, his very act of protest confers dignity on him.” -Bayard Rustin

6. “Never in history has violence been initiated by the oppressed. How could they be the initiators, if they themselves are the result of violence?” -Paulo Freire

7. “The purpose of protest to provoke a response. Trouble is some people prefer to address the appropriateness of the protest not the issue.” -Jeffrey G. Duarte

9. “Democracy is about the dialogue; protest is about initiating the dialogue and freedom of speech is about respecting each other’s dialogue.” -Ankit Mishra

10. “Peaceful protest is a hallmark of our democracy. It has been an impetus for social change throughout our history.” -Stan Van Gundy

11. “Small acts, when multiplied by millions of people, can quietly become a power no government can suppress, a power than can transform the world.” -Howard Zinn

12. “He who passively accepts evil is as much involved in it as he who helps to perpetrate it. He who accepts evil without protesting against it is really cooperating with it.” -Martin Luther King Jr.

14. I refuse to stand by and not use my voice to bring action.

15. You have awakened the sleeping giant.

16. You know things are serious when the introverts arrive.

18. “It is better to protest than to accept injustice.” -Rosa Parks

19. “It is a sin to be silent when it is your duty to protest.” -Abraham Lincoln

20. It is our duty to fight for our freedom.

21. “If you are neutral in situations of injustice, you have chosen the side of the oppressor. If an elephant has its foot on the tail of a mouse, and you say that you are neutral, the mouse will not appreciate your neutrality.” – Desmond Tutu

22. “To spend one’s life being angry, and in the process doing nothing to change it, is to me ridiculous. I could be mad all day long, but if I’m not doing a damn thing, what difference does it make?” -Charles Fuller

23. “Being brave doesn’t mean you aren’t scared. Being brave means you are scared, really scared, badly scared, and you do the right thing anyway.” -Neil Gaiman 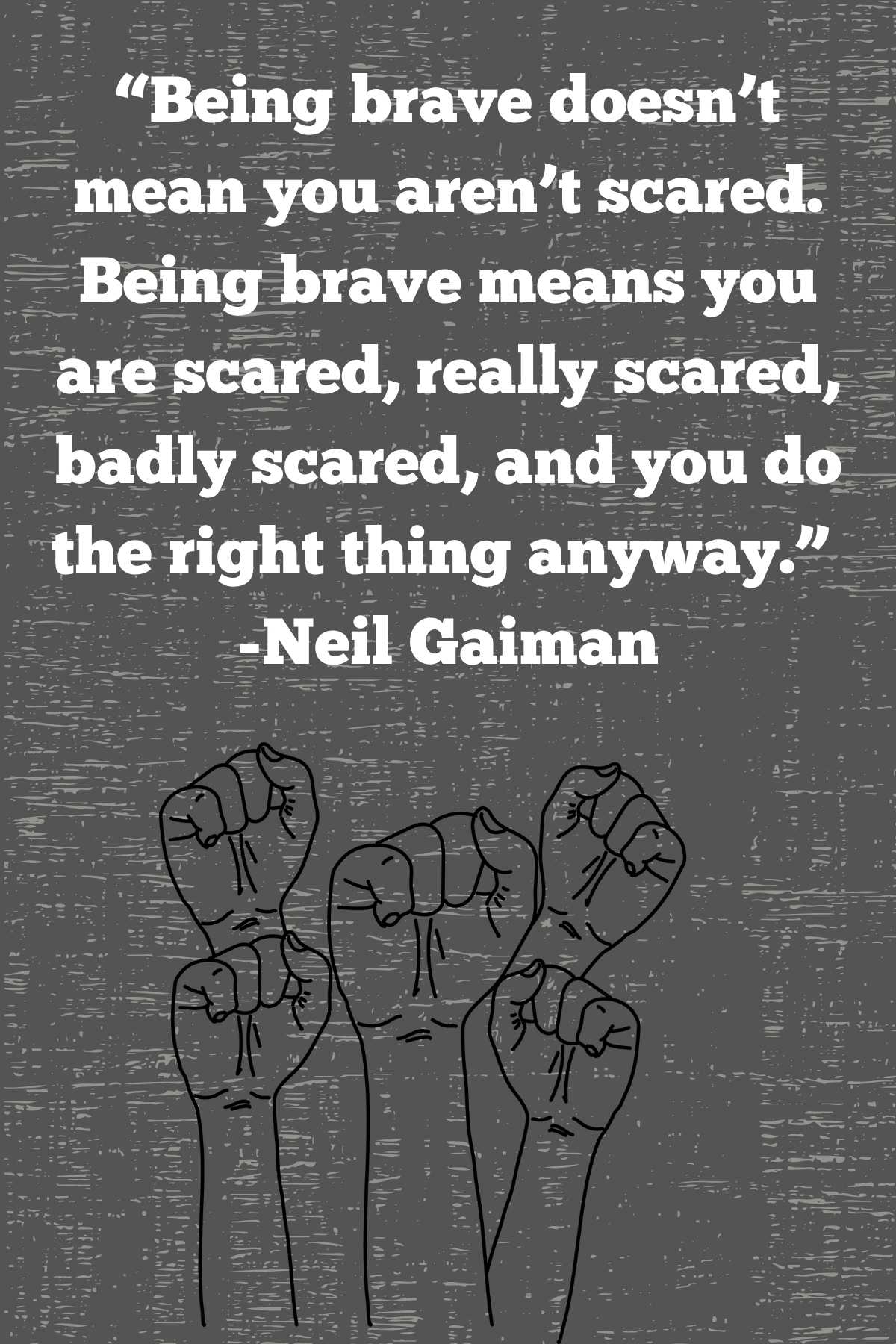 24. “It was civil disobedience that won them their civil rights.” -Tariq Ali

25. “You can’t tiptoe toward justice. You can’t walk up to the door all polite and knock once or twice, hoping someone’s home. Justice is a door that, when closed, must be kicked in.” -Daniel José Older

26. “You are never too small to make a difference” -Greta Thunberg

28. “Nobody need wait a single moment before starting to improve the world.” -Anne Frank

30. “I hate to hear you talk about all women as if they were fine ladies instead of rational creatures. None of us want to be in calm waters all our lives.” -Jane Austen

31. “They’ll tell you you’re too loud, that you need to wait your turn and ask the right people for permission. Do it anyway.” -Alexandria Ocasio Cortez

32. “I am not free while any woman is unfree, even when her shackles are very different from my own.” -Audre Lorde

33. “It took me quite a long time to develop a voice, and now that I have it, I am not going to be silent.” -Madeleine Albright

34. “There is no limit to what we, as women, can accomplish.” -Michelle Obama 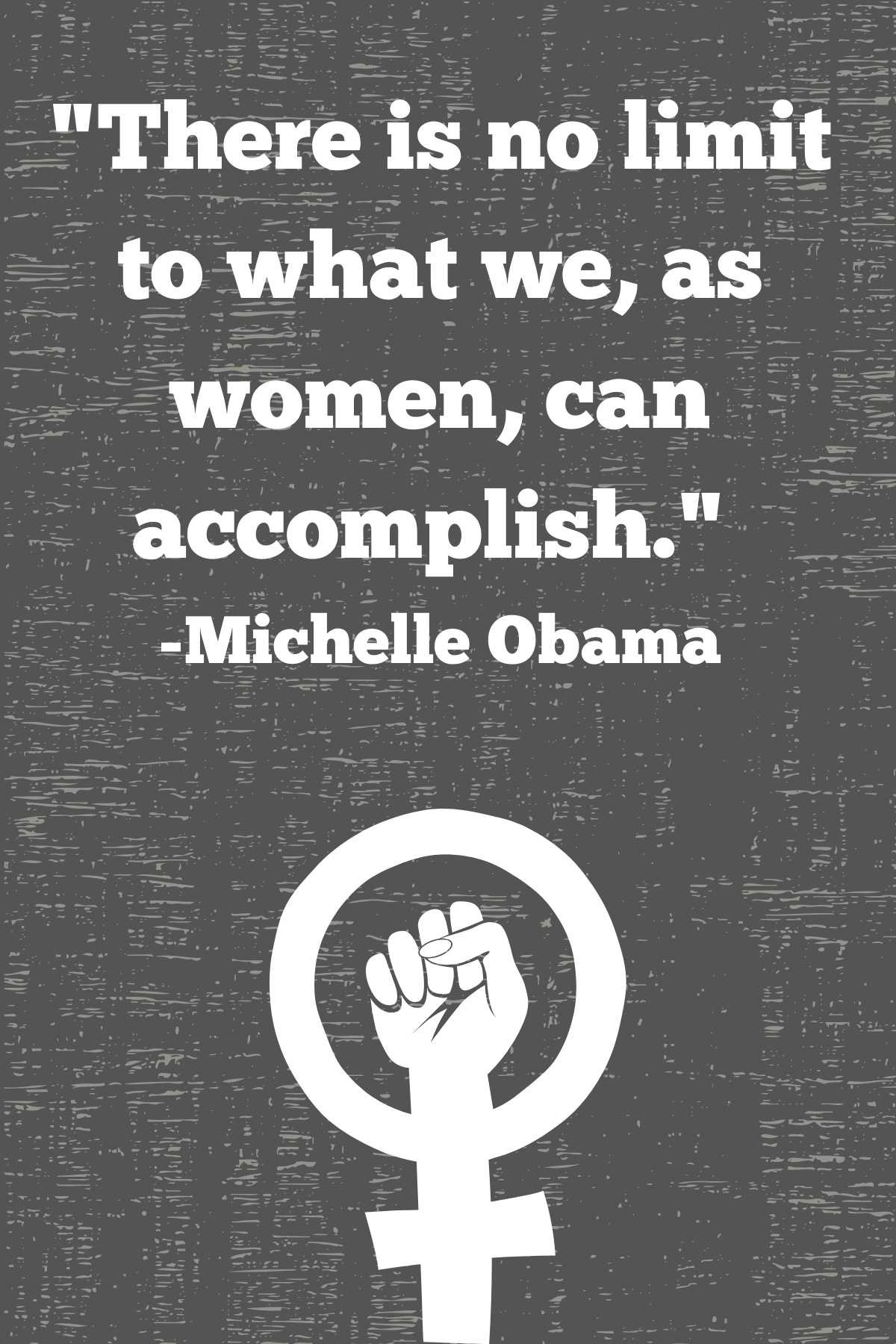 35. “We need women at all levels, including the top, to change the dynamic, reshape the conversation, to make sure women’s voices are heard and heeded, not overlooked and ignored.” -Sheryl Sandberg

36. “No woman should be told she can’t make decisions about her own body. When women’s rights are under attack, we fight back.” –Kamala Harris

38. Democracy only works if you do

41. Injustice anywhere is a threat to justice everywhere 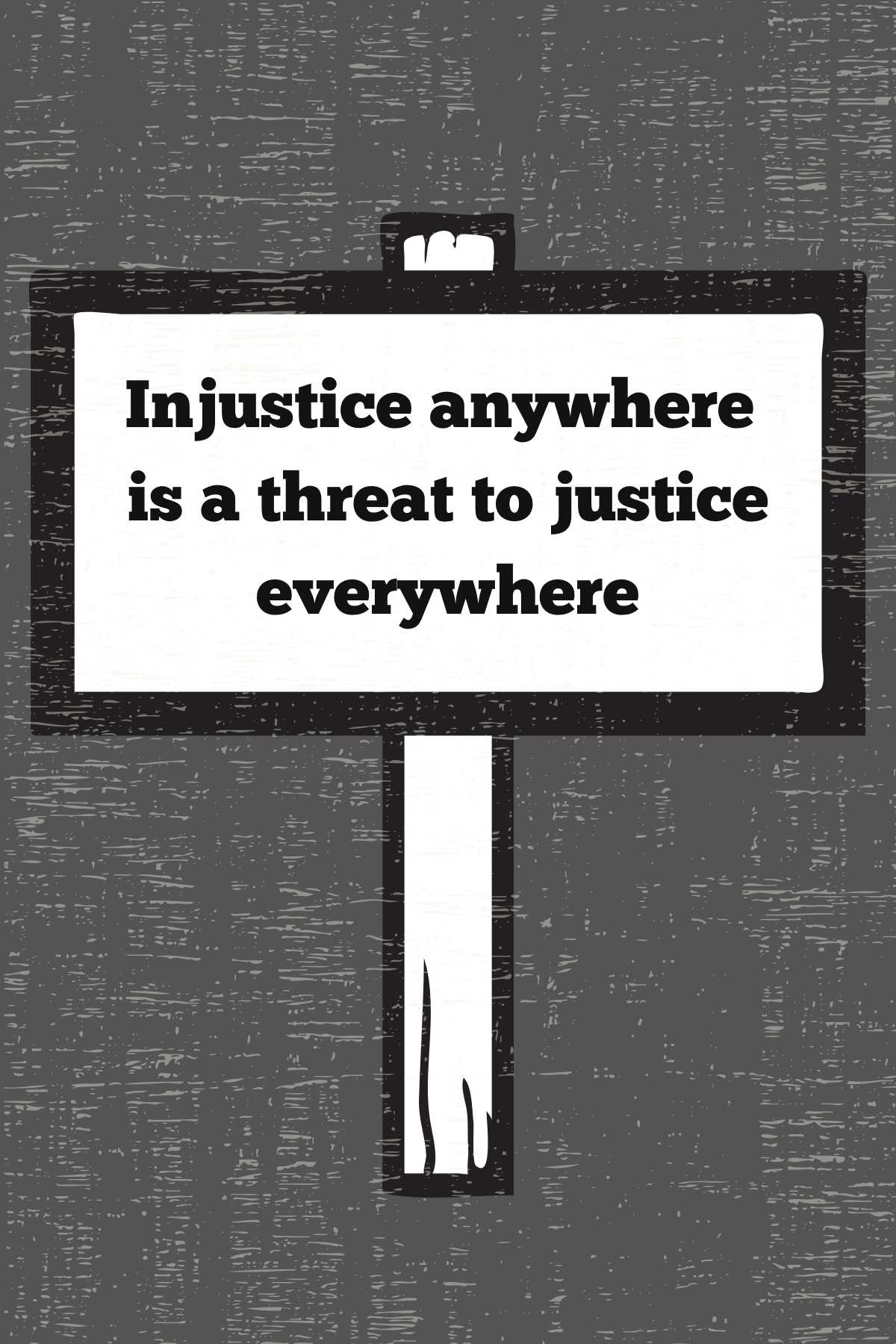 43. Keep your laws off my body

44. Equal rights for all

45. Equal healthcare for all

Sometimes your Protest quotes are better put to song! Here are some quotes with rhythm to get your march off on the right foot.

51. “Hey, teachers, leave those kids alone / All in all you’re just another brick in the wall” –Pink Floyd

52. “How many daughters, tell me, how many sons / Do we have to have to put in the ground / Before we just break down and face it / We got a problem with guns?” -The Killers

53. “The battle outside ragin’ / Will soon shake your windows and rattle your walls / For the times, they are a-changin'” -Bob Dylan

To everyone going out there and using your voice to bring about change: we see you, we applaud you and we wish safety for you!